New York is one of the greatest city in the world.

The city is the location to Broadway, a major entertainment center; and Wall Street, the world’s leading financial district.

The big apple’s real estate is one of the most expensive, making it the home of most billionaires.

It is aptly so that they equally have great architectural model makers in New York city, hence, RJ Models.

RJ Models fill the gaps in this diversity by creating miniature architectural masterpieces that everyone is able to grasp and appreciate.

An architectural scale model must possess all the given qualities as the designer envisioned.

It must act as an effective tool so the concepts of proposed and completed projects are conveyed seamlessly.

And our architectural model makers in New York City (NYC) does just that and more.

It only entails that our architectural model makers in New York City provide you with unmatched professional service known worldwide. 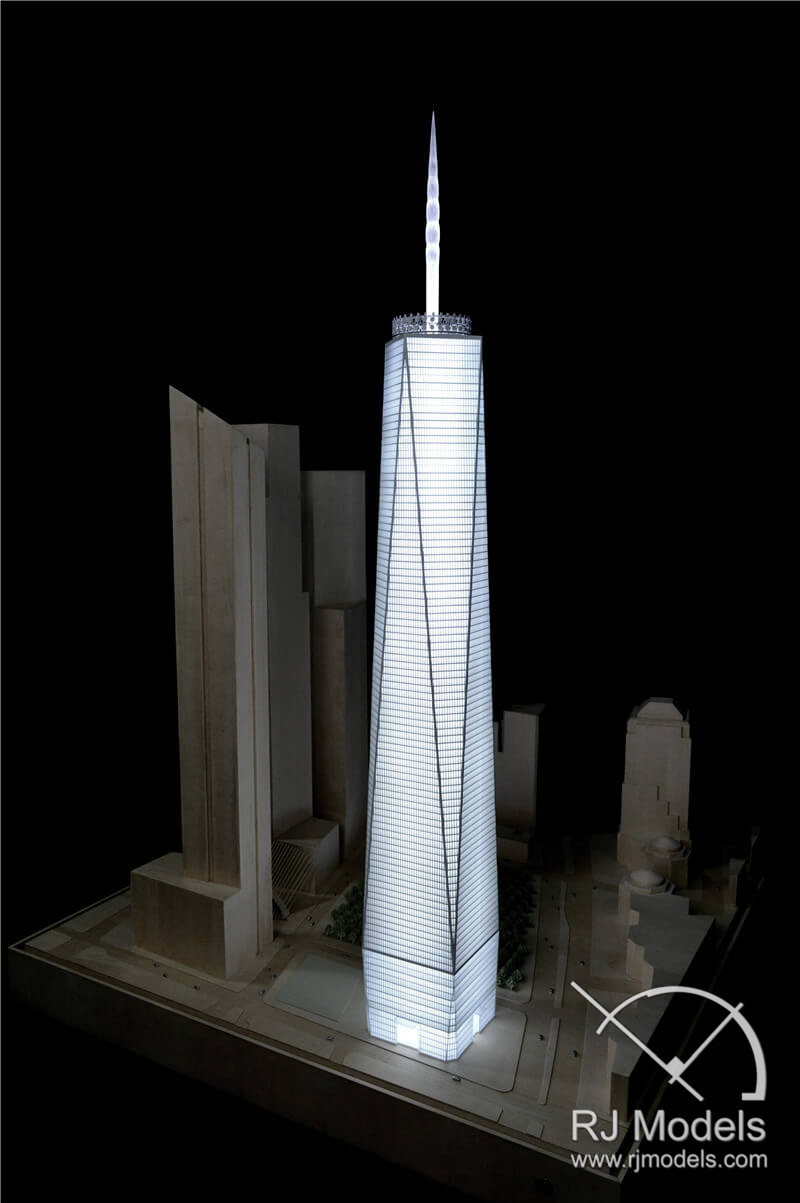 The unfortunate event of  9/11 never stopped the World Trade Center to rise and soar to new heights again.

RJ Models brings to the forefront its exceptional workmanship into one of the most iconic skyscrapers in history.

The new One World Trade Center tower traces its design from the vestige of the original twin towers.

It still presents a traditional and simple form consisting of steel and glass curtain wall construction.

Nevertheless, the designers of the new tower managed to tweak the final design into something extraordinary.

It has a chamfered cubic base and topped with eight tall triangles forming an elongated square antiprism.

An interesting feature is that the tower forms a perfect octagon around the middle part.

The sculpted mast design along with the broadcasting antenna on top was a collaboration of SOM, renowned artists and engineers.

It follows that architectural model makers in New York City made sure exact specifications are met to achieve these.

The tower office model is presented with amassing of adjacent structures and roads to accomplish full visualization of the site. 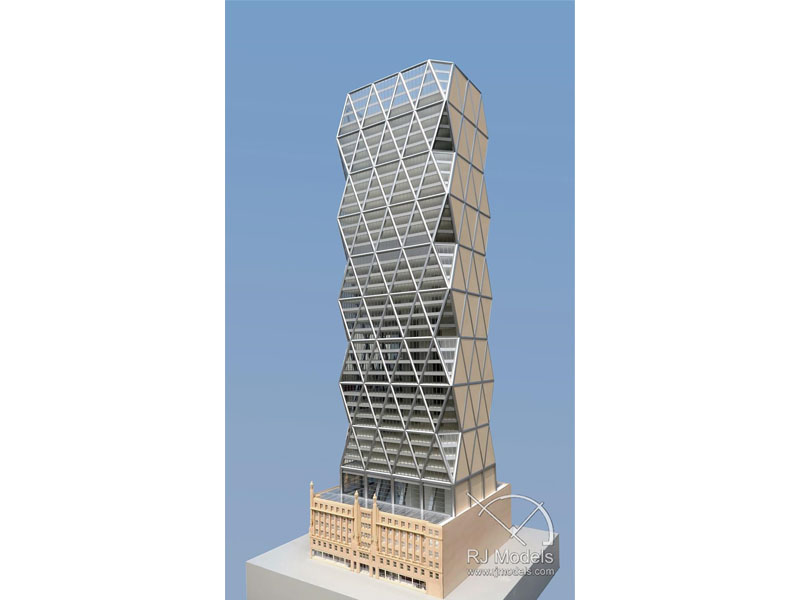 Located in Midtown Manhattan, the Hearst Tower is the headquarters of the world’s biggest print media conglomerate.

RJ Models produced this sublime mix of classic and modern tower building model within a span of four weeks.

A six-story podium building characteristic of the circa 1920s was masterfully scaled-down showcasing the cast stone façade.

It comes fully detailed with its major elements like the sculptures, carvings, and pillars of the original design.

The classically styled building served as the base for the tower. 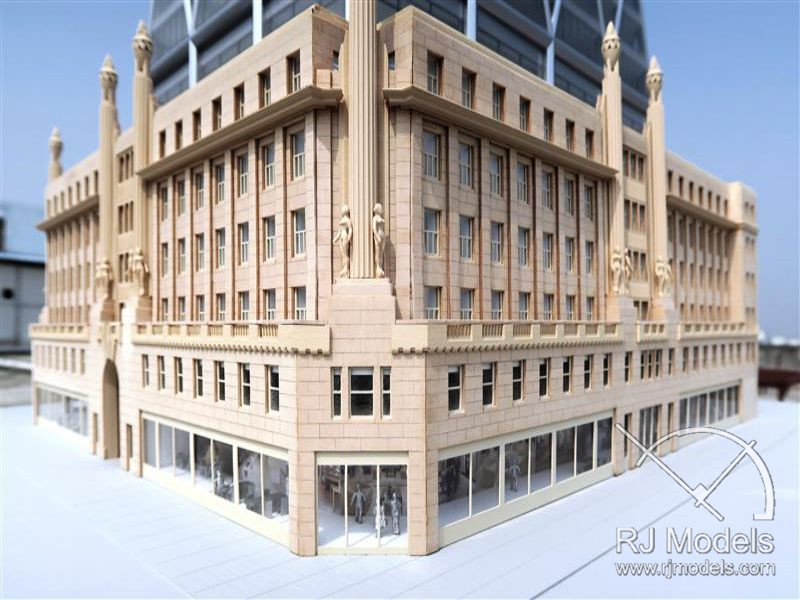 He provided the city, as well as the people who will work in it a timeless landmark office building.

Architectural model makers in New York City fabricated this geometrical structure precisely as it was conceived to be.

The commercial building features a tapered steel frame which is topped by three walls designed to light the city skyline.

Providing exemplary model has been our trademark ever since, hence making top firms like Foster + Partners choose us. 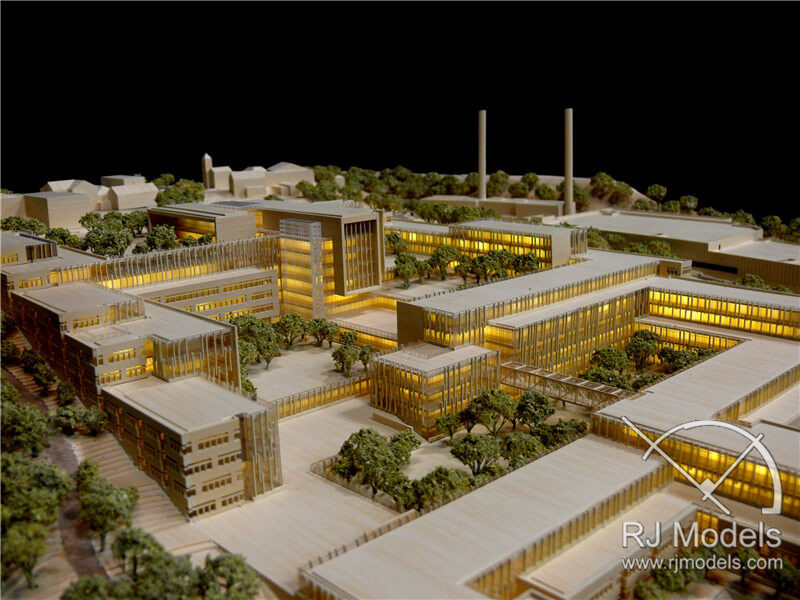 None other than a US government institution entrusted our model making company in New York to make their site model.

The Douglas A. Munro Coast Guard headquarters situated in Washington, D.C.  is really something RJ Models is proud of.

It will house various governmental offices in the country providing coast guard administration and services. 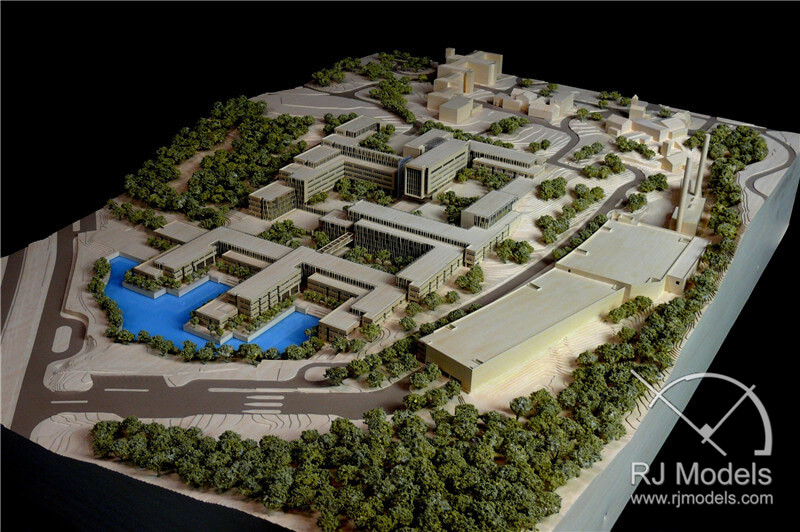 Composed of several multi-story buildings with identical design features creating a uniform look all around the building complex.

Detailed with randomly spaced vertical louver-like accents on each elevation that are highlighted with the incorporation of the lighting system.

The model not only shows the design accuracy, but it also presents the facility in relation to its neighboring structures.

Our team of model makers in New York City emphasized the topography of the site. 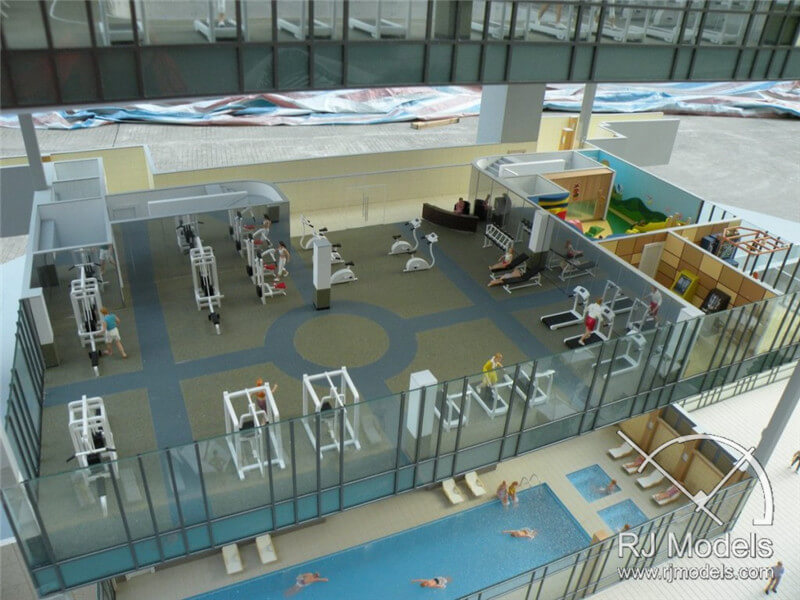 The model displays the recreational and commercial facilities for the locals of Ridge Hill in Yonkers, New York.

The Ridge Hill Club caters for a variety of play and well-being activities for children and adults alike. 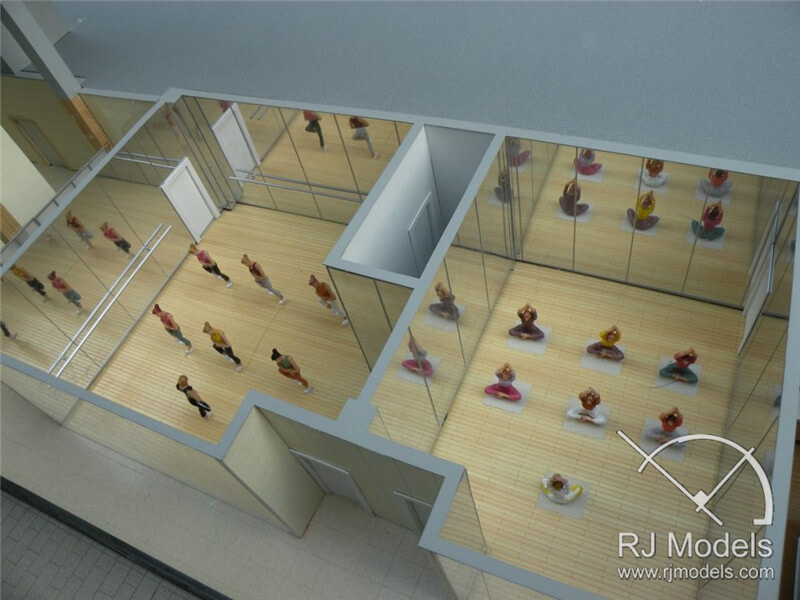 A fitness gym, yoga, and an indoor sports area, as well as bars and restaurants, are available.

You can define the spatial relationships between areas of the interior scale model . 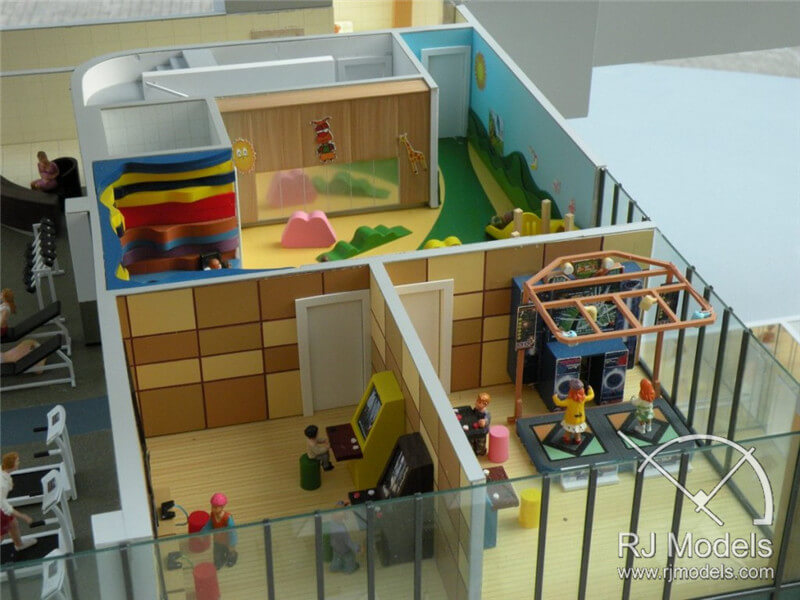 The model-making company in New York used CNC printing to form the equipment and apparatus inside the building model.

One can see how intricately detailed every item in a given section of the model.

Our model makers made sure one look can clearly define what each space is all about. 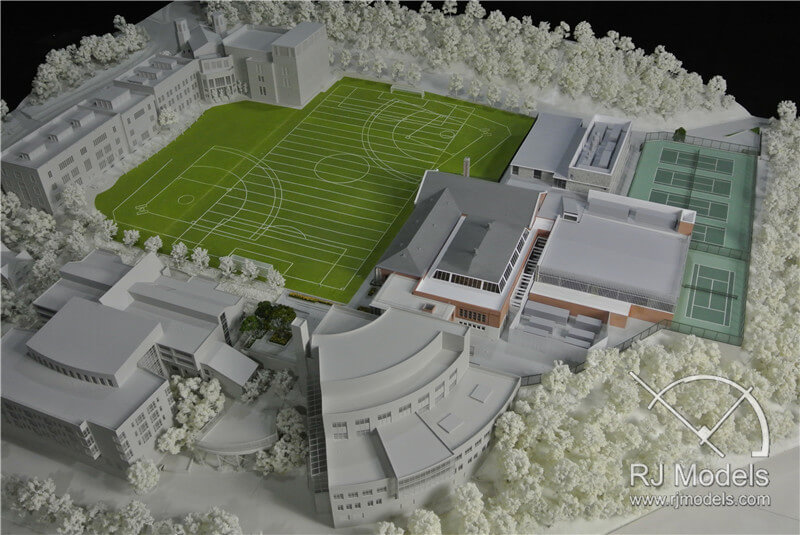 This premier institution caters to students from nursery to twelfth grade, thereby offering complete facilities for every learning level. 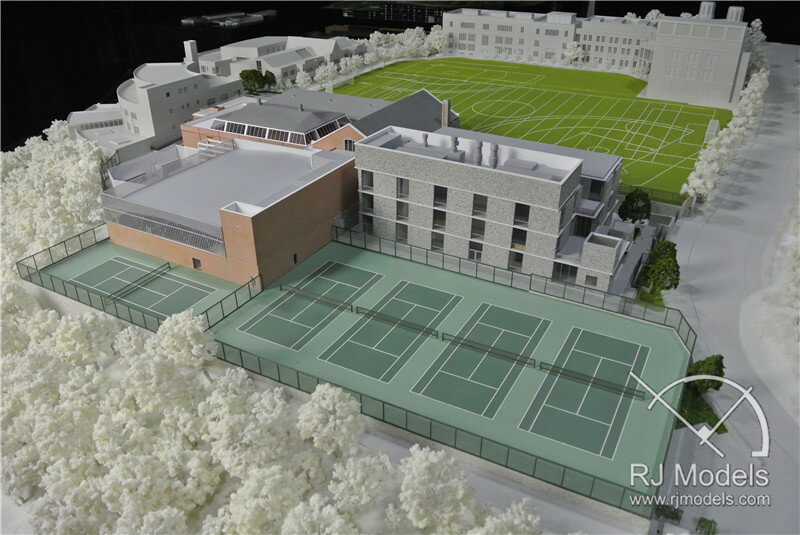 It features the entire site development of the educational facility.

We chose the white styled model trees to surround the various school buildings which present the characteristic form of each. 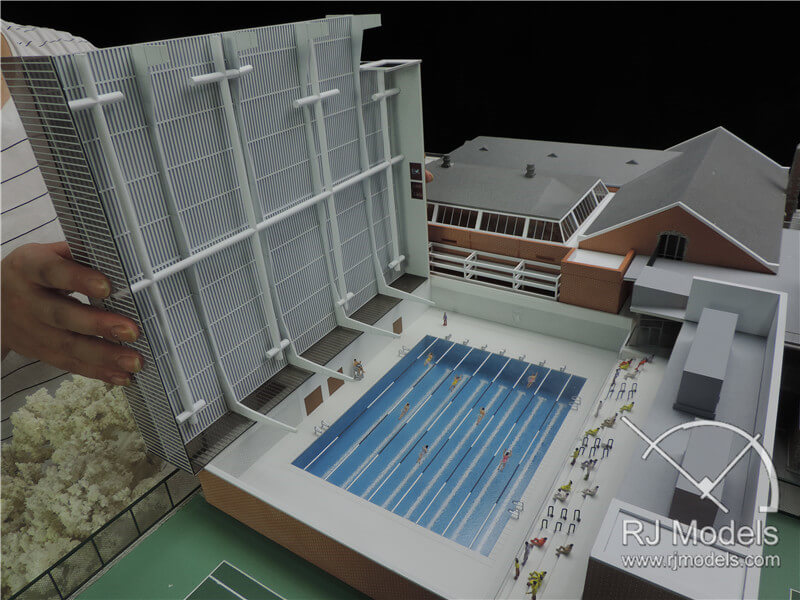 Accordingly, all these components create an effective visualization of every building’s relation to its surroundings as a whole. 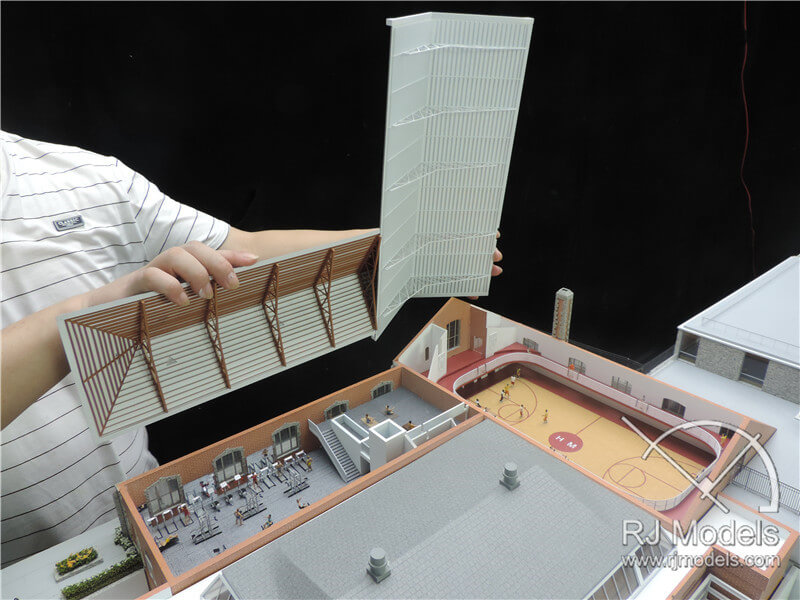 Our architectural and engineering model makers in New York City highlighted the model with a special LED lighting program and delivered in just a month.

Interestingly, we made the top of the building models detachable to see the interior space. 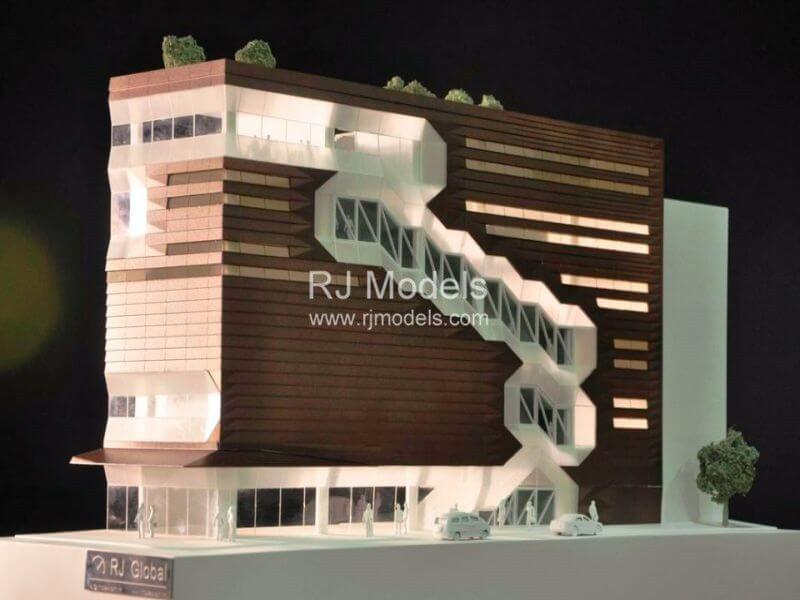 This multipurpose facility of this new school in Manhattan will provide space for a university campus.

Our architectural model makers for NYC features this building with a detailed 1:100 architectural scale model with a removable facade to showcase the interiors. 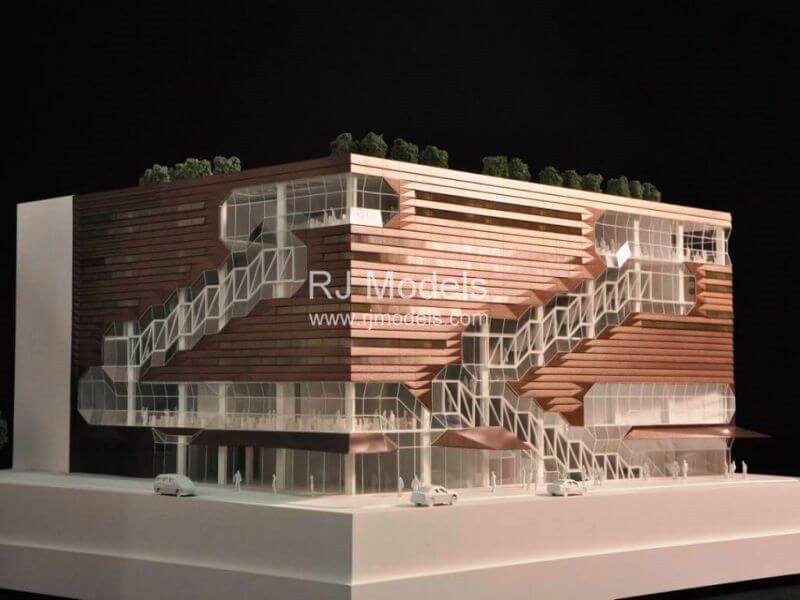 RJ Models used a stacked material method to build up the facade, creating an overall detailed and layered texture.

The unique design of the stairs also brings a distinguishing factor and was also a challenge for the models in creating them.

In between these spaces, 50,000 sq.ft. , our model makers built a worth of space, classrooms, labs, and studios. 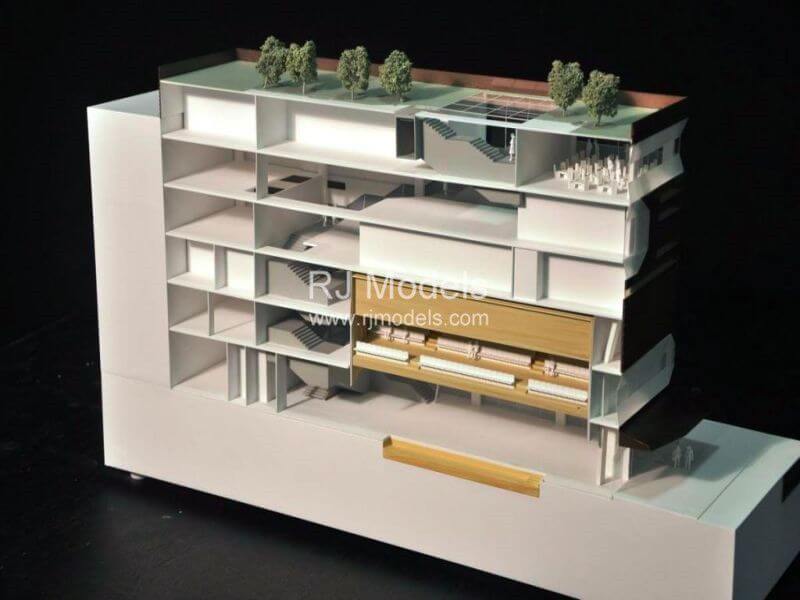 The facility is home to an immense academic program with 19 fashion studios, 12 classrooms, 17 drawing rooms, and seven science laboratories. 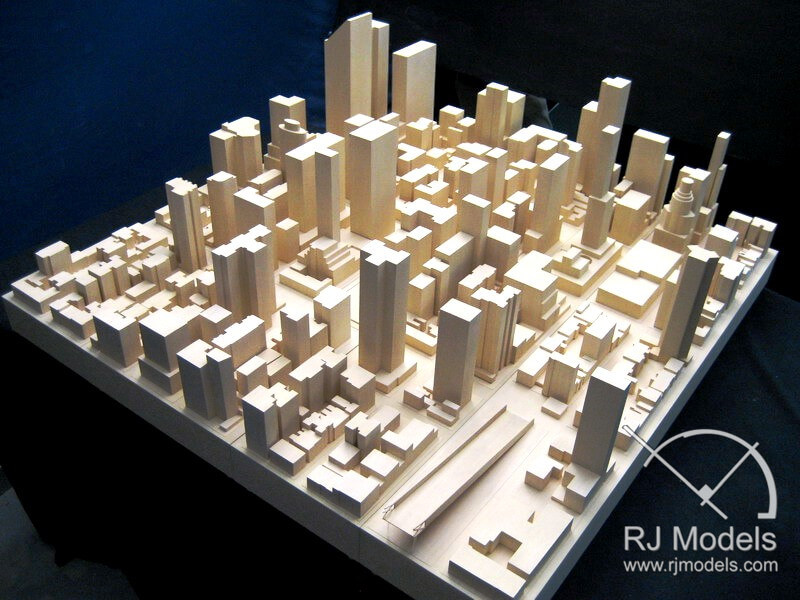 One of the most accomplished architectural and engineering companies in the world have us as their choice model making company.

For this project, our architectural model makers in New York masterfully used basswood as the medium for the model.

Basswood has a fine grain characteristic, sturdy and resists corrosion.

Our model makers laser cut the material to precision by the exact millimeter and finished in less than two weeks.

These types of wooden models are often used for design consultations and planning how the layout will turn out.

Hence, we ommited the usual architectural entourage like foliage or cars.

Having done so supports any viewer to better envision the organization, massing, as well as the layout in general. 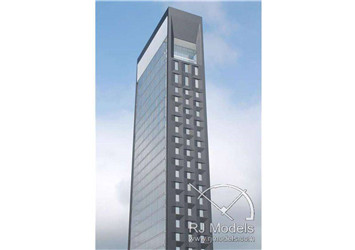 Baccarat is a luxury crystal brand founded more than 250 years ago by French King Louis XV.

It goes to say that the concept of the hotel embodies the exquisite elegance of their product into the architecture.

And it was impressively achieved by long-established architectural model making company for New York City by RJ Models.

SOM designed this contemporary style building to accommodate a library, hotel, condominiums, as well as various amenities for guests.

This 50-story structure has a podium facade that glows like a chandelier when lighted especially at night.

The tower features matte black panels on two opposite elevations, while the other two have crystal clear glass claddings.

An architectural scale model can be as simple as a white style, monochromatic type or a rich, full detail one.

No matter how easy or tedious a project demands, RJ Models always delivers 101% effort into the model making and architectural rendering service.

Over 20 years of industry experience made us into where we stand today, on top of the game.

New York City, with its gems of architectural icons, never failed to realize what our model making company offers.

We take pride in our commitment to provide top architectural design companies with professional model making in the most competitive rates.

Regardless of the model’s size or specifications, clients are assured of fast turnaround time for every project.

Guaranteeing that only the highest quality product models come out of our worldwide installations.

Our clients are not only private and government institutions, also are the biggest names in design and construction.