Massing is a term used in architecture that refers to the perception of the general shape and form as well as the size of a building.

The massing model represents those models that focus on the massing of architecture, rather than its structural detail, building material, color, layout, or facade.

Because their first selection for massing models, which can minimize unnecessary distractions.

Massing influences the sense of space that the building encloses, and helps to define both the interior space and the exterior shape of the building.

As a result, in the massing models, apart from the buildings themselves, their surrounding environment, landscapes, roads, even terrains are often been represented to show the entire scene.

1. Massing model for Jakarta by SOM 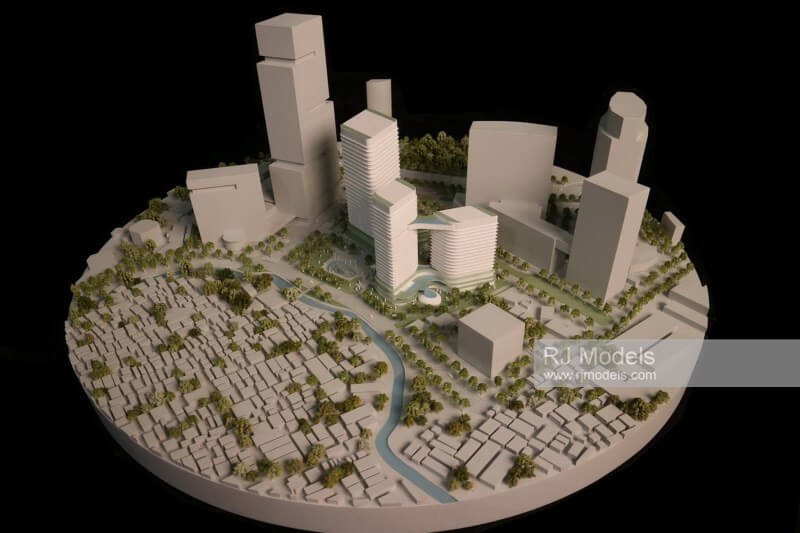 This is a transit-oriented development master plan for the capital of Indonesia, Jakarta, by the world-renowned architectural design company, SOM.

RJ Models produces the massing model of the site for SOM.

We used white PVC panels to make the base and architectures, and added some light green model trees along the roads for decoration. 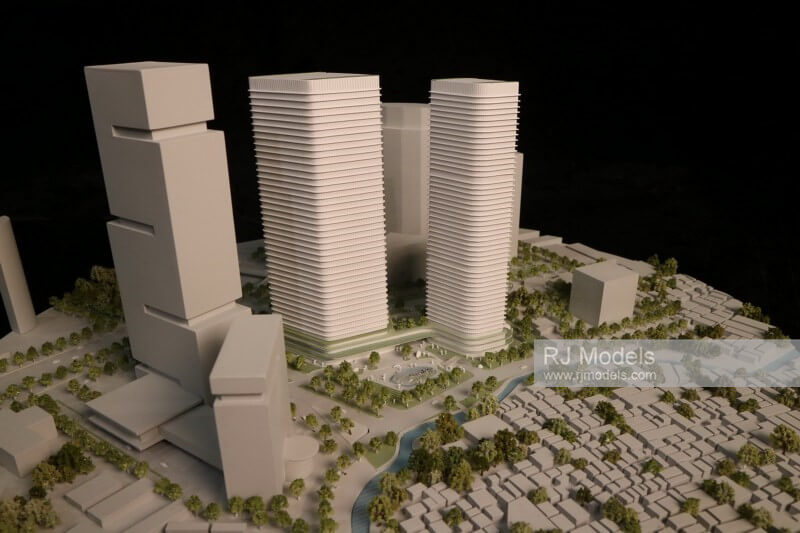 In order to represent the real scene effectively, our model making experts from RJ Models use a CNC carving machine for the window frame part on the facade of the diamond-shaped buildings and use a 3D printer to make the massing of the arc-shaped building.

The entire massing model is placed on a circular base with a diameter of 1.8 meters.

And adopted Morandi colors for the decoration parts, like river and landscapes, which endow the entire massing model a very harmonious feeling. 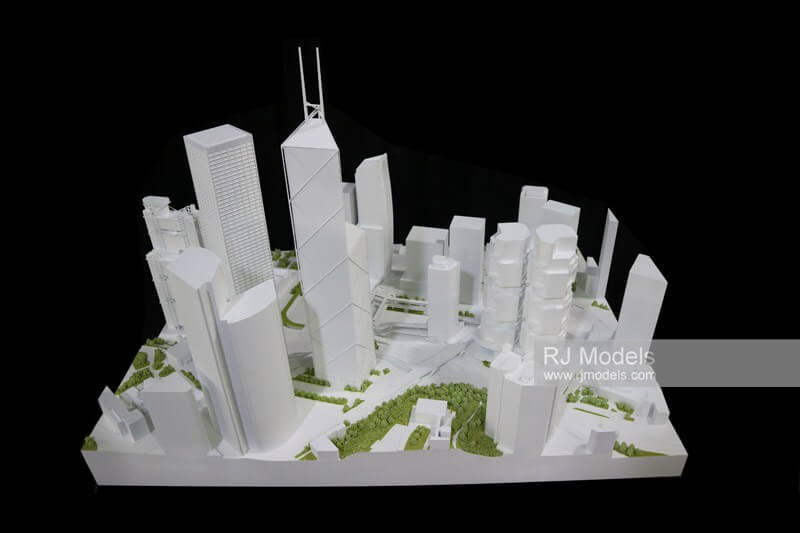 This massing model is designed for Murray Road in Hong Kong, which is considered a boundary between Admiralty and Central.

Our architectural model makers complete this 1:500 massing model in a short 3 weeks’ time without any neglect of quality.

In this model, you can see many well-known buildings in the area, including the Bank of China headquarters designed by Ieoh Ming Pei, and the Murry Building renovated by Forster + Partners. 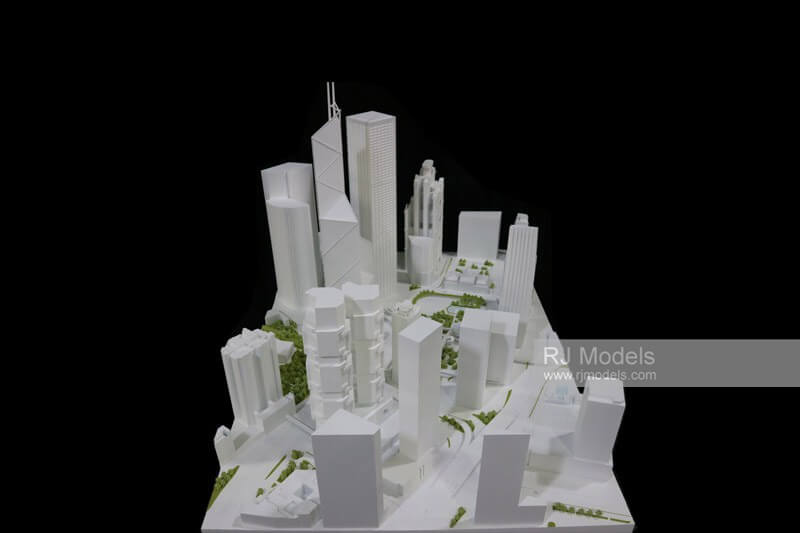 The terrain of this area is pre-entered into the electronic system by our model makers, and is perfectly engraved with 3D printing without any subsequent polishing.

Our architectural model experts use the simplest and clearest way to present each building massing, such as adding rhombic patterns on the massing of the Bank of China headquarters to simulate its actual diamond-shaped glass facade. 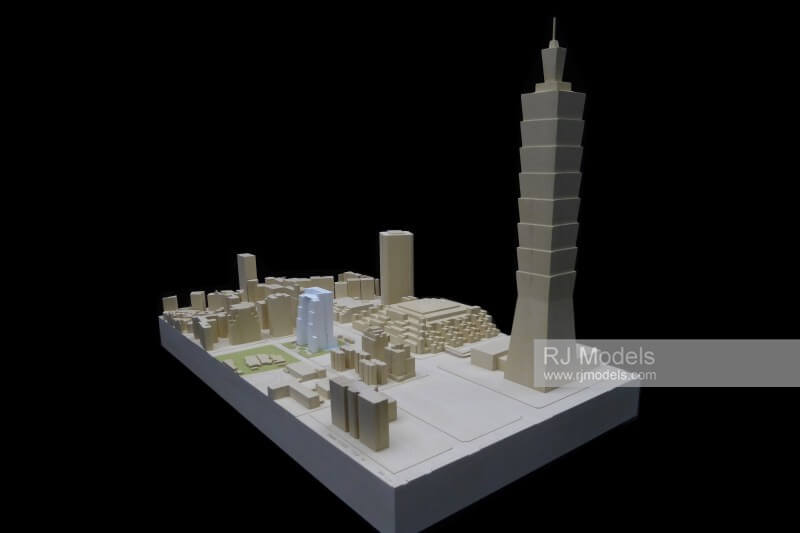 This massing model represents the Taipei 101 Tower and its surrounding area.

Our architectural model builders choose timber plates and blocks to produce the buildings in the model, and even the base is also a thick plank with the same material.

The iconic Taipei 101 building’s façade, which extends like a bamboo, has been restored, except that, other buildings are produced by simple cuboid blocks without any decoration. 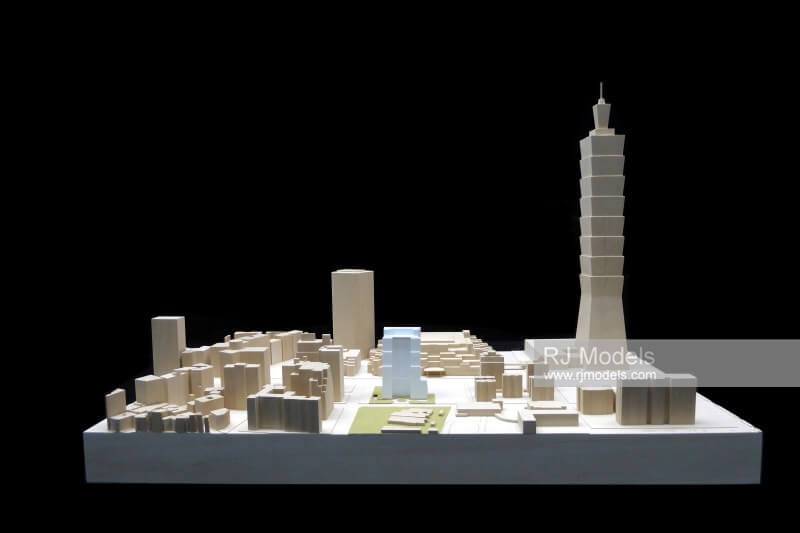 The eye-catching part of this model is the detachable building in the most central position.

Model experts not only strengthen it with white PVC material, but also make two different green landscapes for it to be displayed alternately.

In front of the central building, the architectural model builders also added some green plant pavement to better display the core area to meet customer needs. 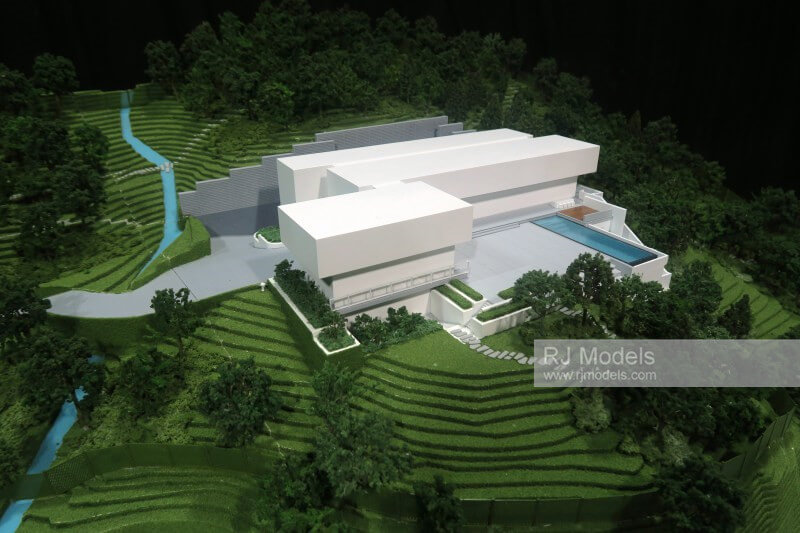 “Shek O” in Cantonese literally means the “rocky bay” which is a peninsula on the southern coast of Hong Kong Island, facing the South China Sea, and surrounded by Shek O Country Park, Big Wave Bay, and Cape D’Aguilar.

Because of its excellent location and an unbeatable view, tremendous villas have been built by world-renowned design companies.

With many times of successful cooperation experiences, RJ Models’ client Forster + Partners commission this villa massing model to us. 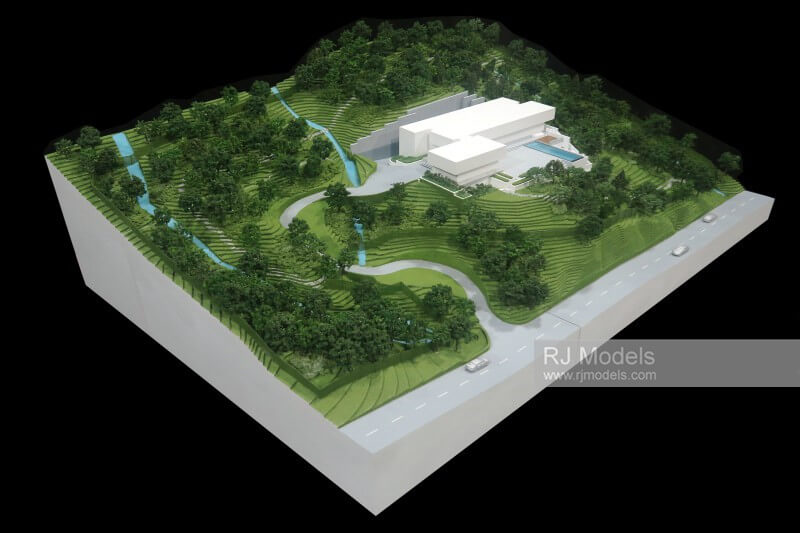 This villa is a completely modern style, therefore our model experts use straight cutting edges blocks for its main body and dramatic swimming pool in the front.

On its surrounding mountains, which are covered with plants and grass, curves such as contour lines in geography are used to express changes in terrain. 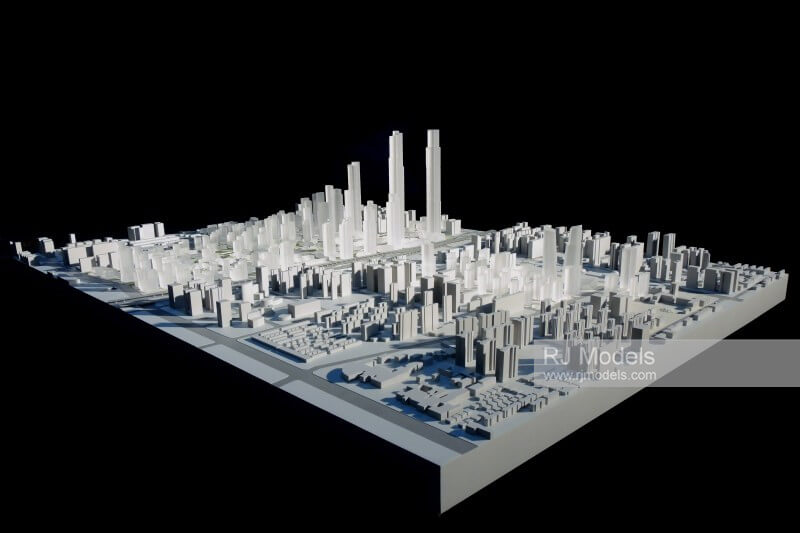 This massing model of the master plan commissioned by KPF Architects is a concentrated display of the unique aesthetics of RJ Models in the model making industry.

Model experts from RJ Models use gray and translucent materials throughout the model making process. 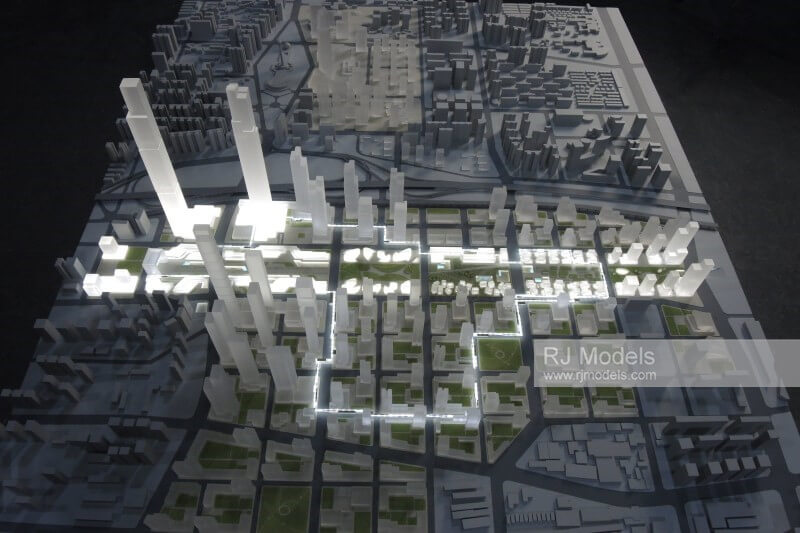 The buildings in gray are displayed only with geometric shapes, without adding too many details, while the core buildings expressed with translucent materials have the depiction of the facade, not just showing their massing.

In addition, the model makers also install a circle of white led light strips in the central area to increase the sense of significance; the lights come through the translucent material also add the dramatic feeling.

6. Massing Model for Nanjing in China 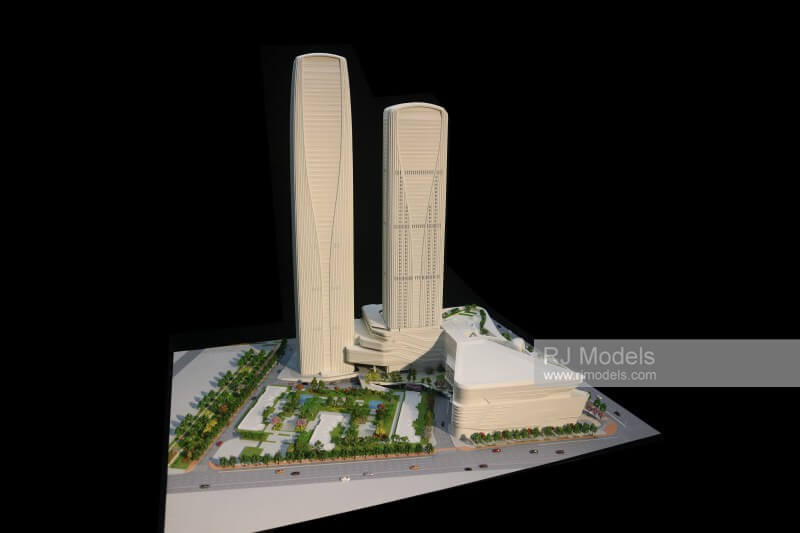 The Shimao G11 project, designed by Woods Bagot, RBS, and Forster, is another new landmark in Nanjing.

The project includes two high-rise buildings used as offices and a podium used as a commercial center.

Because there are abundant curves in the podium part, model makers combine 3D printing and laser cutting technology to ensure that the model and the drawing are indistinguishable. 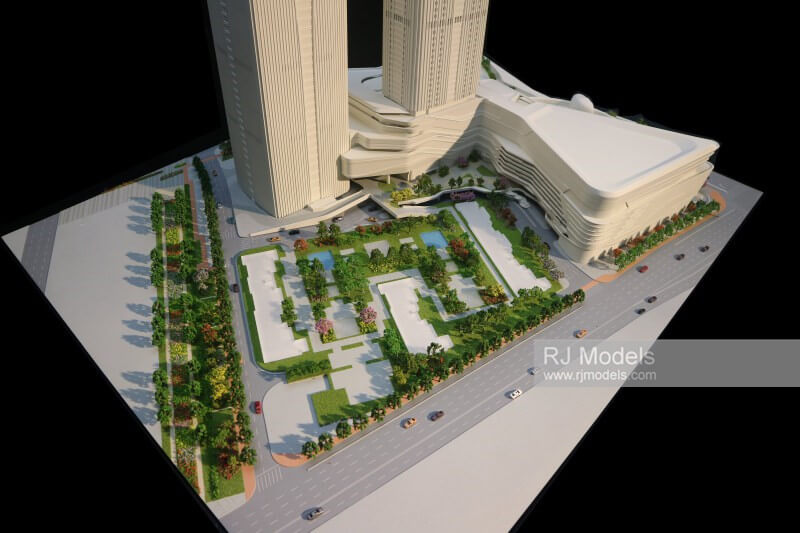 In addition, because the main model material is timber, which is rigid and easy to break, the performance of the façade structure of the office buildings at a ratio of 1:20 poses challenges to the model makers. 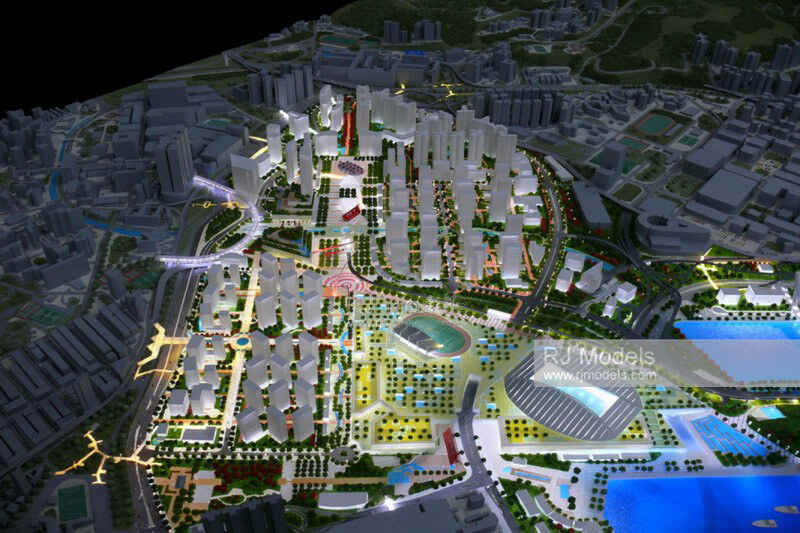 Although the scale of this model has reached 1: 2000, the entire model still occupies an area of nearly 10 square meters.

In the massing model, we can see that the stone wharf originally built with granite is not only a wharf.

Our model makers use numerous tan blocks to represent the societies around Kai Tak., while the Kai Tak area is mainly presented by translucent and brown acrylic, forming a sharp contrast.

The model experts also install a gorgeous lighting system for the massing model, using white light strips to curve the coastline and docks, and warm yellow lights to express the road system.

Massing is one of the most important architectural design considerations because it creates the most impact on the eye and has a direct relation to the impact a building makes.

The architect’s design of a building usually begins with a preliminary estimate of the architecture massing in the site, and uses massing models to have a direct feeling of the buildings.

Our architectural model making team has accumulated abundant experiences in making massing models over the past twenty years, and each of our fine details shows our differences to other model makers.