Skip to content
Home > Tsukiji Memorial Miniature Exhibition – Re-creating the Sights of Tsukiji with a Series of Models Created by RJ Models.

If you were a lover of fine cuisine, you probably would have heard of the Tsukiji Market.

Lonely Planet, a prominent and well-known travel guide had this comment on Tsukiji Market:

“No place in this world is noisier and messier, but at the same time everything about this place is methodological.”

The move also brought vibrancy and liveliness of the former fish market to the Tsukiji we know today. 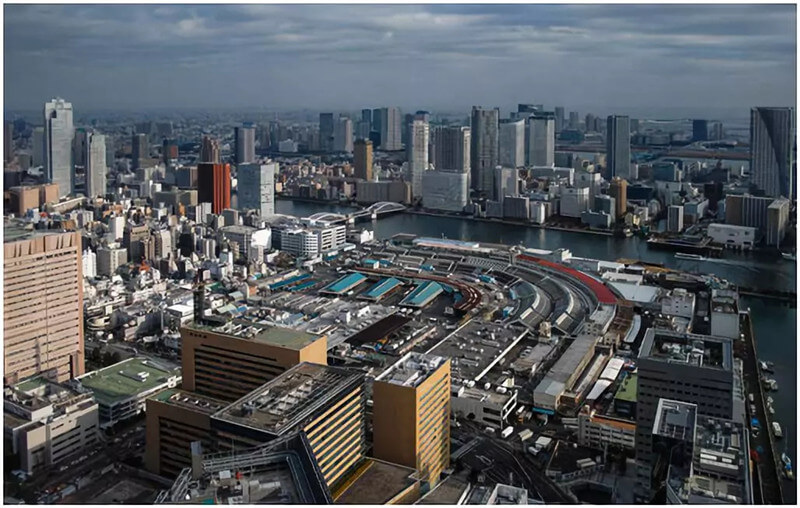 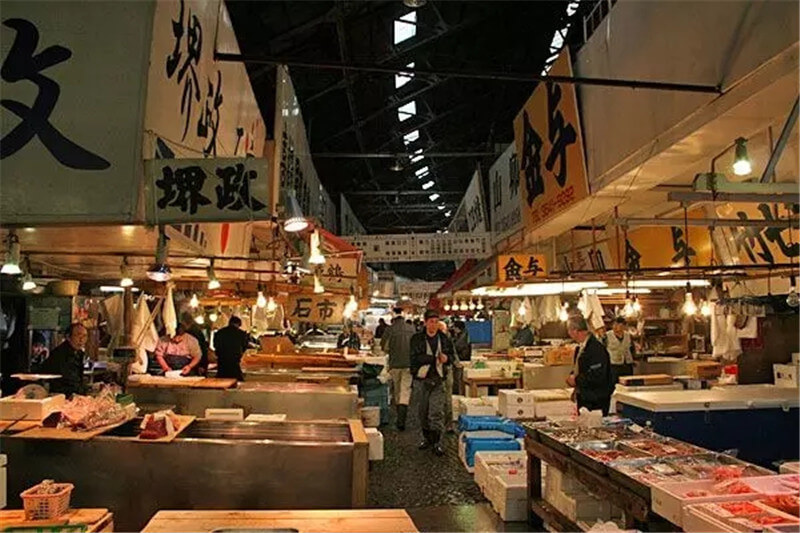 Tsukiji was the place that promoted Japan’s seafood culinary culture cultivated over several hundred years.
It was also the world’s largest and most symbolic fish market.

However, no place in this world would remain unchanged. Tsukiji Market entered history on the 6 October 2018, when it relocated to its new premises.

Since the announcement of the relocation, the public started using different ways to bid their farewell. 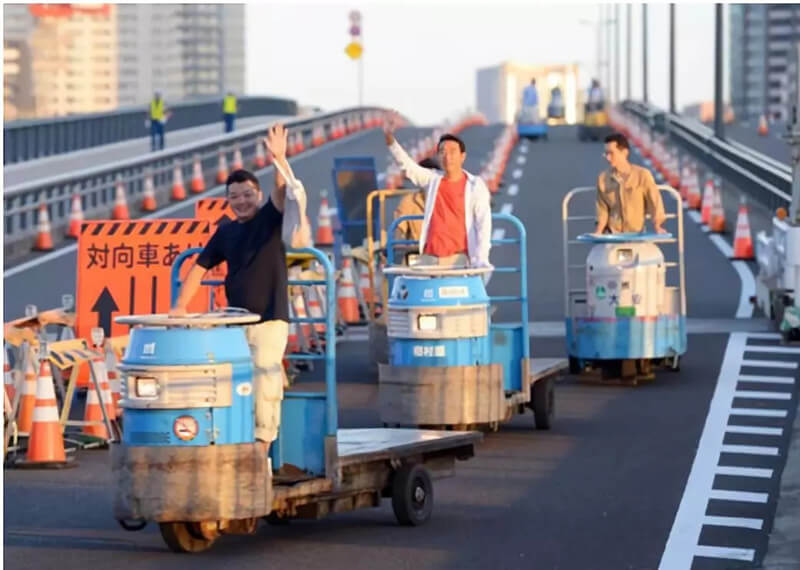 The series of models to some extent was different to RJ Models previous works. Tsukiji model series was like looking at a single still frame of the negative of a motion picture. 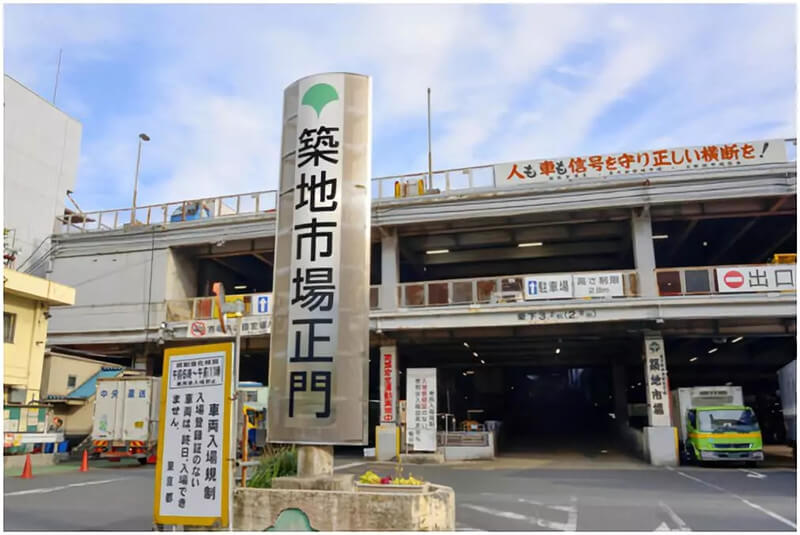 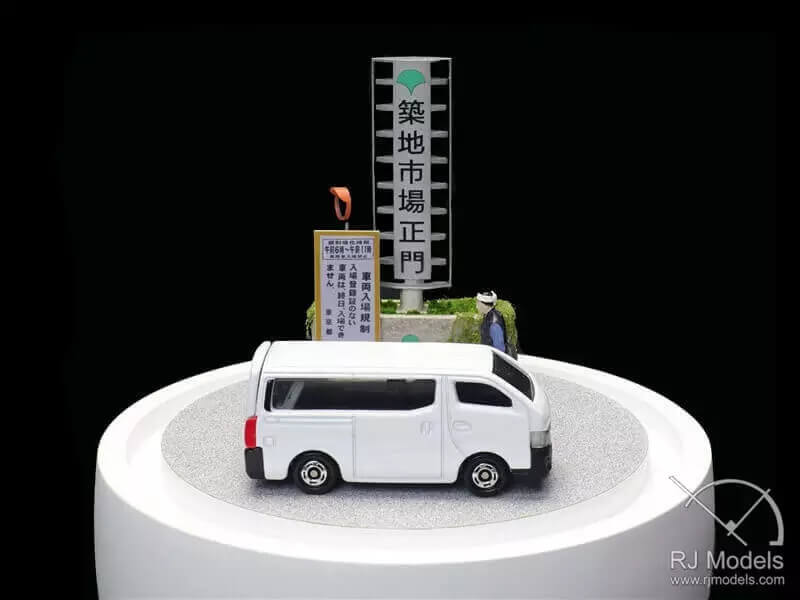 Tsukiji Market occupied an area as big as 68 football fields with an approximate of 42,000 people going in and out each day, hence it was essential to include details such as the road mirror to reflect this scene. 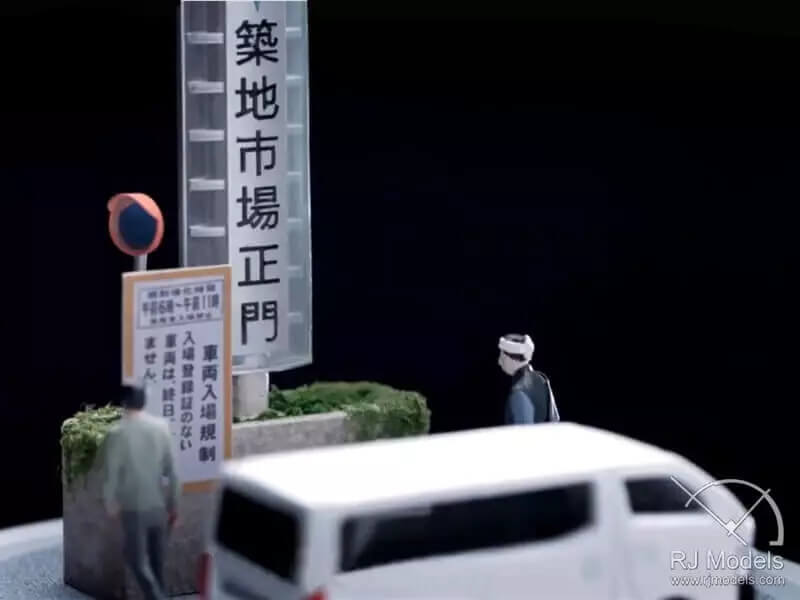 The signboard clearly stated that the market prohibited entry to any vehicles not associated with the market to ensure the regular order of the interior.

A minivan for transporting the seafood parked close to the “Tsukiji Market Main Entrance” signage and the public noticeboard.

A fish trader with a white towel tied around his head, transporting a load of seafood purchased for his shop to ensure a fresh supply of aquatic products to its customers.

The architectural model maker constructed a few of the most typical scenes of Tsukiji Market Main Entrance on his model.

Every morning at 3 am, the coffee fragrance filled the air. Senri-Ken and Aiyo cafes were Tsukiji merchants’ favorite hunt for a break and to replenish their energy.

The interior of the cafes was plain and unadorned even the traditional looking bar counter looked antiquated. 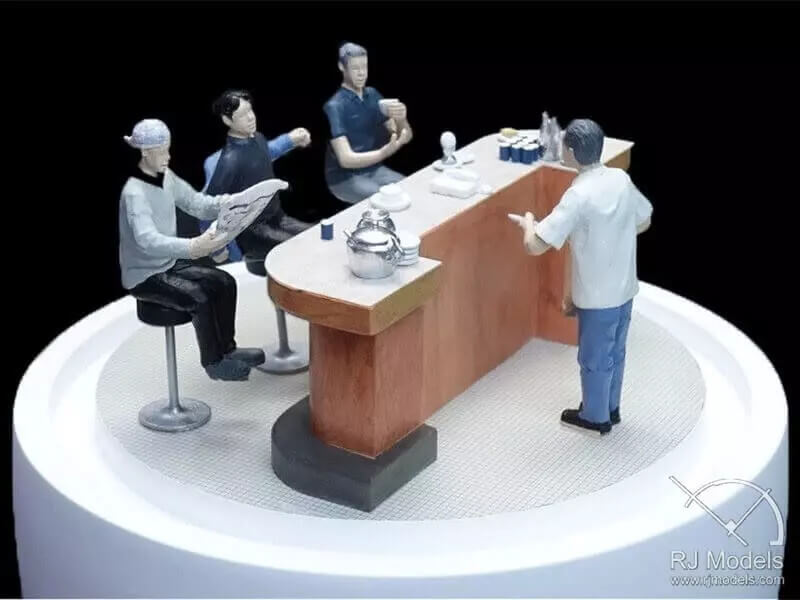 After the first round of hard work in the early morning, the fisher dealers would enter the cafe, take their coats off and ordered a breakfast combination of toast with butter and jam.

The boiled egg that sat elegantly in its egg cup brought back the nostalgia flavor and way of eating.

The customer enjoyed hand-brewed coffee while reading the newspaper. Customers well acquainted with the cafe owner exchanged greetings and caught up on their daily lives. The cafe was the place where customers were able to pour out their grievances and to find warmth and comfort among each other.

The model brought out the early morning scene that showed the daily lifestyle of the customers and shop’s assistant of this cafe that had been passed down three generations and still full of Japanese Showa style. 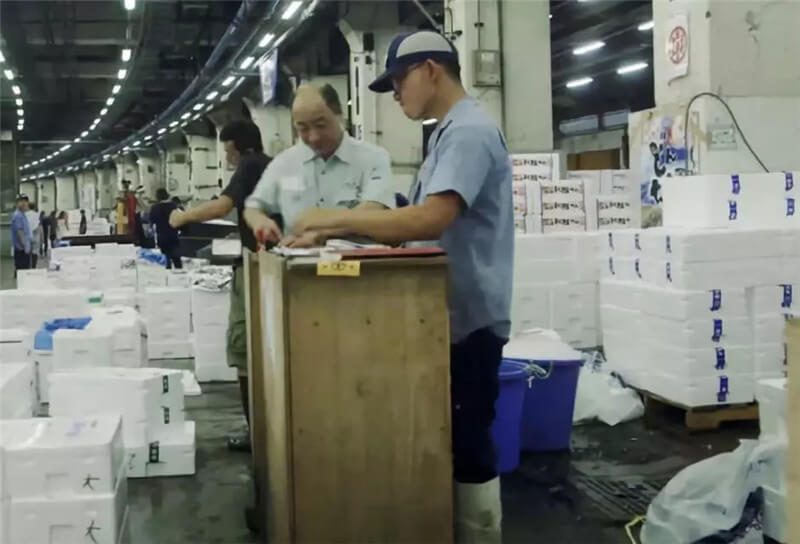 The fish market has a trading history of 350 years. Today, the wholesale distributor representative Mr. Yamazaki arranged the produce according to the purchaser requirements, into different sizes, different types of fish and weight after the fish merchants separated and packaged them. 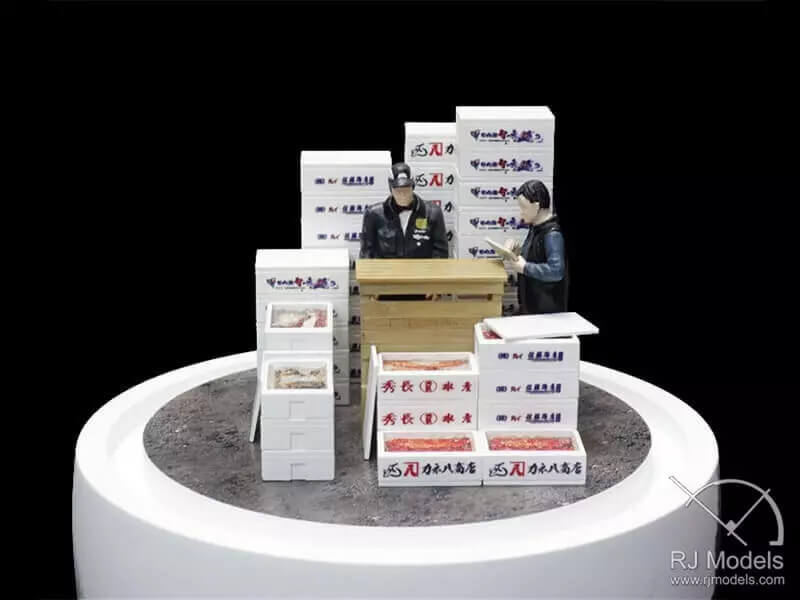 The wholesale distributor stood by the side of a table, surrounded by stacks of boxes up to 2 meters high and styrofoam boxes filled with the various types of seafood. The boxes were all labeled. A buyer would note down the label to place an order to the distributor. 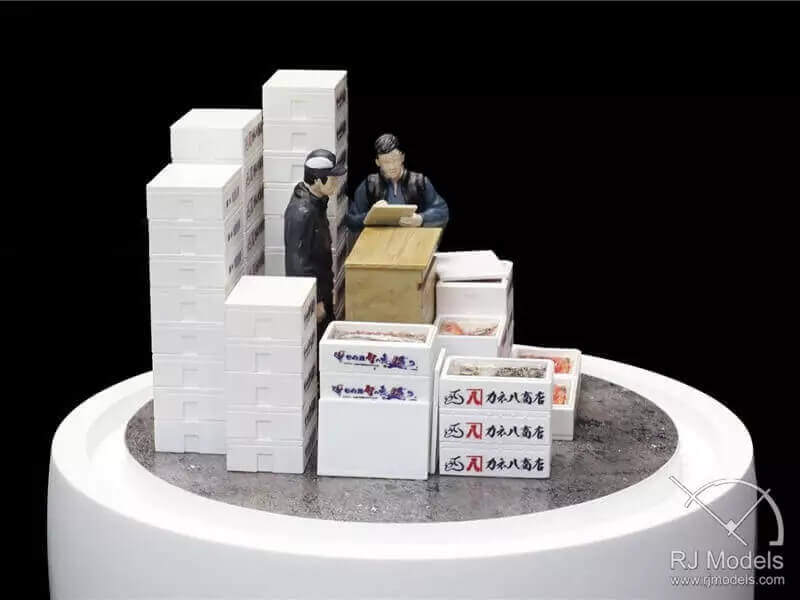 Model 4 of the Model Series, Shop Front of Yamaharu 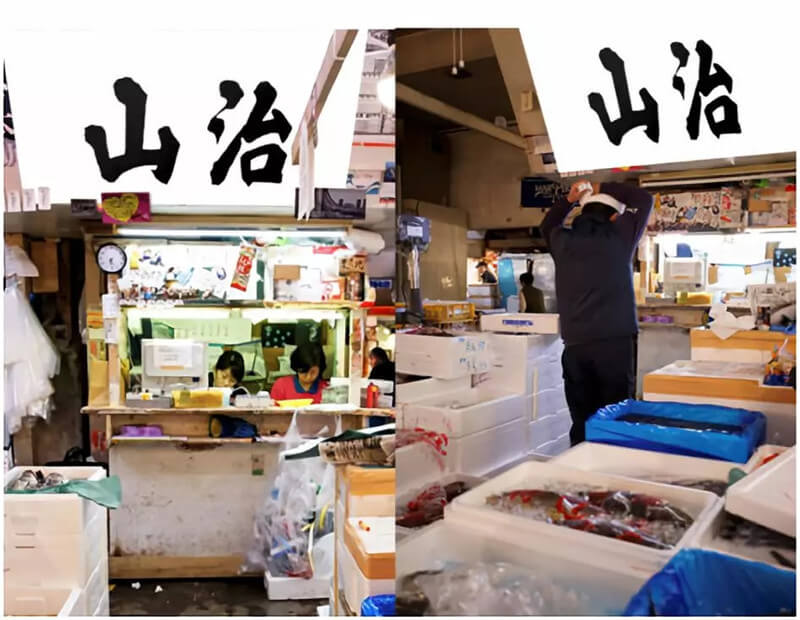 Tsukiji Market was the world’s largest fish market with approximately 750 fish trader, 1260 fish store. Yamaharu Co. Ltd is one of the largest and leading wholesale distributors in Tsukiji. Other than supplying to Sen-Ryo, Yamaharu also supplies to the five or six Michelin restaurants in Japan deeming Yamaharu as the leader of the fish traders.

The display on the model was a scene of the daily routine of one of Yamaharu twenty or so storefront complete with calculator and telephone. Also on display was a clock and the numerous notices of regulations and announcements. 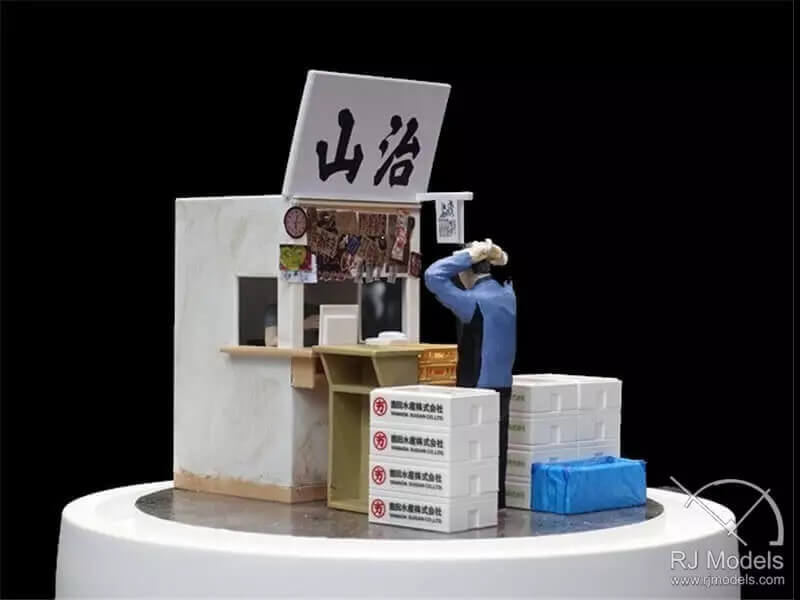 Mr. Yamasaki tied his headscarf enthusiastically, a reflection of his pride in his profession while displaying out the best quality seafood product. 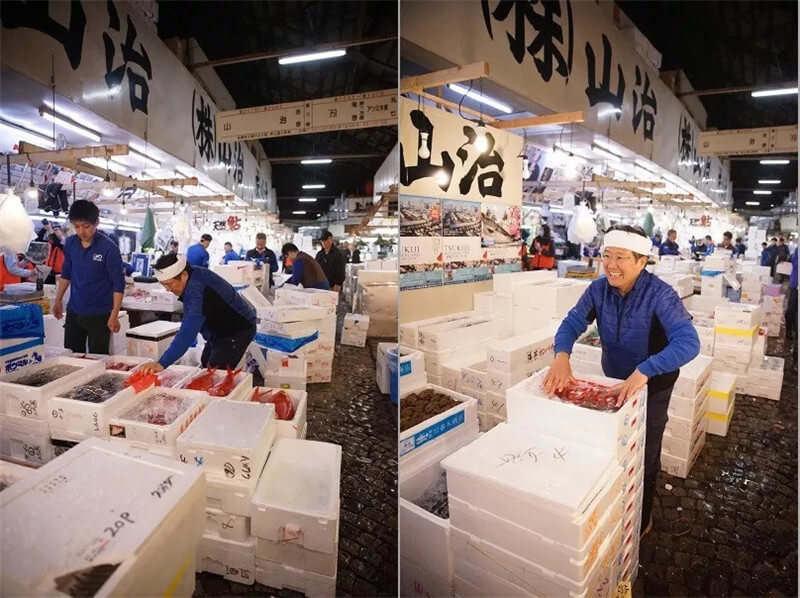 The model on display was the wholesale distributor representative, Mr. Yamasaki, standing in the middle of all the styrofoam boxes, taking stock of the seafood and arranging them.

Under the lightings from the light bulb that illuminates the Yamaharu signboard, the seafood in the styrofoam boxes appears healthier and with luster. The boxes labeled with fishing port information provided different choices to the numerous buyers. 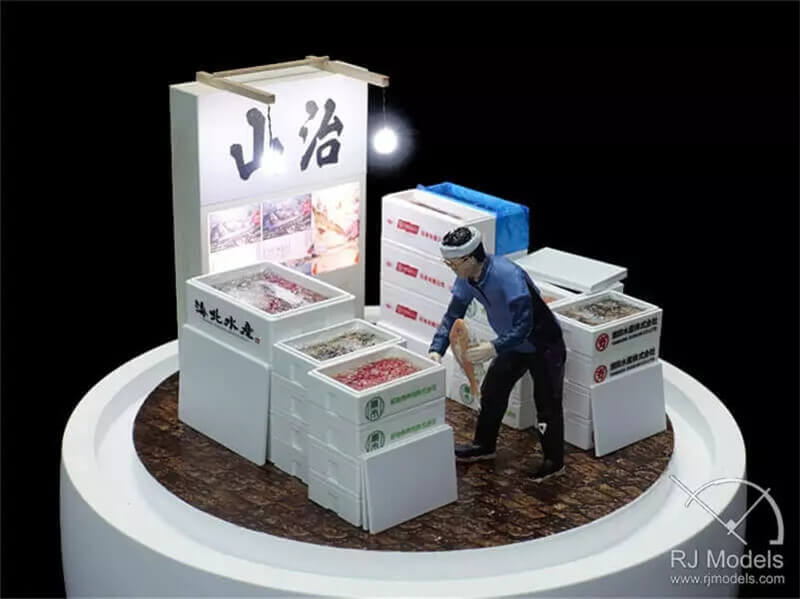 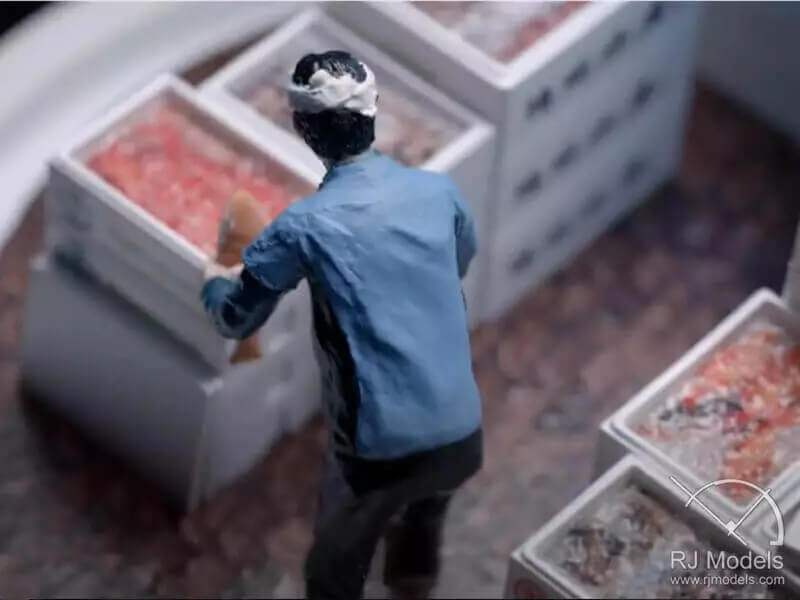 From the model display, one can see the wide variety of seafood on offer, including Hokkaido Horse mackerel, mackerel, snapper, shirmp and many more, all covered in iced water and ice to keep them fresh.

The market went through 3 centuries of bustling activities contributed not only by the Japanese love for seafood but also the sound reputation of the quality plus freshness of produce self-evident by the label “Supplied directly from Tsukiji.” 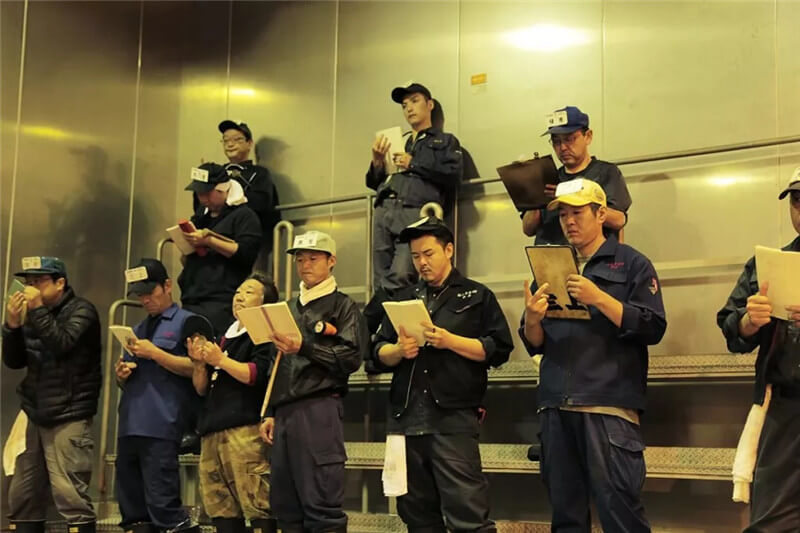 The auction site was a “war zone” of the professional buyers, with all sorts of seafood container labeled with its fishery port of origin. The buyers are serious and professional and able to judge the value of the fish stock by merely observing a section of it.

They consider the entire trading process as a ceremony and do not take it lightly. They often carry a pen and a notebook to record the quality of the fish stock.

5 am in the morning, and the market sounded a prelude to indicate the start of the auction.

The entire auction scene was a symphony of the seller’s high-sounding vocal and the buyers bidding hand signal. Some would even block the view of their hand signal with their notebook. The sea urchin would go to the highest bidder.

The entire auction process was more rhythmic and faster than expected and a deal often closed in a matter of seconds. 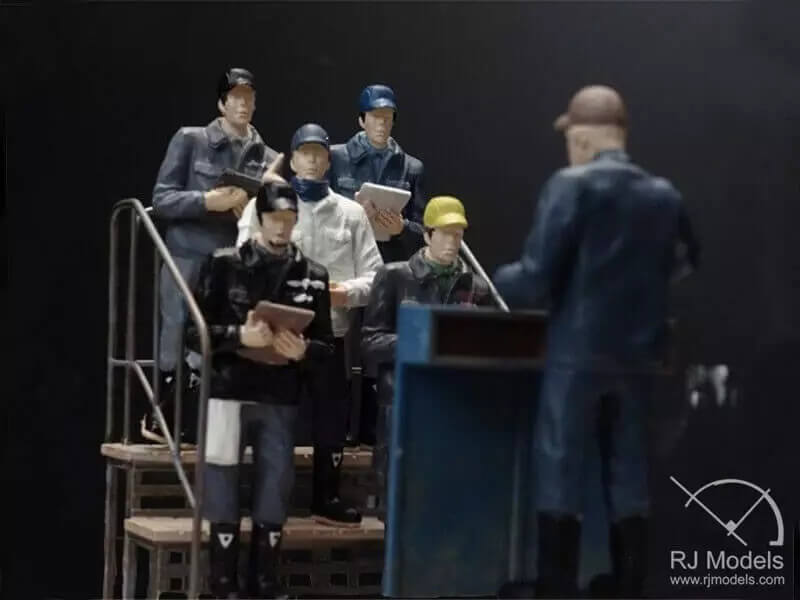 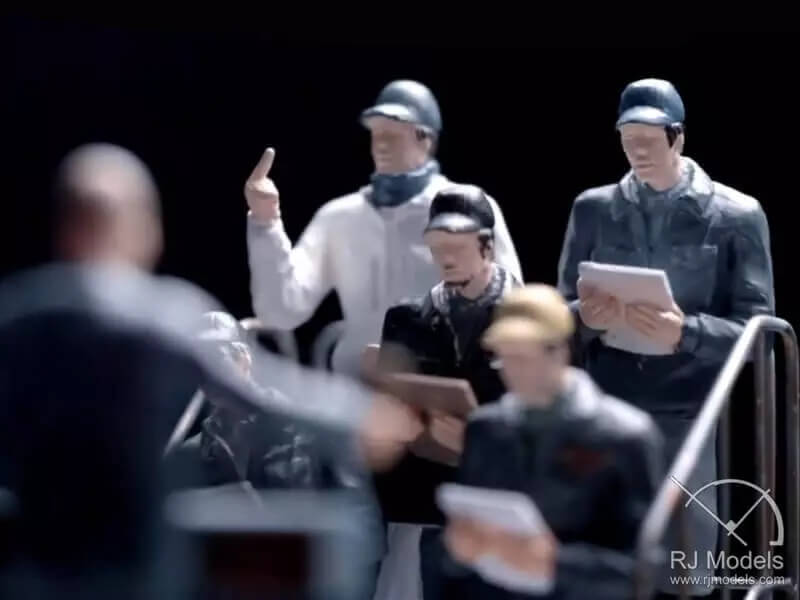 The outer market of Tsukiji market is a diner’s paradise.

With the freshest produce from the world’s largest fish market, the ingredient used by Sen-Ryo chef was naturally the best.

The model presented a scene where the sushi chef entirely focused on the task of making the sushi. It also displayed the customers sat at the sushi counter enjoying the food. On the sushi counter, were the cutleries and condiments neatly arranged and completed with the display of the season’s thick and succulent Alfonsino. 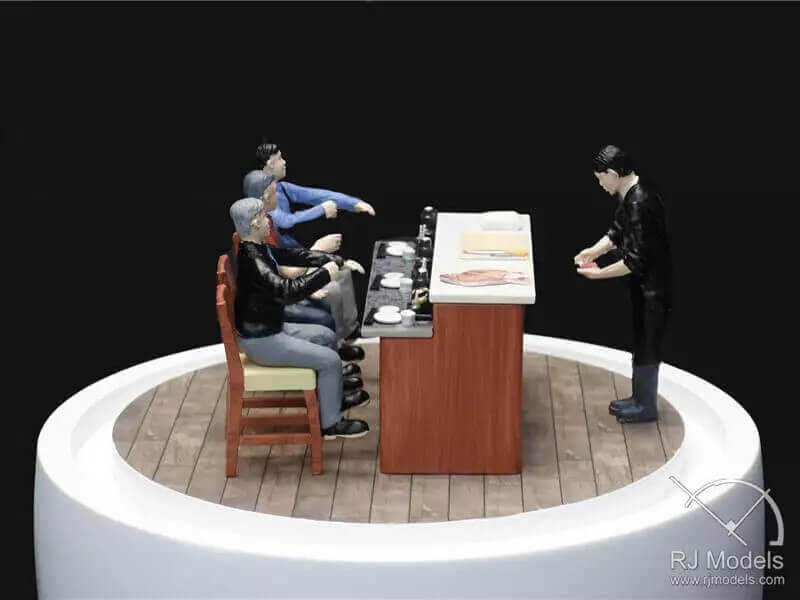 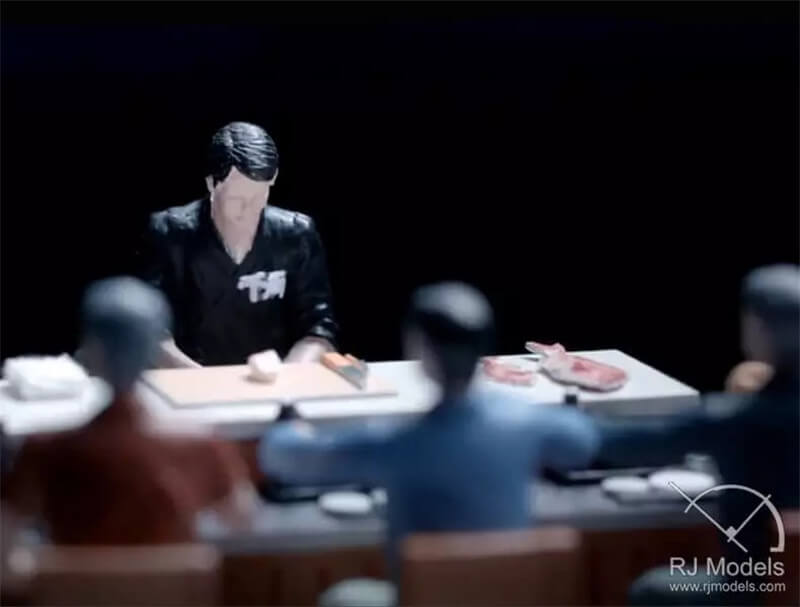 In Tsukiji Market, Tokyo people have this saying that they feel the changes of seasons through the food. For example, spring is the season for shellfish and the Torigai also known as Japanese cockle is most thick and succulent bringing us Torigai sushi. 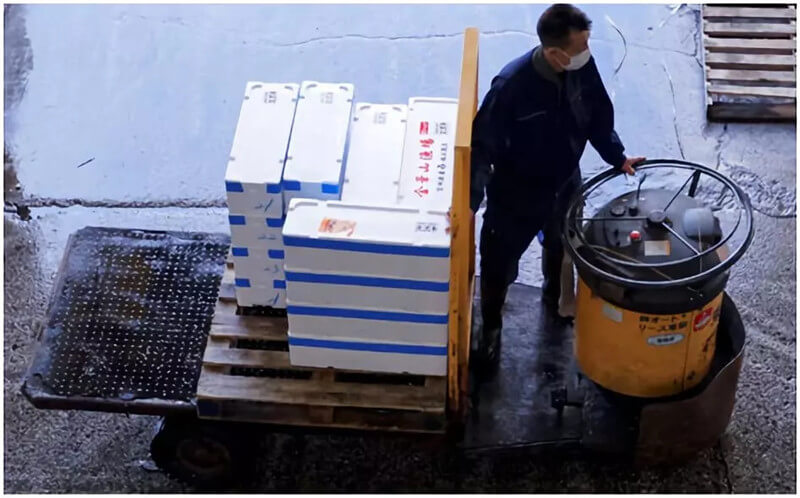 Tsukiji Market handled 1800 ton of seafood and 1160 ton of fruit and vegetable daily. The scale was five times more than the second largest fish market in the world, the New York Fulton Fish Market.

Traders started loading and unloading cartons of fully loaded seafood at the crack of dawn. The turret loaded with neatly arranged boxes of fish then arrived at the fish store for unloading. Such is the unique scene of Tsukiji. 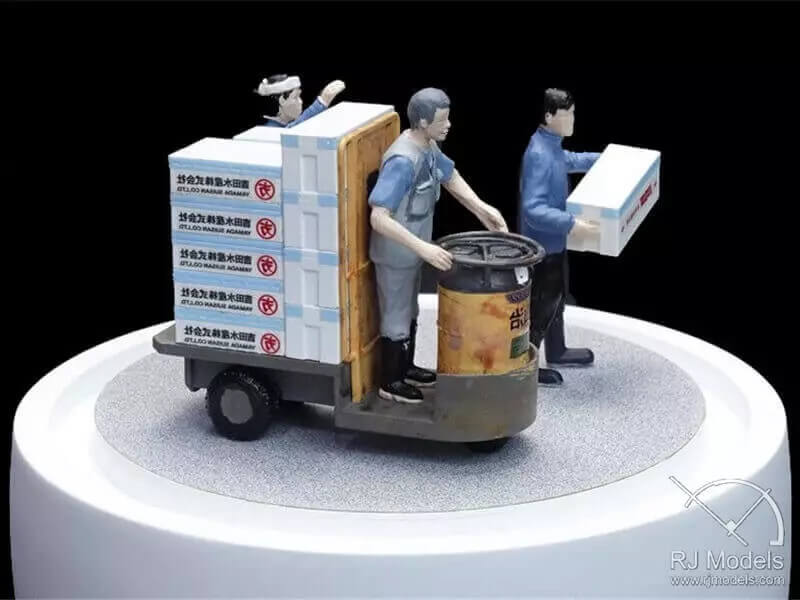 The model realistically displayed the daily scenario of a turret transporting cartons of seafood in its various sizes. Yamaharu employees unloaded the produce from the turret. Standing at the side of the turret with a clipboard and a hand movement of waving goodbye was Mr. Yamasaki, a gesture that symbolized the end of its 83 years of history at Tsukiji. 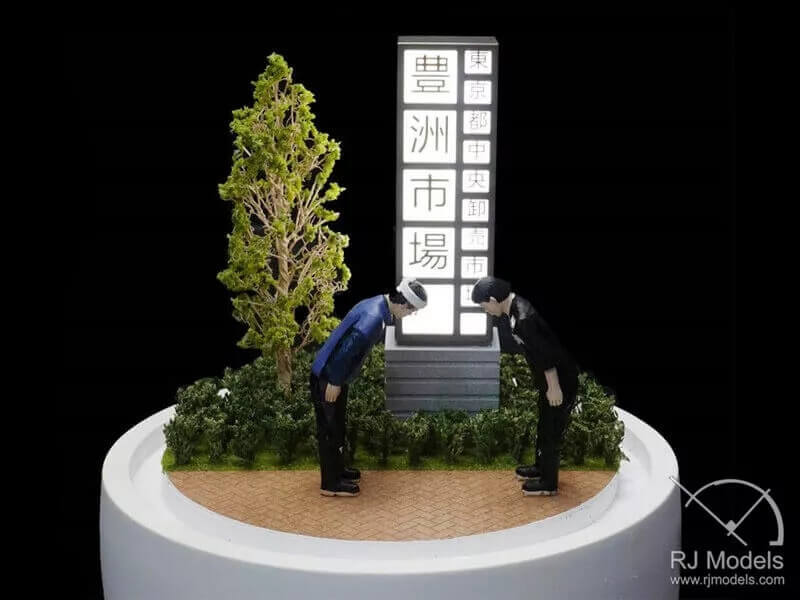 As the saying goes, “no banquet in this world never ends.” On the model display were the fish merchant and the sushi chef both standing next to Toyosu Market main entrance signage bowing to each other.

The model signified a show of gratitude over their co-operation in Tsukiji Market, while at the same time embracing a new era in Toyosu Market and a show of support in future co-operation.

Other than being the world’s largest fish market and having an abundance of fresh produce, Tsukiji legendary reputation was also a result of the expertise displayed in the field of seafood by all the fishermen, fish merchants, and the chefs.

For example, a fisherman can tell from a distance the size of a fish caught in the net by the reflection from the fish scales.

A trader that sells mackerel, with his experience, can pick out the healthiest looking mackerel from a pile of mackerel. 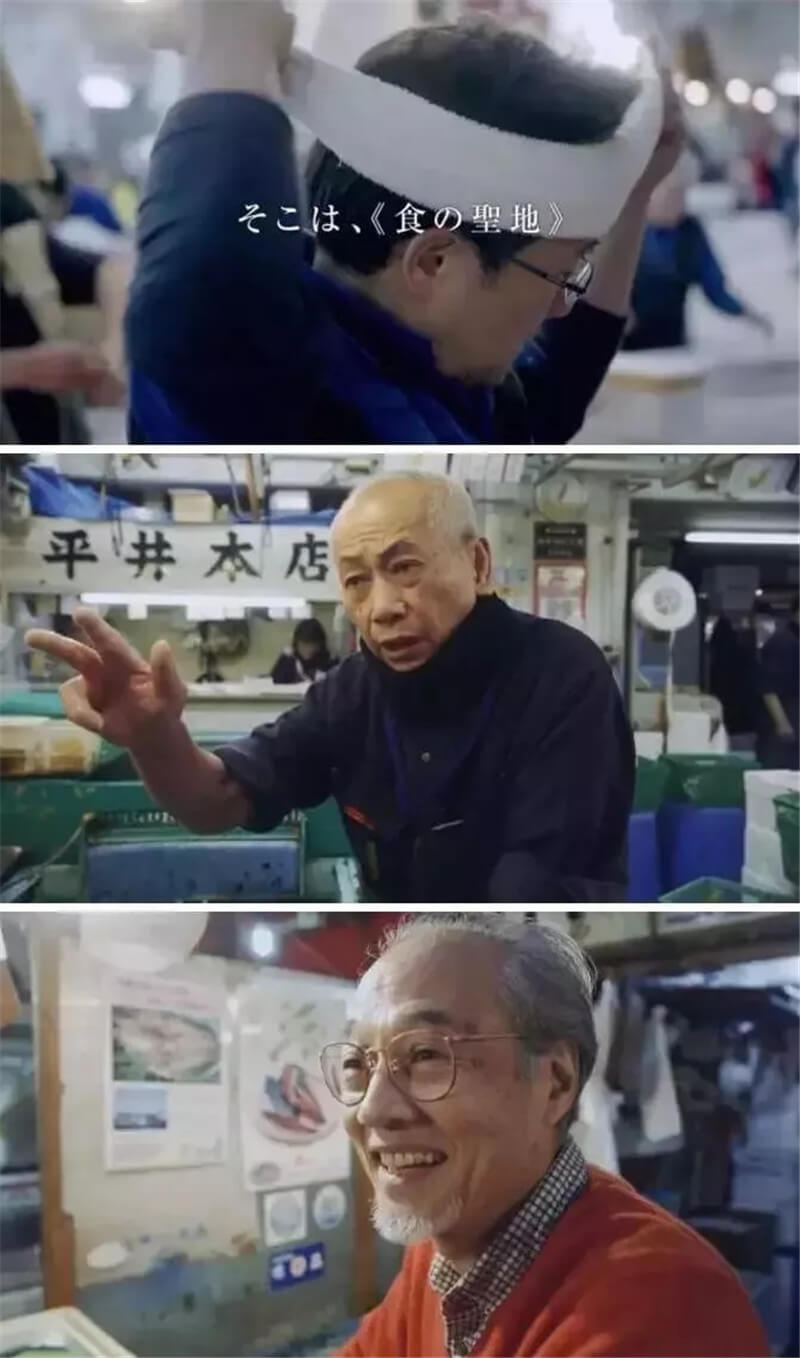 The word “Craftsman” is an honorary name to address someone with exquisite craftsmanship.

Tsukiji signifies the spirit of the craftsmanship, the act of continued excellence and its tradition.

It comes as no surprise that Tsukiji is the world’s unique and unmatched pilgrimage to the many food culture lover. 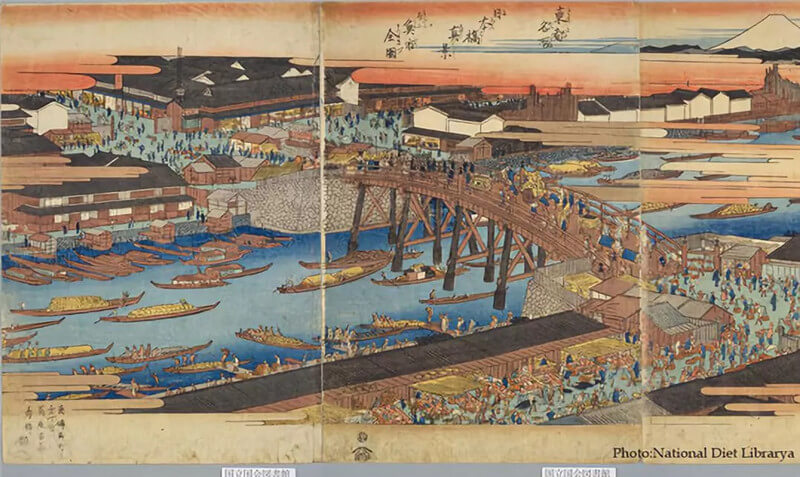 Indeed, before relocating to Tsukiji, Nihonbashi Bridge Uogashi fish market exists for well over 300 years, supplying diet for the Edo (Tokyo) population. The fish market saw several names and address changes, and finally, in October 2018, it opened a new history in Toyosu.

Although Toyosu does not have as rich a history as Tsukiji, however, we believe that in the future, Toyosu will most likely be a top-rated tourist attraction.

Also, just like Tsukiji, it can also evolve into a symbol representing Japanese seafood culture with a history that people will create enthusiastic discussion.

It offers a range of top quality architectural model with a tight deadline for competitive rates.

At every stage, RJ Models aims to provide top-quality architectural models for Japan to boost our client’s business to all architecture in the world.