Abu Dhabi is one of the most modern capitals in the Persian Gulf trust only the best architectural model maker.

RJ Models do various megastructures in the prosperous city.

We make scale models to fully capture the design element of an architect.

It will, therefore, be crucial to pick a model-making company that can deliver with professionality and precision.

As the top architectural model maker in Abu Dhabi, we provide you with supreme quality within a fair price.

And our architectural model makers always push to deliver the craftsmanship these structures deserved.

Abu Dhabi and the rest of the world can truly profound benefits by choosing RJ Models. 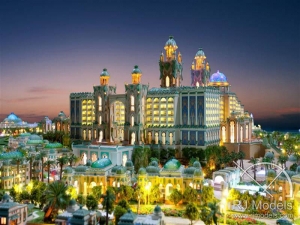 Our architectural model makers in Abu Dhabi really outdid themselves again with the Jewel hotel model.

The intricacy of this 1:250 scaled model project never hindered the team to deliver with just over a month’s time.

The color-palette stayed true as the architect designed it. 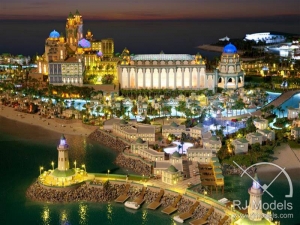 A spectacular sight greets viewers as the site model is teeming with landscape and waterscape in full development perspective.

To further amaze clients, we made use of a smart lighting system which is computer programmed to produce lighting effects.

This addition creates dramatic simulations for daytime or nighttime lighting for the architectural model.

The unparalleled craftsmanship of our architectural model makers in Abu Dhabi successfully gave life to this meticulous project. 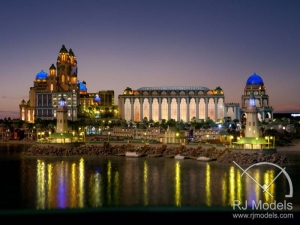 It only took 30 days for our architectural model makers in Abu Dhabi to finish developer Mubadala’s modern stadium model.

This stadium for major sporting events can hold up to 65,000 seating capacity intended to draw locals and foreign spectators alike.

Our ingenious team of modelers made it moveable enabling what’s underneath to be displayable.

A laser engraved stadium scene unfolds as the roofing moves to one side.

Full detail rows and rows of seats for the spectators surrounding the green playing field.

Added to that is the dramatic lighting effect highlighting the interior patterns within and around the stadium model.

Features a geometrical exterior landscape complementing the dynamic structure and a road busy with cars to complete the overall look.

Our client KPF indeed got what they paid for with regards to our top-quality project delivery in 30 days.

Airplanes coming off and landing on the airport strip will instantly recognize it for its X shape.

This makes for maximum use of space to accommodate more airplanes at a time.

Each arm of the X will serve as terminals which is one of the largest in the region.

The roof of the airport structure connotes the naturally wavy formation of the sands of the desert in the country.

This was no ordinary feat for the best model making company in Abu Dhabi.

It features a skylight to present natural lighting and energy conservation on the entire length of the roofing.

A glow of green light emanates around the whole complex creating a dramatic look from above. 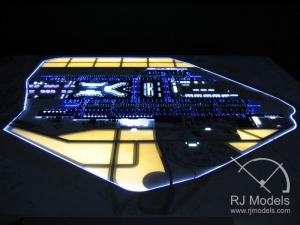 KPF’s trust for RJ architectural model makers in Abu Dhabi extended by having us commission their international airport model.

This is to display the facility within its vicinity as to how it will look with its surroundings.

To give their viewers a better insight into the immense airport design concept, RJ Models stepped up to the challenge.

The 1:5000 scale simplified the actual airport in this model, it nevertheless has a fully defined model of its own.

Our architectural model makers in Abu Dhabi professionally kept specific details of the architect’s design into the making.

It visually displays the intent to shorten every airplane’s taxiing distance, as well as a large area for plane stowage. 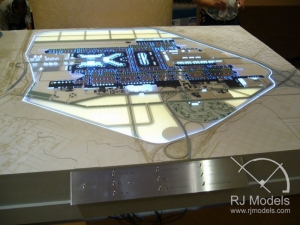 Road networks around the facility, zoning layout of the neighboring areas and plots of wide-open spaces as greeneries.

Our airport model-making company undeniably stayed true to the architect’s design integrity all throughout. 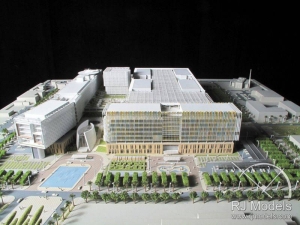 It incorporates hospital design in the traditional sense with the sleek modern appeal. 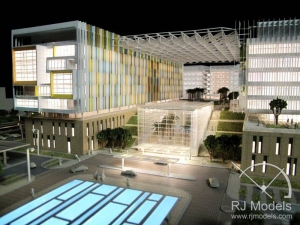 This huge medical city exudes the simplicity of clean lines such facilities have always been presented.

Amid the simplicity is a highly detailed full façade louvered windows with color touches.

Adding some modernity within the complex is a separate structure composed of asymmetrical concave panels surrounding a cubic base. 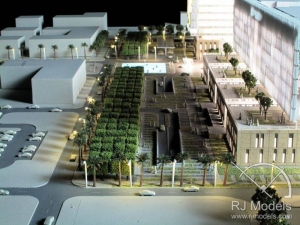 These street lamps light up, as well as the buildings to realistically give impact to its character.

No matter the size of a project, a fast one-month production period is just a bonus from us. 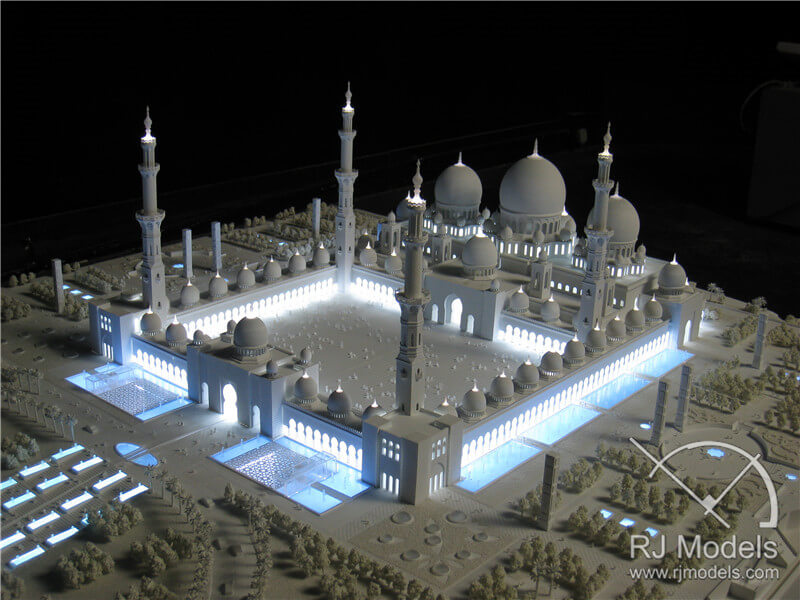 RJ Models presents with pride this award-winning representation of the Grand Mosque.

It is made to align in the direction of the Kaaba in Mecca, holiest of sites in the Muslim religion.

And the spectacular religious structure model must only be created by an equally spectacular model making company in Abu Dhabi.

This miniature manifestation of the Islamic faith is composed of magnificent domes characteristic of Muslim tradition.

The courtyard’s corners are adorned with four tall minarets rising about 107 meters in actual.

This illuminated arcade casts a reflection on the pools around it giving that surreal appearance. 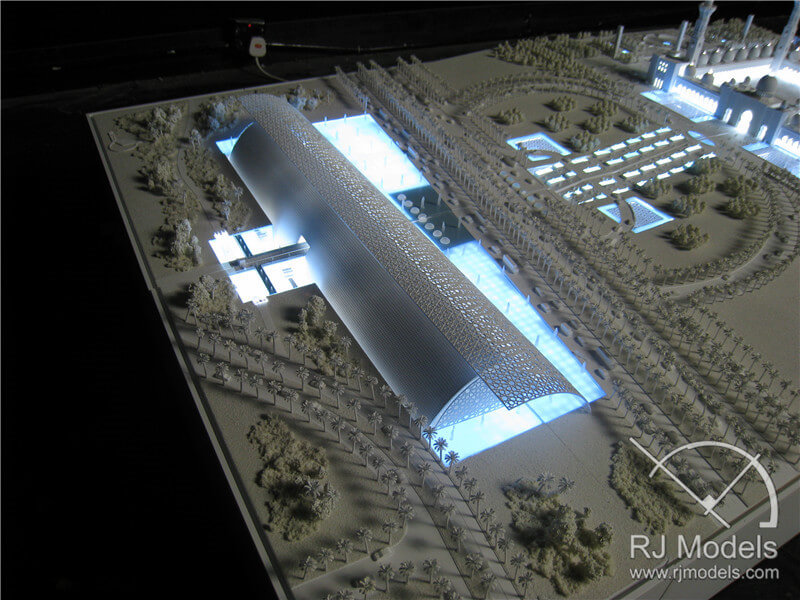 Dedicated craftsmen from our model making company in Abu Dhabi made consistent of the pristine white color motif.

A well thought out landscaping surrounds the entire perimeter of the mosque model.

Ethereal beauty is apt to describe not only for the real Grand Mosque structure but also the scale mosque model.

A description that RJ Model’s sure-handed talents are sure to present in every model project.

This depiction will be the master plan of the Abu Dhabi emirate in the near future.

This sprawling city model covers such an elevated level of detail which amazing features even the natural topography of the islands.

One can see the masterful zoning plan for each area according to its land use.

Residential areas with distinct types of housing along with the business and commercial zones make up this city planning project.

It displays several of Abu Dhabi’s iconic buildings, as well as the port area.

Looking down on it gives a spectacular aerial view too awesome to realize that it is just a master plan model.

This, in turn, will favor our Arab clients with increased investment potential and boost to tourism.

An architectural model not only reflects an artist’s talent but promotes a clearer understanding of how a structure will be.

It requires some of the most experienced and efficient staff in the industry to create such.

This is just what RJ Model’s is known for in Abu Dhabi and the rest of the world.

Even the smallest detail is never a big deal with us. On point replication of design as conceptualized by the designer is what our architectural model makers in Abu Dhabi aim.

Proof of which is the array of architectural model projects this emirate city has commissioned us to do.

Decades of expertise complete with professional package make us the best model making company around.

We also have a partner, 3DR Models to support our model making service in Middle East District for ensuring the quaility of model making.

Only the highest quality results that our clients deserve.

Failure to do so will never come out of our architectural model building team anywhere in the world.

We even offer to ship your architectural scale model to every major location.

The biggest and brightest cities worldwide trust us, let us add you as architectural design companies on the list.