The Birth of 30 St. Mary Axe. RJ Models Creates the Model of the Most Ecological Building The Gherkin

The Previous and Present Live of The Gherkin.

On April 10, 1992, the Provisional IRA detonated a truck with 100 pounds of explosive near London’s.

This killed three people and injured several others. 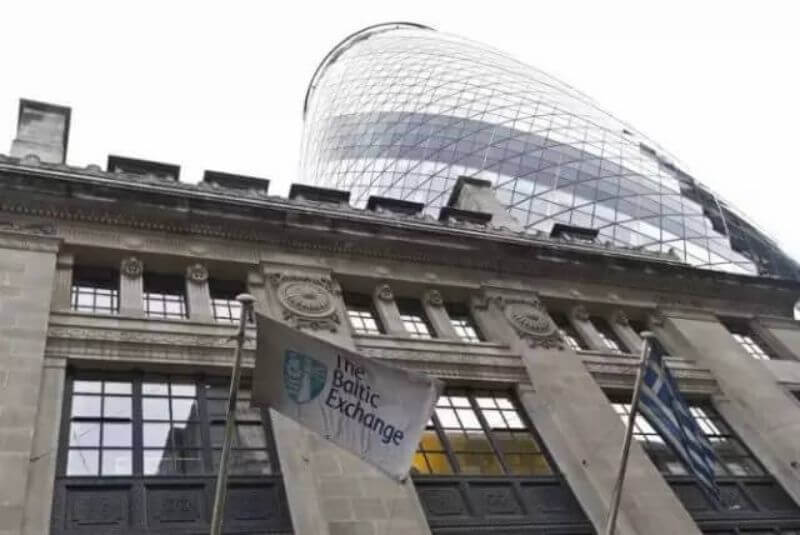 ▲30 St. Mary Axe stands on the former site of the explosion.

Most of the offices in the shipping exchange and the trading hall ceased functioning.

The building eventually underwent demolition in 1998. 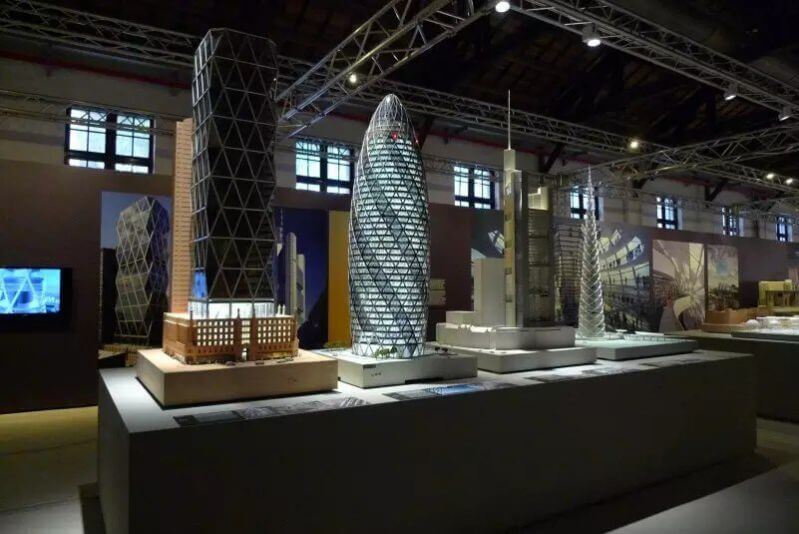 ▲In 2011, RJ Models prepared several models for Foster + Partners’ “The Art of Architecture” world tour, including The Gherkin.

The Gherkin stands at 179.8 meters tall with 50 floors. Architects from Foster+Partners are the team behind the design.

▲If I were not an architect, I would be a pilot.

Since the 1970s, he has gained wide recognition for many of his high-tech architecture designs.

Today, he still possesses a profound and long-lasting influence on contemporary structure.

At the presentation speech, the jury said:

“From his very first projects, it was evident that he would embrace the most advanced technology appropriate to the task, producing results sensitive to their sites, always with imaginative solutions to design problems.”

▲The delicate and exquisite model of The Gherkin.

The thin and slender model of The Gherkin completed by RJ Models.

The glass curtain clearly distinguishes the upwards spiraling atrium and the office spaces. 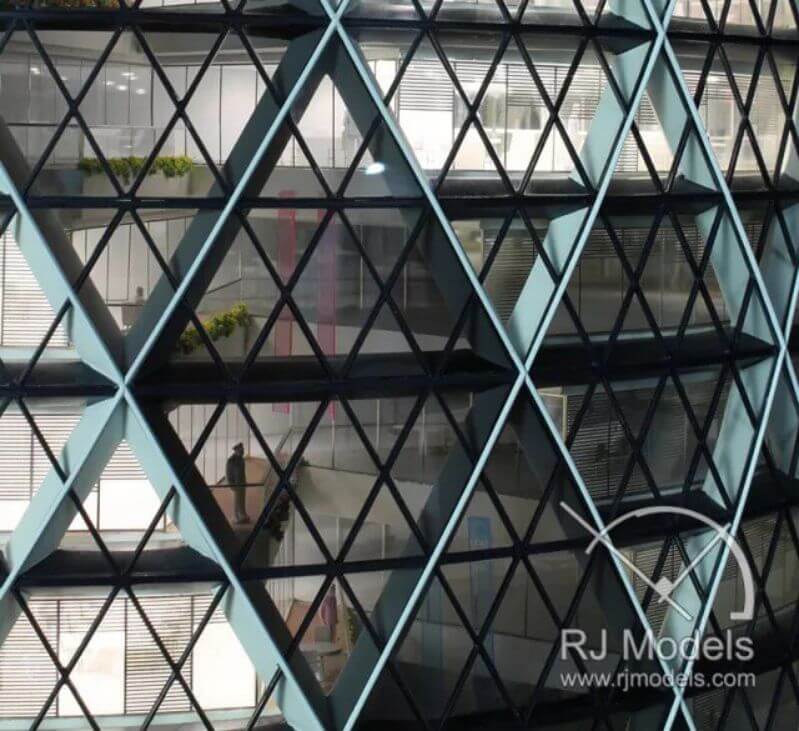 ▲Detail of the Building Model.

The 1:100 model of The Gherkin displays the structural concept of the interval between the internal and external curtain wall.

To do this, RJ Models has to stick the glass panels individually, tolerating no errors between each gap.

At the same time, our architectural model makers in the U.K. attentively design the interior details and interior lighting.

This creates a vivid display of the entire model. 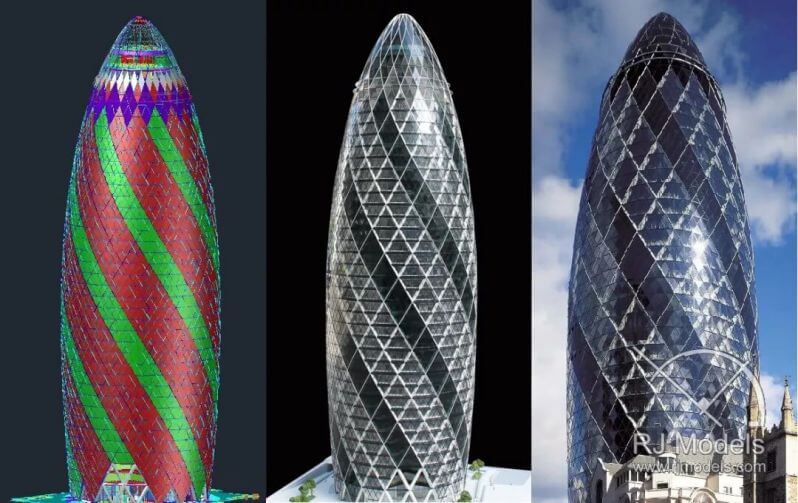 ▲A comparison between the drawings, model, and the actual building.

Unlike the traditional box shape office building, 30 St. Mary Axe is in the shape of a bullet.

Each floor has a diameter that changes with the curved facade of the bullet-shaped building.

The circumference stretches between 162 meters to 185 meters on the 17th floor before tapering off at the top.

Structurally, every level radiates outward into a 6-finger structure, forming an atrium between each finger.

The atrium are linked vertically, but each floor deflects at an angle from the previous level, creating a helix structure.

The triangular atrium ensures that sufficient light passes through into the interior of the building.

A ventilation system is established to promote air circulation within the building using the principle of pressure change.

Behind the advance design of The  Gherkin

Going back to the numerous corporation between Foster+Partner and RJ Models, starting from his first airport project, London Stansted Airport.

Included in this design is a 15-meter-high interior space, exposed beams and structural components as well as other facilities. 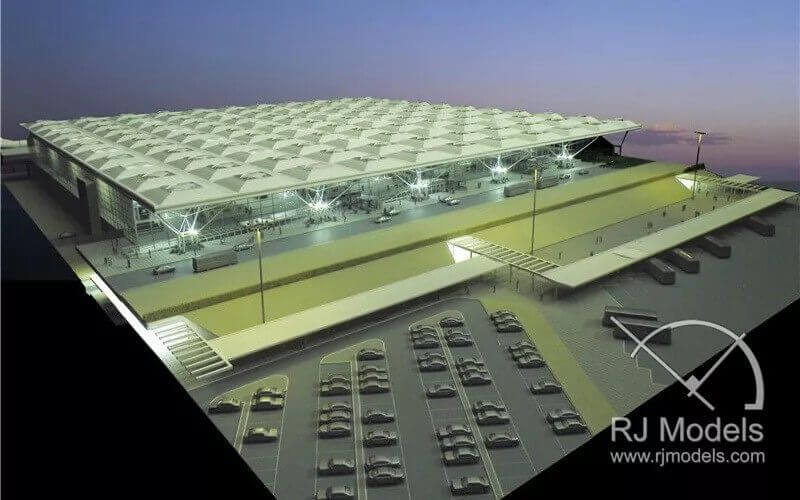 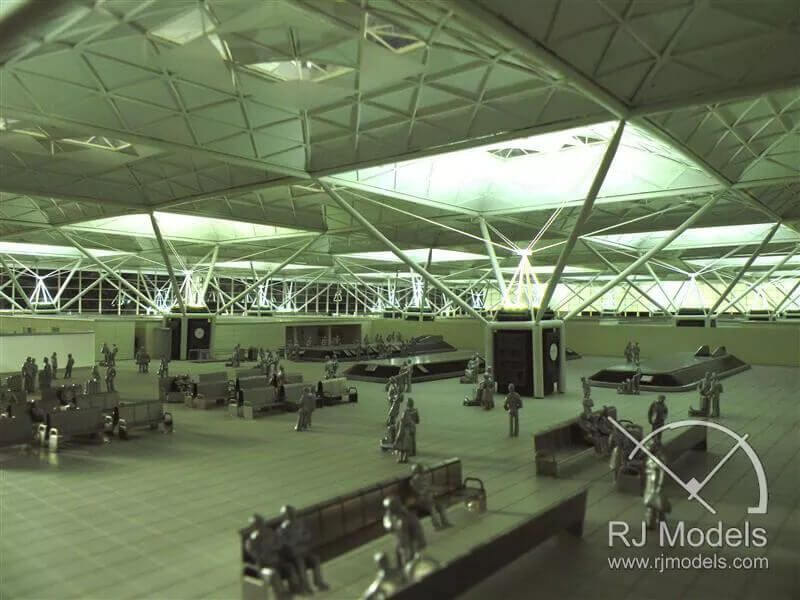 The emphasis is creating a contemporary design that allow natural lights to enter the ceiling, hence effectively reducing energy consumption.

The initial display of Sir Norman Foster application of aerodynamic in his architecture design. 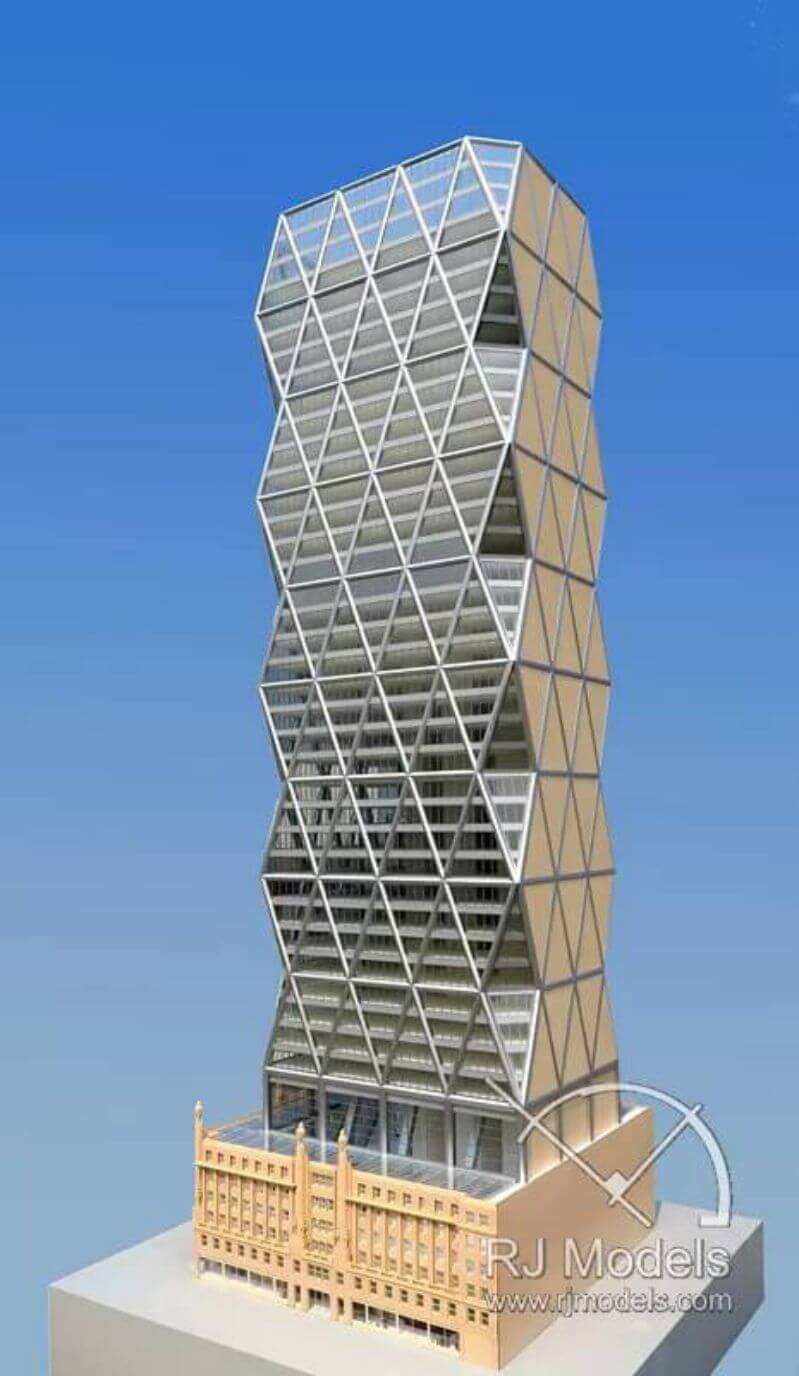 ▲The Hearst Tower Model. Another collaboration with Sir Norman Foster.

In creating the Hearst Tower model, it reveals Sir Norman Foster detailed consideration between the architecture and its environment.

Another example, the use of the diagrid structure in Hearst Towers to reduce the use of steel. Used these technologies to create a green building.

Hearst Towers became the first skyscraper in NYC to receive the Gold LEED (Leadership in Energy and Environmental Design) Award. 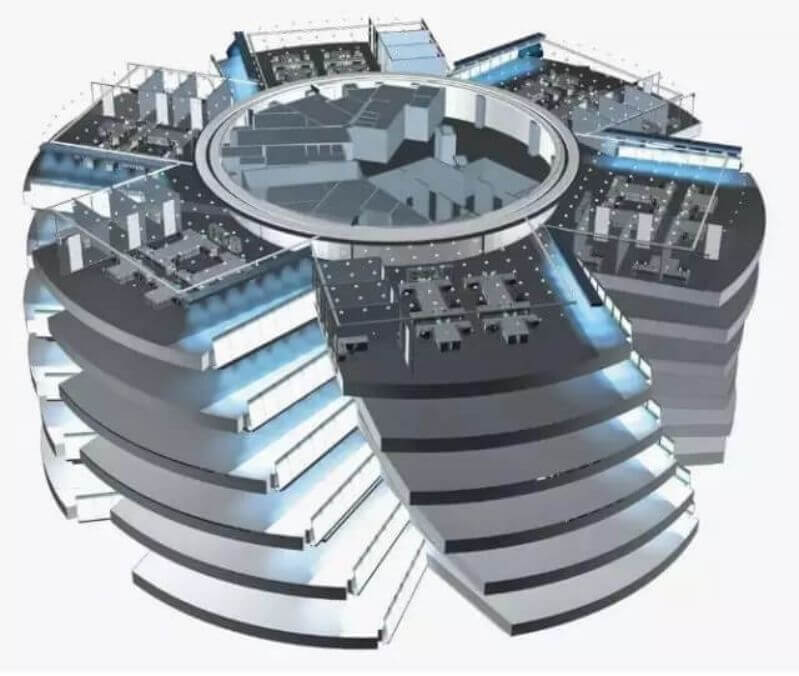 ▲The display of the building’s interior.

30 St. Mary Axe is one of the classic case studies displaying the application of aerodynamics in architecture design.

The aerodynamics use in the design of The Gherkin provides wind deflection and minimize wind resistance to the building load.

The spiraling helix atrium creates a natural social point for the users of the building, a refreshment point or meeting point.

And it also acts as a light source and function as ventilators distributing fresh air to the office units.

Such an energy-saving design saves The Gherkin 50% of the energy used by the average office tower. 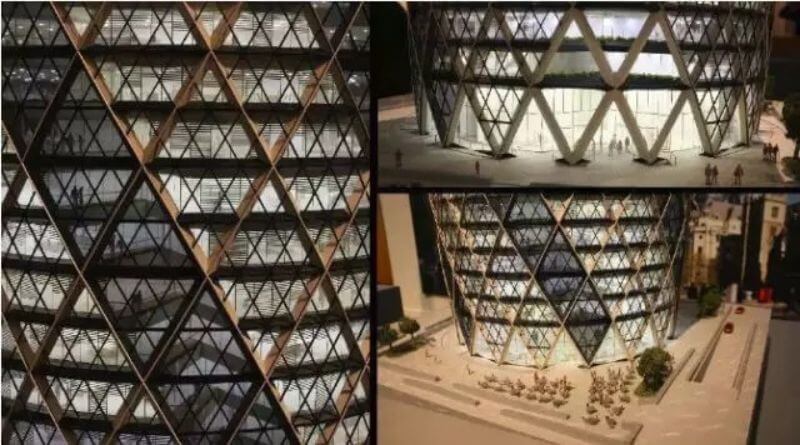 ▲Detail of the Office Building Model

The structural makeup of 30 St. Mary Axe shows that the building’s curtain wall is also a load-bearing structure.

It uses a diagonally braced structure consisting of several triangles to support the weight of the building’s core.

Rather than distributing the load vertically from upside-down, it distributes the weight on the cross-steel nodes of the diagrid structure.

It forms a more stable system and helps to improve seismic resistance.

From the design of Hong Kong and Shanghai Banking Corporation Building, with the concept of using gardens to divide the whole building into village-like units.

And even the Frankfurt Commerzbank Tower with winter garden that spirals up the vertical atrium. 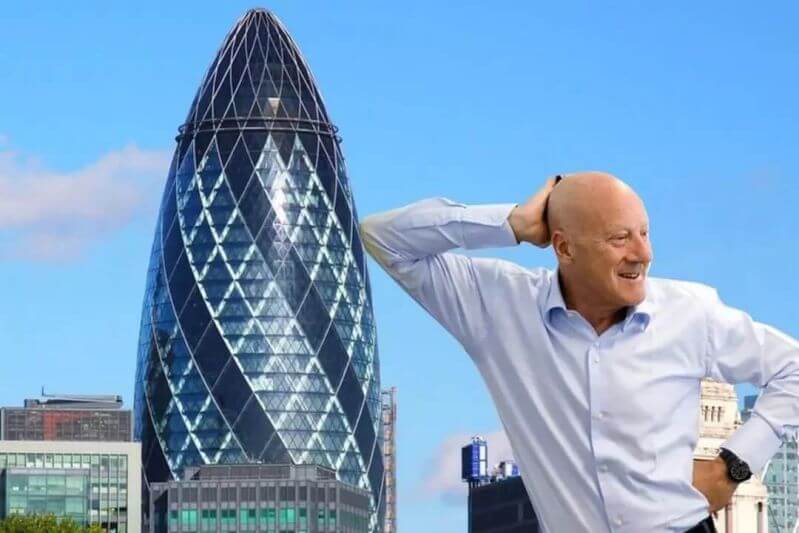 This made the building the first ecological skyscraper in London.

There are many ways to display the space and shape of a building design.

However, the most intuitive way for the viewer to understand the architect’s intent is undoubtedly the use of meticulous models.

It offers a range of top quality architectural model making service with a tight deadline for competitive rates.

At every stage, RJ Models aims to provide top-quality architectural models, driving our client’s business to all architecture sectors worldwide.