In the architecture industry, there’s one person who dares to challenge the traditional concepts of architecture.

This innovator created new world-class projects based off of smooth line designs.

In 2004 she earned the Pritzker Architecture Prize and is known as the “Queen of the curve” among world-class architects, Zaha Hadid.

The design company she created named Zaha Hadid Architects, has always had a strict standard for detail, and thus, has never before incorporated third parties into their production process.

However, in a great honor, RJ Models collaborated with Zaha Hadid Architects in 2011 in Beijing airport design competition.

At the end of the competition when Zaha Hadid won, RJ Models also received recognition, beginning a new line of cooperation among two architectural giants.

The rest of this article details the process of cooperation between the two to overcome challenges in their first project to create a beautiful masterpiece. 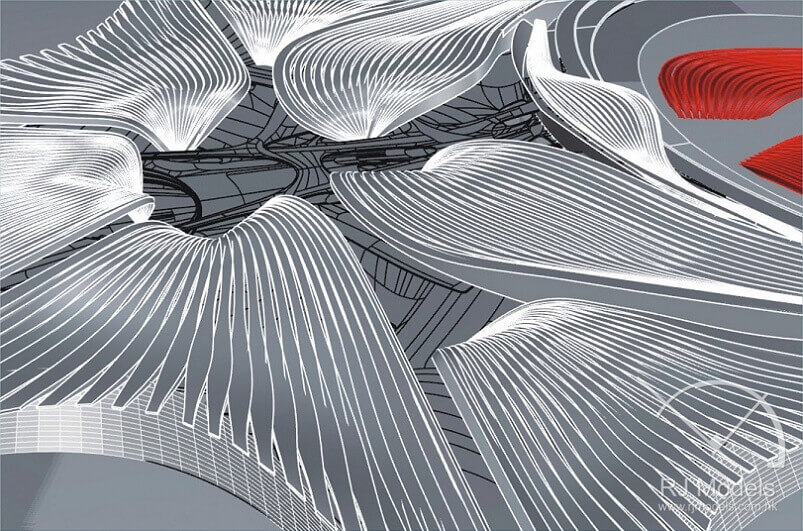 This architectural model was intended to provide an overhead view of the airport and provide a general idea of what it would look like.

The next model would have a ratio of 1:1600 and a dimension of 2500 mm x 2500 mm and would be used to demonstrate the various zones of the airport and their functions.

Due to the time constraints, once RJ Models received the final design from Zaha Hadid using Rhino Software, they immediately marshaled a team of ten senior architectural model makers to check over the drawings and repurposed them to divide the airport into its different components.

This reorganization process would ensure a smooth production process and ensure project completion within the mandated timeline. 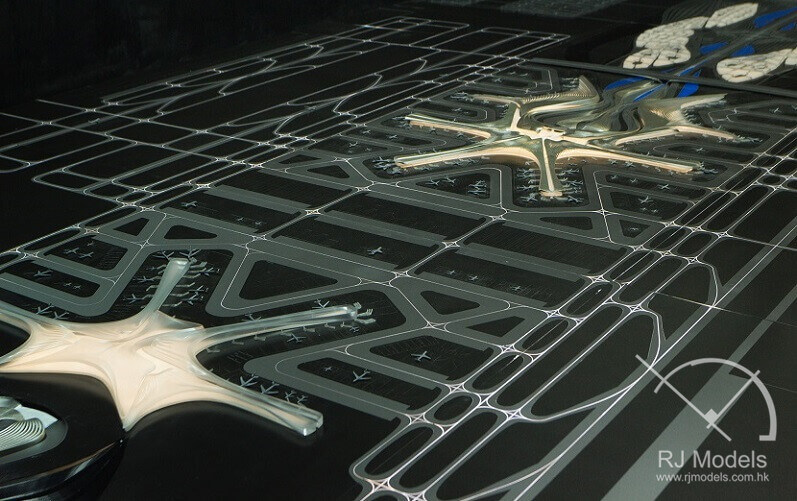 During the redrawing process, our architectural model makers in China had to devise a way to shrink the model on a scale of 600 to 1200 times smaller, while still maintaining the integrity of the curve found in the outer walls.

To precisely maintain the flow within the curve of the walls, RJ Models used multiple CNC machines to quickly carve and produce the various pieces for assembly.

Before putting the pieces together, the senior officers within the modeling division polished each individual piece to achieve a shine necessary to show off the flair within the design.

For more specialized pieces such as the domed skylight, we used 3D printed architectural model technology to have those pieces ready for final assembly.

We gathered up the pieces and had 30 different workers working overtime to combine the pieces together and reinforce joints so the model could be safely delivered within the requested timeline. 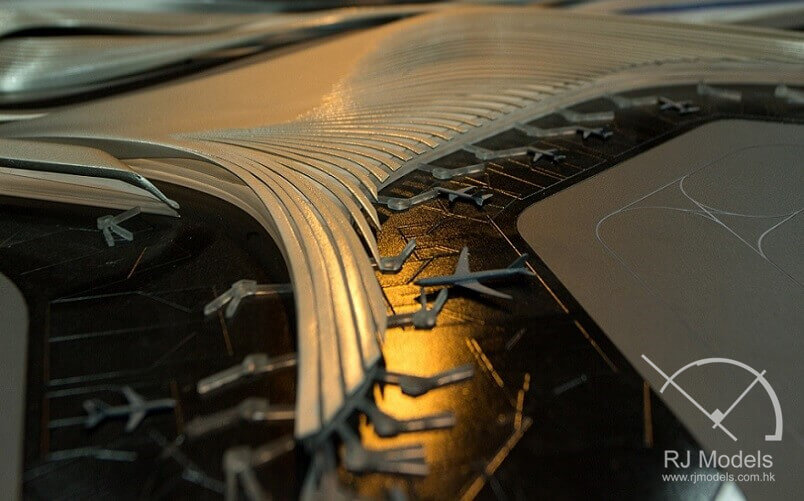 The most important part of the model was how the exterior of the airport looked. Zaha Hadid’s design had an “ultramodern” feel to it.

To ensure that the model lived up to the spirit of the design, we sprayed the exterior of the sample to exhibit the metallic feel of Zaha Hadid’s design 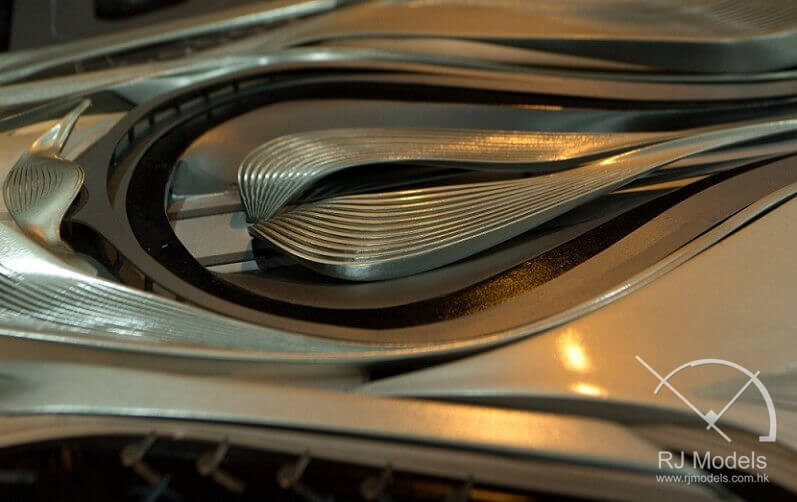 4. The lighting of the model:

Lighting was added to the model to not only make the overall model stand out but also to impress upon the judges of the competition, Zaha’s vision.

To do this, RJ Models had five different shades of lighting on the model, to demonstrate the areas and functions of the airport.

For example, arrival and departure had their own different colors.

Furthermore, the lighting controller was placed within easy reach of a presenter to help with the presentation of the model.

This helped effectively communicate to the judges the various features of the airports, and the themes behind each one. 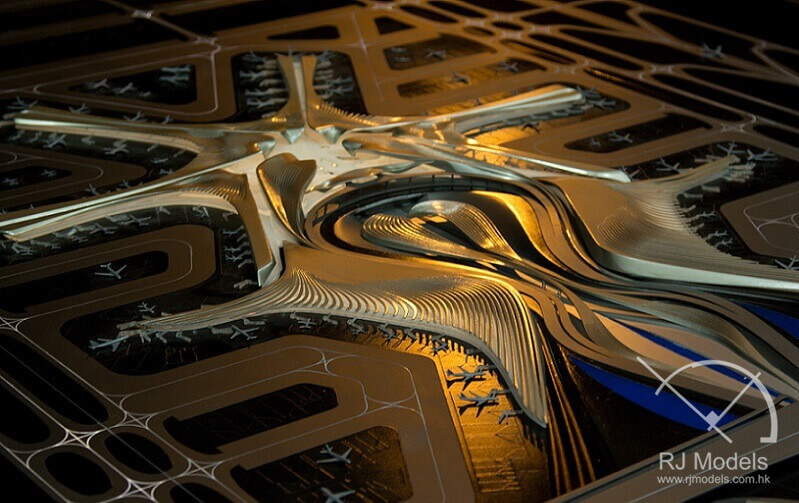 To ensure safe and rapid travel from Shenzhen to the Beijing competition area, our packaging division which has many years of professional experience, produced a box for the model and arranged for three different truck drivers working in shifts to deliver the model in 24 hours, from Shenzhen to Beijing.

Therefore, they would meet five members of the construction division to finalize installation of the airport model. 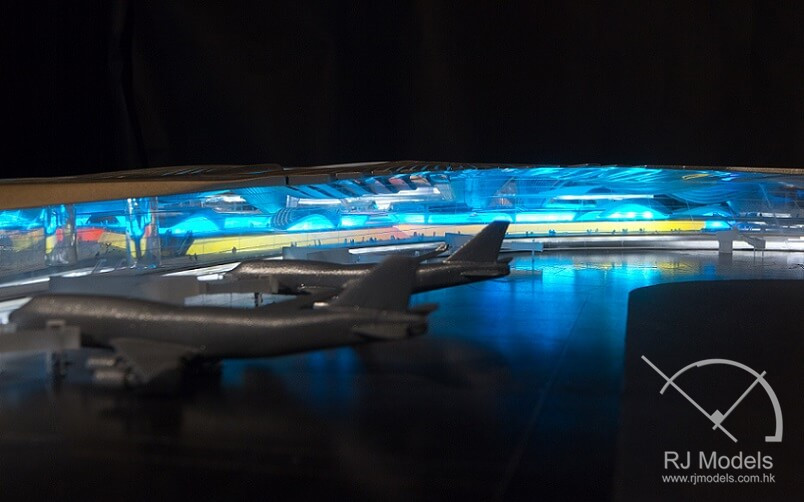 Zaha’s review team upon seeing the speed and quality with which the model was produced were highly satisfied.

Upon reflection, this project was challenging, but also very self-satisfying. 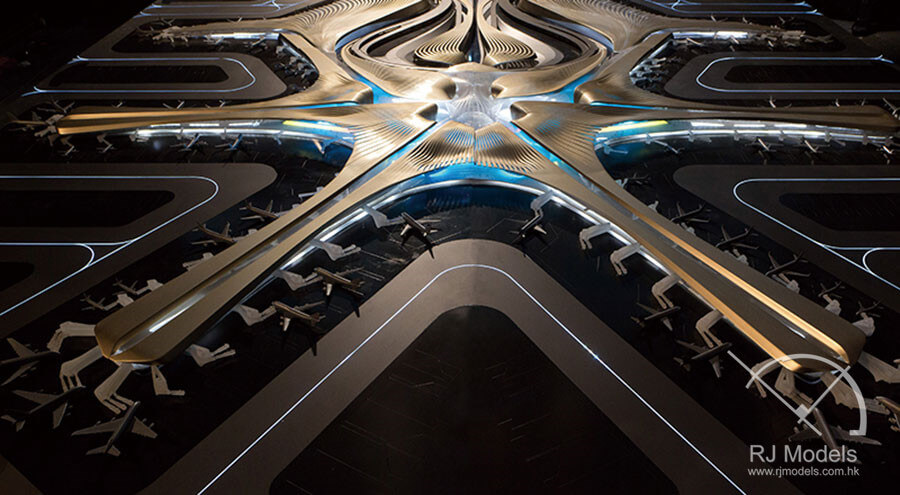 According to Zaha’s corporate partner ADPI, this airport will help relieve the stress on the current Beijing Capital Airport and will become the world’s largest airport terminal, a key hub in Beijing’s economic and regional transportation network.

RJ Models was pleased to have participated in the outstanding design team and are proud of the work of airport models we have done. 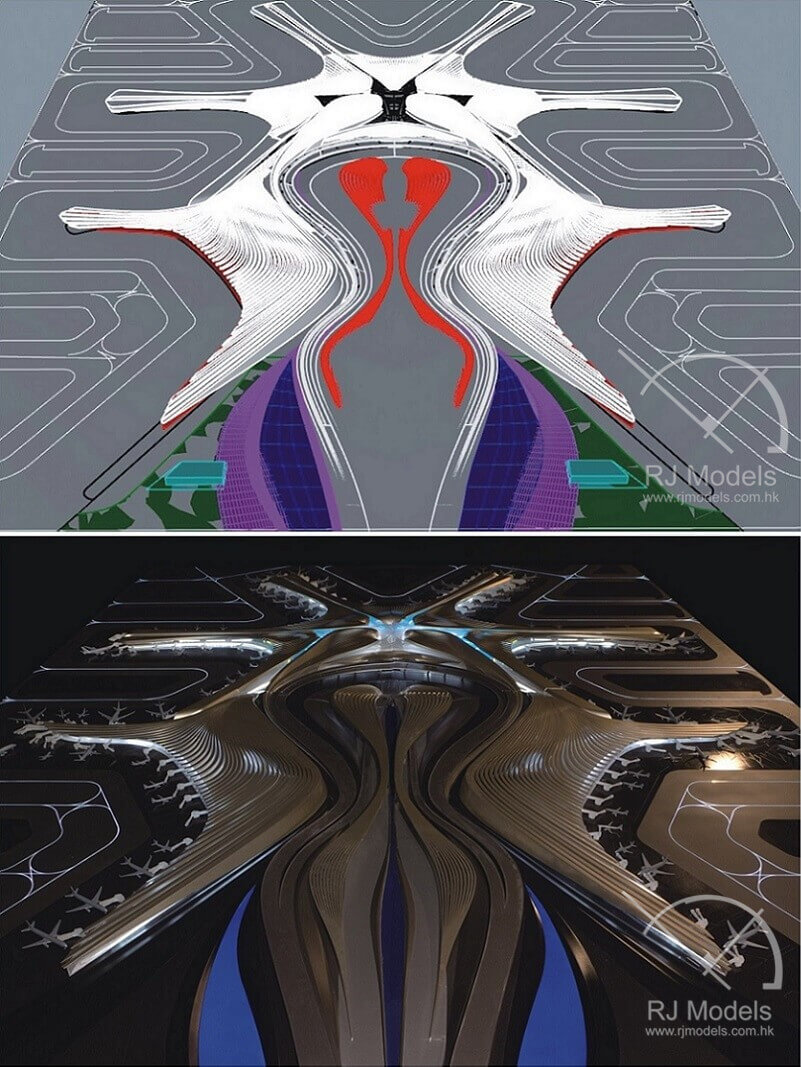