The model making of Göbekli Tepe by RJ Models.

This earliest architecture in the west is both mysterious and solemn.

The historic relics of the prehistoric monument where our ancestors gathered to worship, experienced the sunrise and sunset, the changed of seasons and life and death.

Every living thing has a spirit, and history is very often inadvertently the medium used by the spirit to communicate with us today. 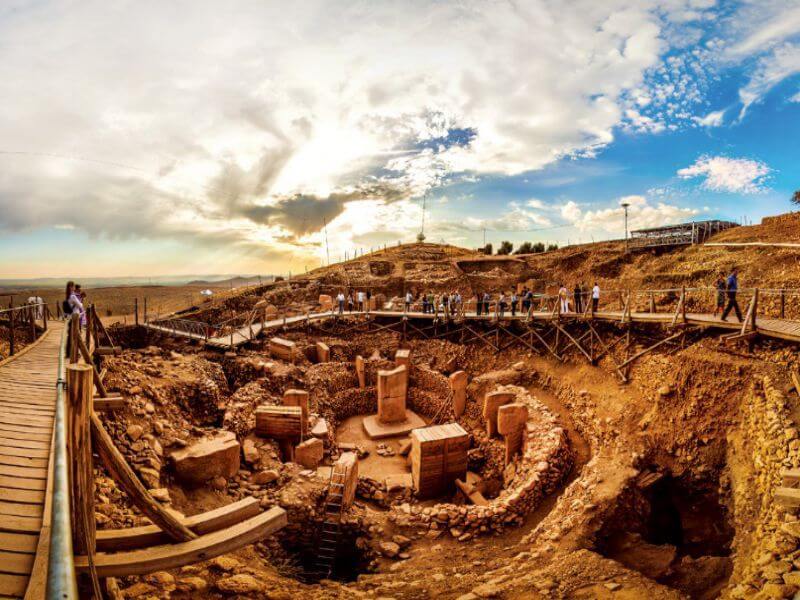 Göbekli Tepe is 14-km away from the city of Şanlıurfa, on the highest point of a mountain ridge in Turkey.

It is the world’s most ancient temple, dating back 12,000 years.

The T-shaped stone pillars and the totem-like relief sculpture of Göbekli Tepe. 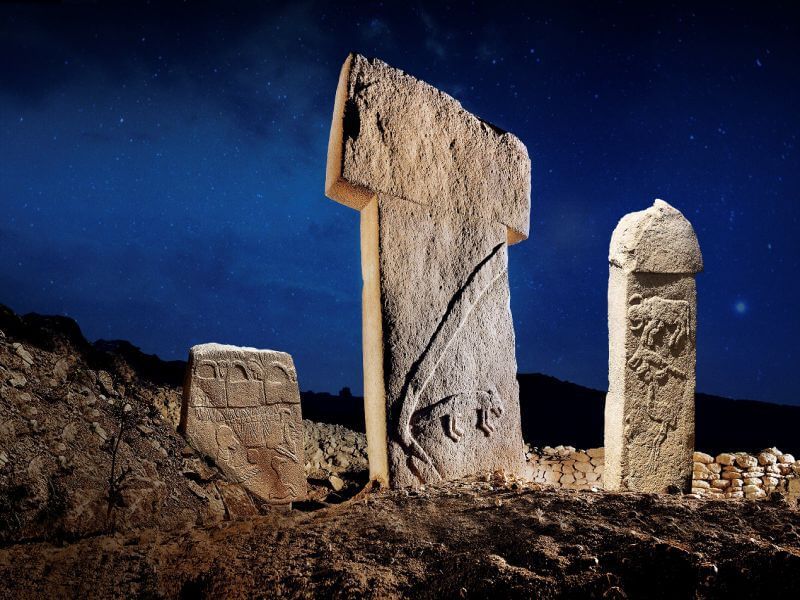 The stone pillars standing ceremoniously under the starry night sky. (image from the internet)

Curiously, these T-shaped megaliths encircled every ring-shaped structure in the monument.

Some but not all of the pillars, display carved out artworks in the form of animals.

A number of these T-shaped pillars appear to have arms on the side, making them look like a human. 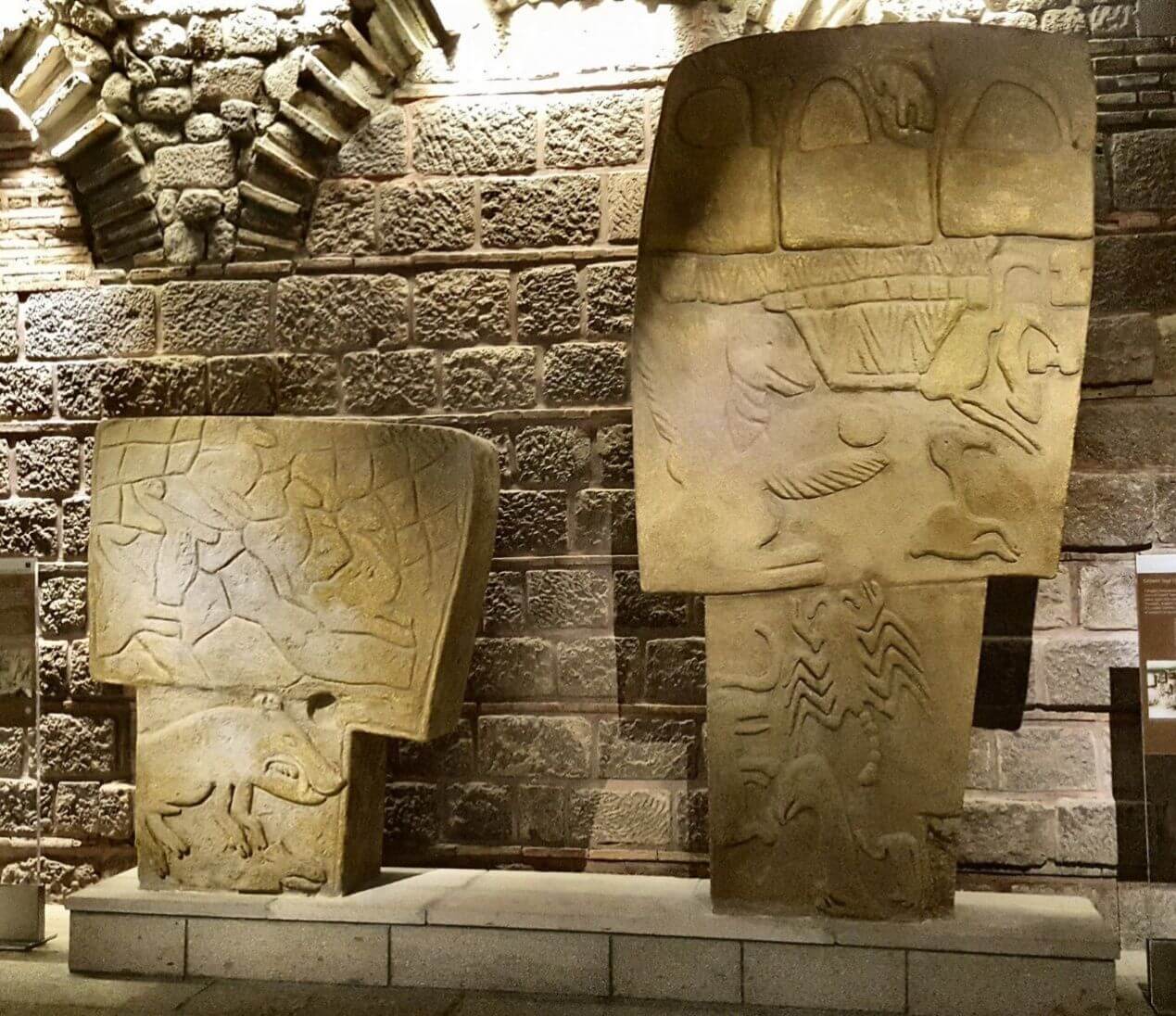 Two taller pillars stand in the center of each circle facing one another.

The stone pillars weigh between 14 to 16 tons.

On the stones are reliefs depicting animals such as wild boars, cranes, foxes, snakes, scorpions, lions and bulls.

The stones feature numerous relief sculpture of male animals. (image from the internet)

The archaeologist also discovered symbols such as circles, wheels, half-moons, and what appears to be an “H” symbol carved either vertically or horizontally.

These symbols seem to be recording a particular message.

The T-shaped pillar resembles a person standing, with the horizontal stone slab symbolizing the head.

Some of the stone pillars have bas-relief of arms and palms, as well as clothes and belts but no facial features. 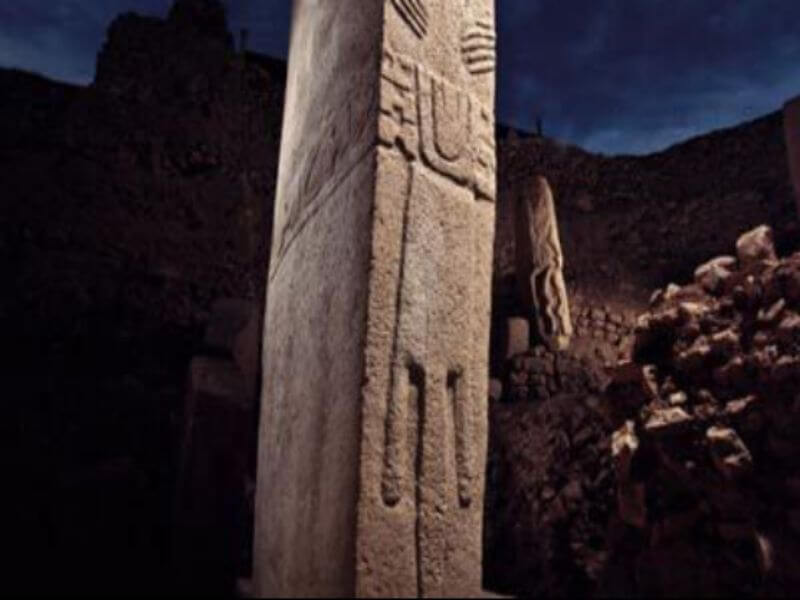 With both arms by the side, the stone pillar bears the stern appearance of a guard and yet still seemingly adorable. (image from the internet)

Though still a mystery today, archaeologists speculate that the two pillars suggest they are both male and female.

It is hard to imagine how the people from 12,000 years ago can carve out such vivid and lifelike artwork with just stones as tools, Göbekli Tepe, a highly valued monument.

Archaeologists have yet to discover another prehistoric civilized structure that surpasses Göbekli Tepe in age.

As an extremely precious heritage in the history of humankind, Göbekli Tepe is highly-valued by the Turkish government.

Furthermore, in 2018 it was designated a World Heritage site by UNESCO. 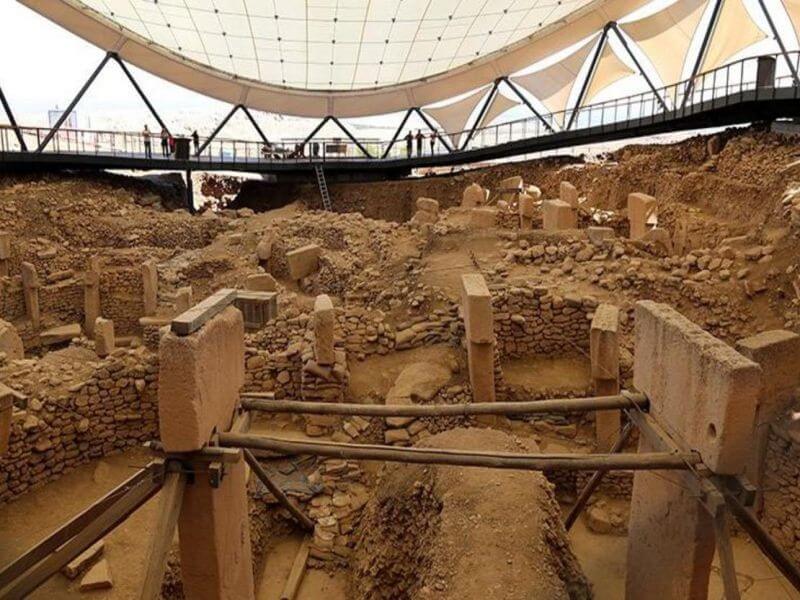 Protecting the site is as important as preserving the artifacts. (image from the internet)

Relying on his insights of prehistoric monuments, Archaeologist Klaus Schmit made history with the unearthing of Göbekli Tepe.

To commemorate the discovery of Göbekli Tepe, the Turkish government and the European Union invested nearly 600 thousand Euros in the construction of a 4000 square meter steel roof structure. They also designated 2018 as the “Year of Göbekli Tepe.”

To present the monument in its appearance from 12,000 years ago, RJ Models was fortunate to be invited by the Turkish Government to professionalism and creativity recreate these prehistoric relics.

Firstly, using the blueprint that shows the position of the enclosures of the monument, the model team guess the hand-drawn historical data.

They create and re-draw the plan on a 3D file and mark-up the different T-shaped stone pillars.

Then, using 3D printing, they print out the initial model of the main enclosure of the monument.

Bird’s eye view showing the position of the enclosures of the monument. (image from the internet)

From the hand-drawn images of the historical document, we discover that the “artisan” spirit is well-linked to the entire history of humankind development.

Even in the prehistoric era where tools were primitive, the ancestor’s conscientious and persistent pursuit towards beauty is evident.

To reflect the historical drawing accurately, RJ Models made every effort and carefully restore the relief sculpture to its exact original state. 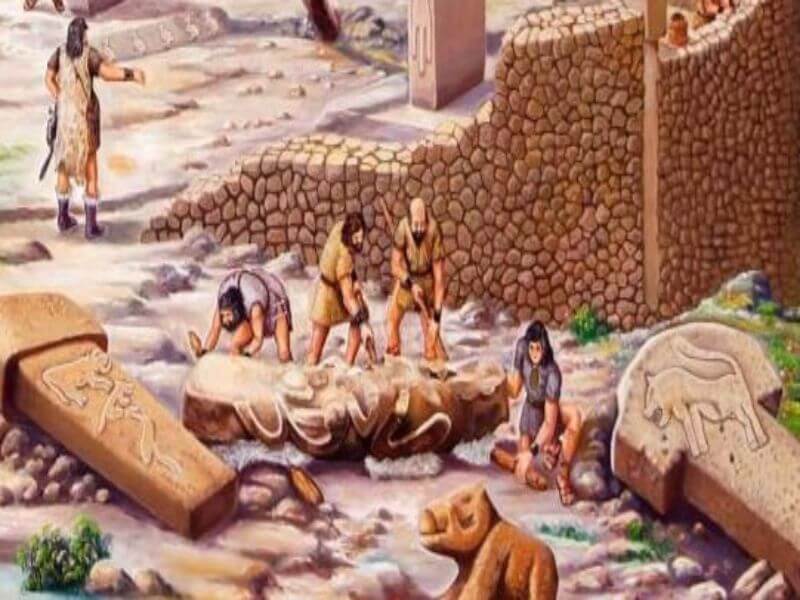 After the machine carved out the geographical creases, the rougher and uneven surface was manually handcrafted to make up for any faults and to achieve a more delicate appearance. 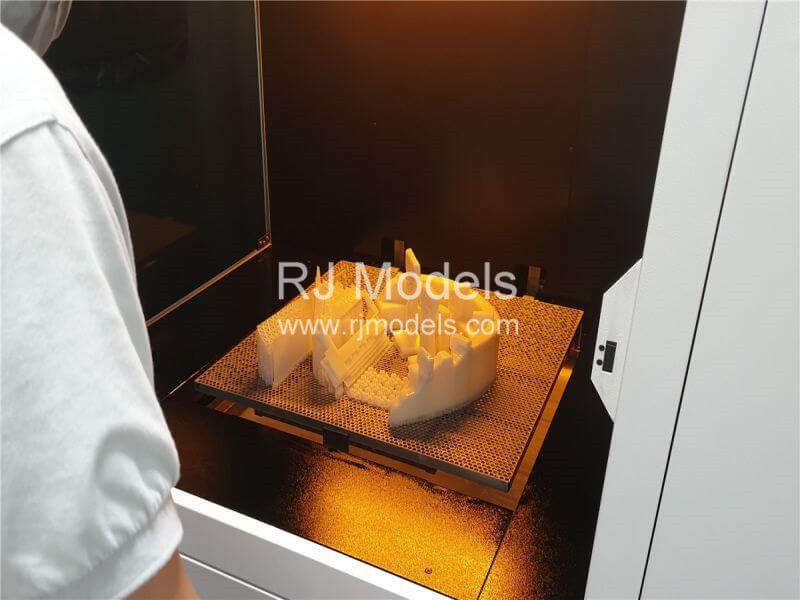 After every few decades, the ancestors would bury the newly built larger ring, encircled with the T-shaped pillars, with loose stones.

They then replaced this more massive ring with the construction of a smaller circle. 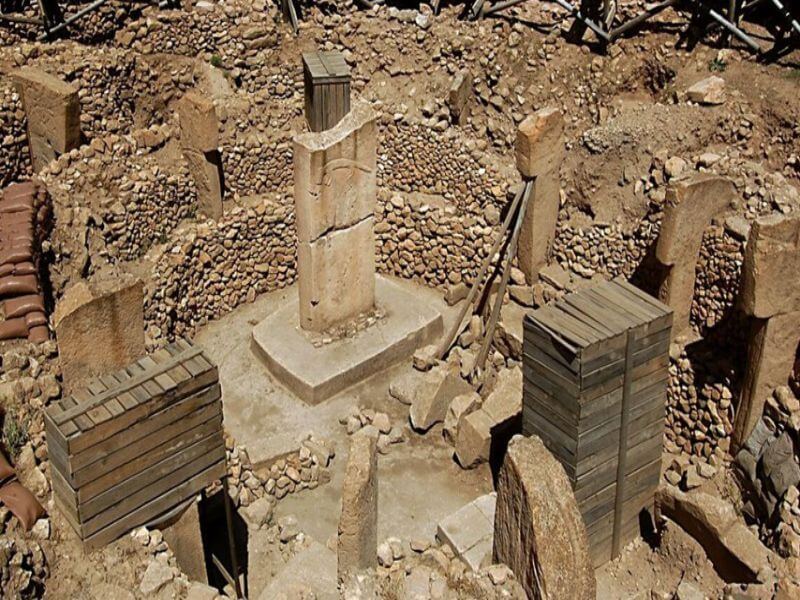 It is the presence of these crushed stones that preserved these T-shaped pillars. (image from the internet)

Once the broken stones filled up all of the rings, the ancestors would build a new ring in the vicinity.

Consequently, the ground of the ruin is on a mound that is approximately 15 meters above the surrounding grounds.

Since there is a need to record the excavation process of the cultural relics, it is essential to show how the ancestors buried the ruins. 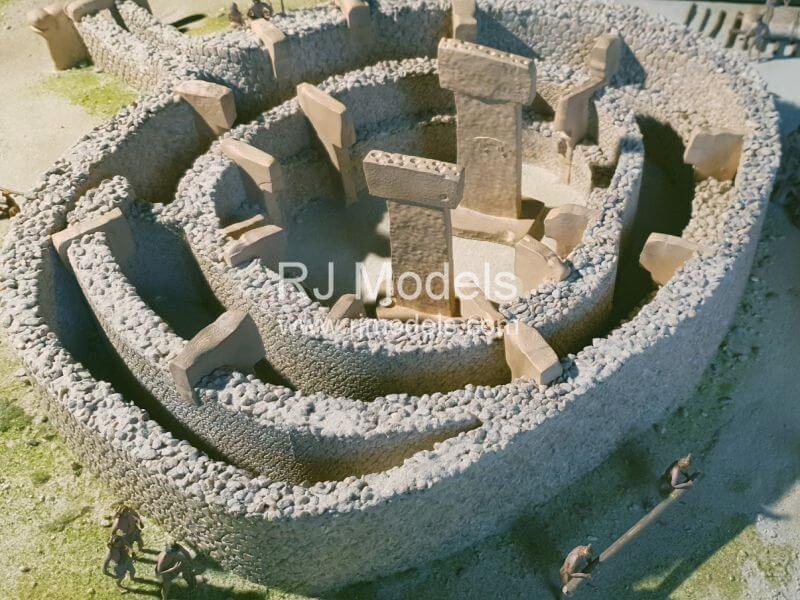 The handmade stone wall made the model look life-like

The stone wall is printed using a 3D printer. The surface is then painted with spray paint to bring out the effects of the tightly piled-up stones.

The texture and the color of the stone wall give a hint of its ancient history.

By which the construction process is unimaginable. It is hard to comprehend how humankind can build such a miracle with only their “bare hands.”

In the Neolithic age where hunting is a means of survival, the prehistoric ancestors begin mastering technologies, including site selection, material selection, processing, and transportation. 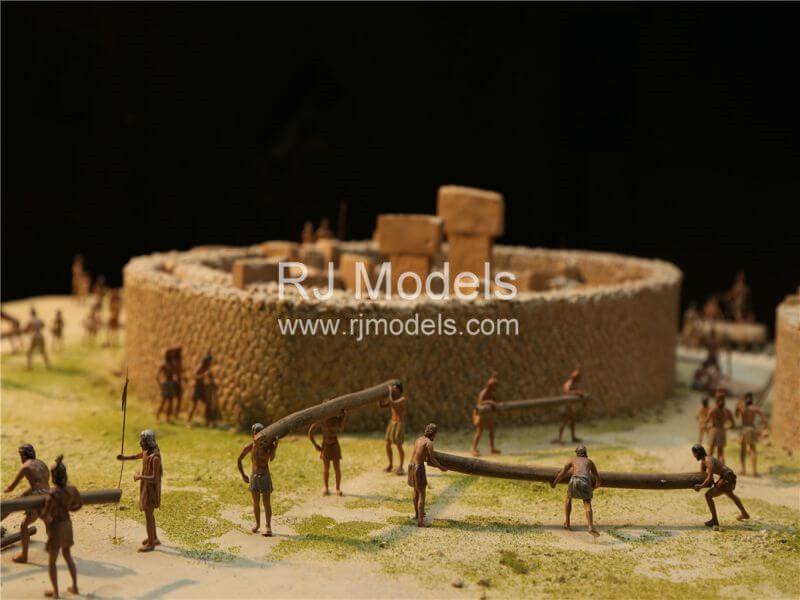 They then placed the slab of stone on the logs lined up on the ground.

Using the principle of wheel rotation, they transported the giant stone pillars up the hill, from a quarry 2 km away. 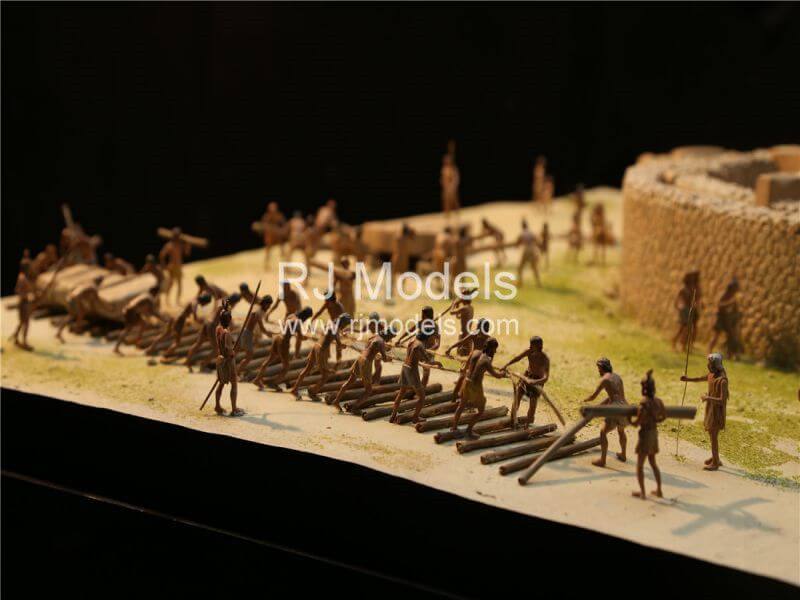 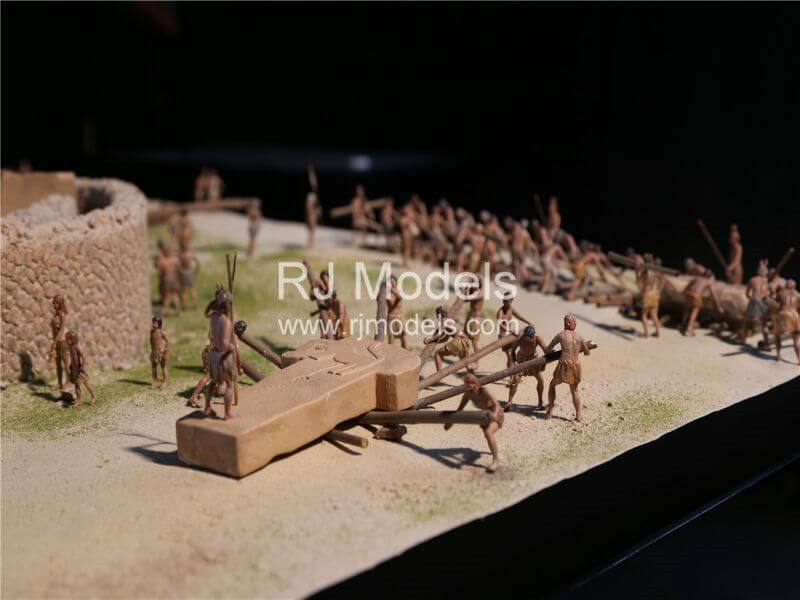 Humankind has long been familiar with the principle of leverage

To stand the stone pillars up, they tie the rope to the horizontal end of the T-shaped stone pillar.

Drawing support from a wooden frame, they hoisted the stone pillar up so that the other end of the stone stood on the ground.

Based on the hand-drawn manuscript, RJ Models put their speculation on the construction process into the design of the scene on the model. Naturally, the completion of such a tremendous and massive job must rely on the collaboration of the ethnic community (image from the internet) 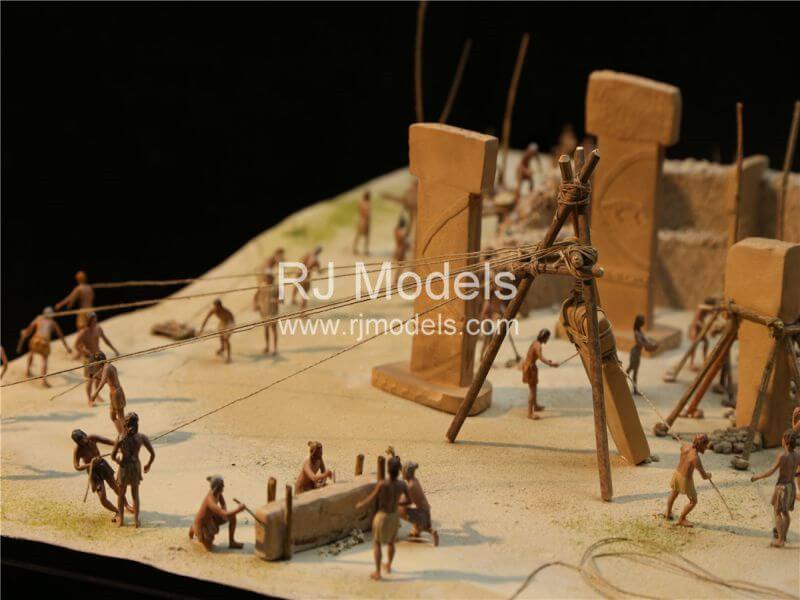 It is also clear that hemp rope is sturdy and strong 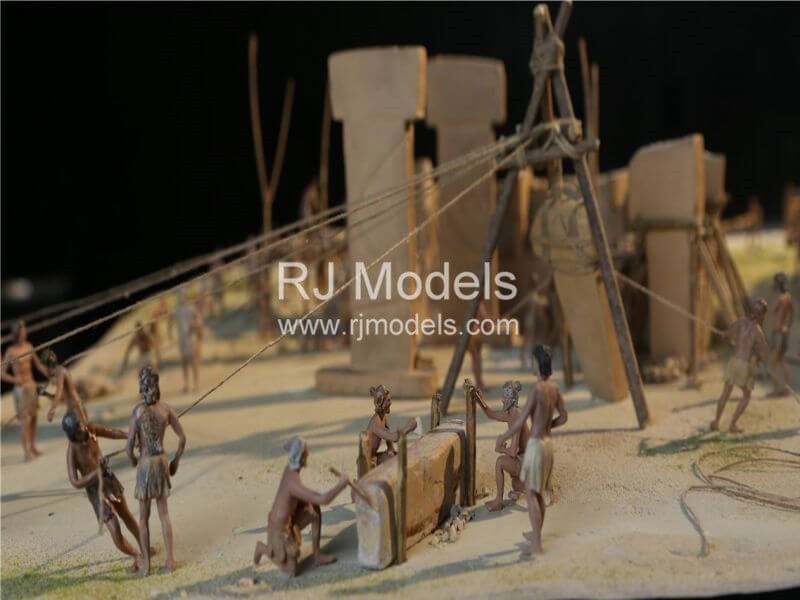 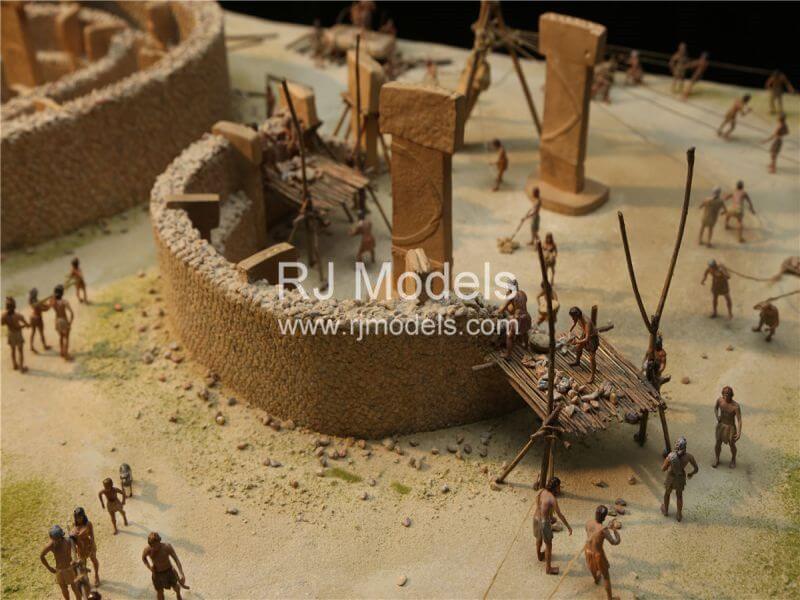 It was possible to speculate that the ancestors used a series of communication languages to assign and execute their task during the construction process. 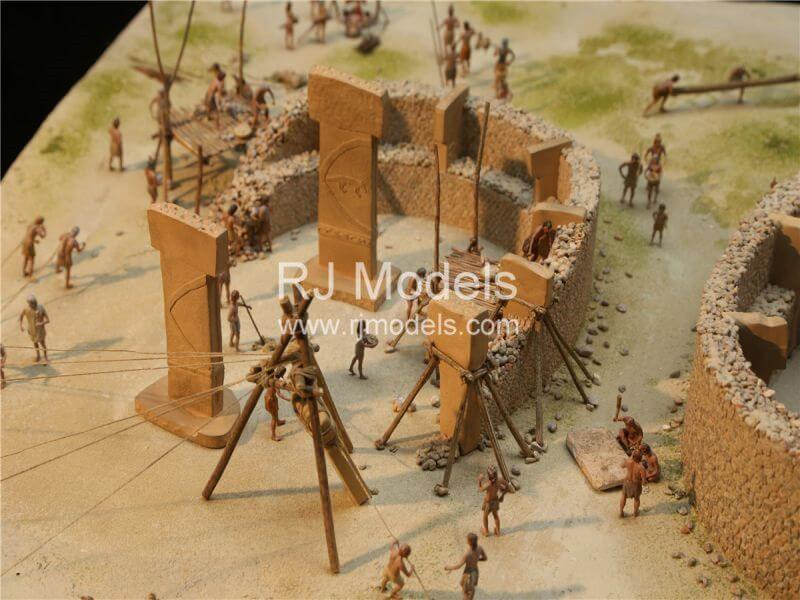 Even though scripts were non-existent, the use of language to communicate was sufficient to meet the needs of the team co-operation.

The life of ancient humankind of Göbekli Tepe model

To reflect the prehistoric hunter-gatherer way of life 12,000 years ago, RJ Models used handcrafted, human figures complete with clothing, accessories, and weapons on their model.

The vividly crafted muscles and limb movement brought out the vitality of the chief. 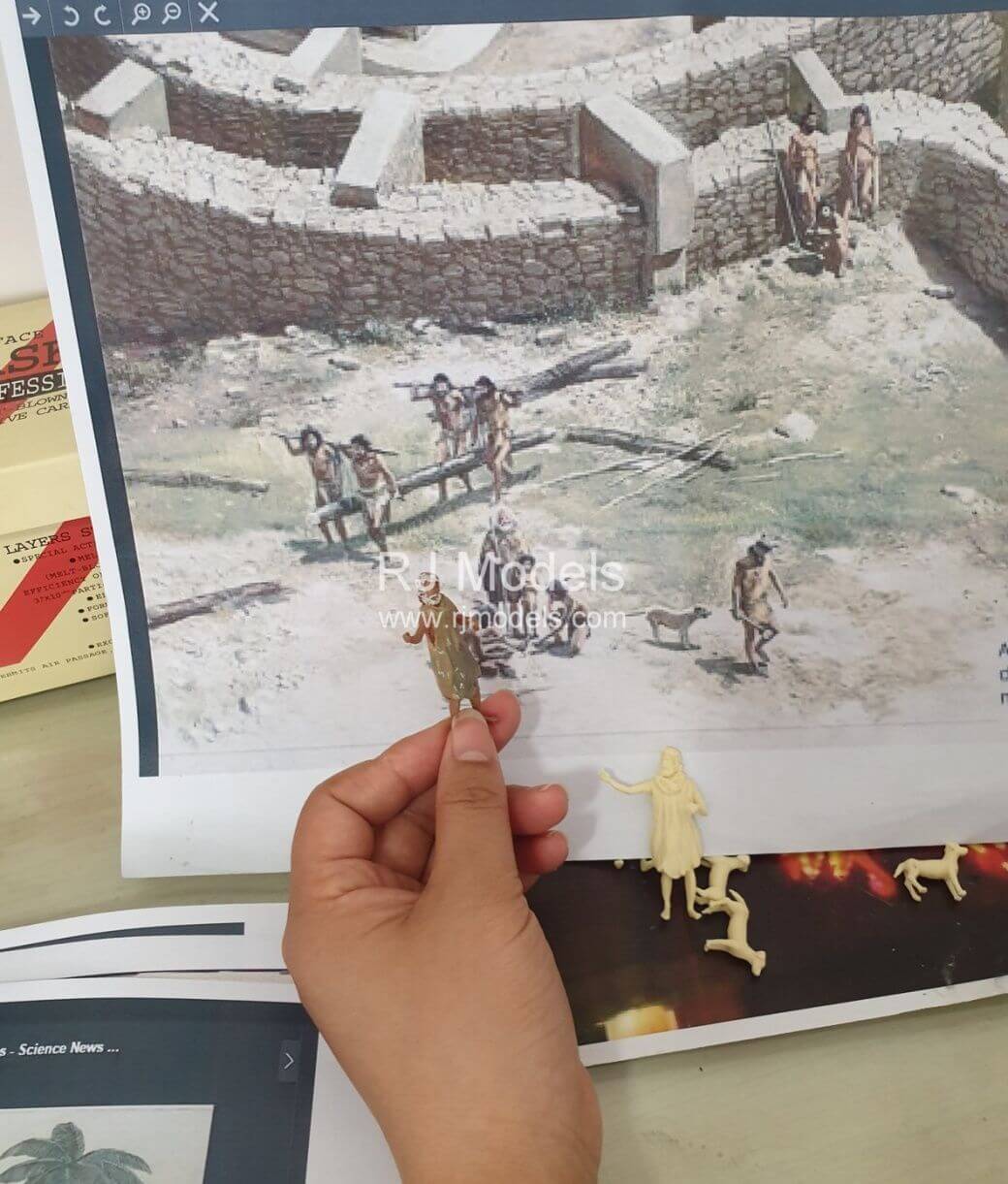 Every human figure is custom-made, and each one of them is unique.

The chief directing the work at the building site looks stern.

That is probably the earliest foreman.

There are several hundred people divided into different groups: logistics, people to hoist the stones, bricks layer, and cookers. All with a clear division of labor. 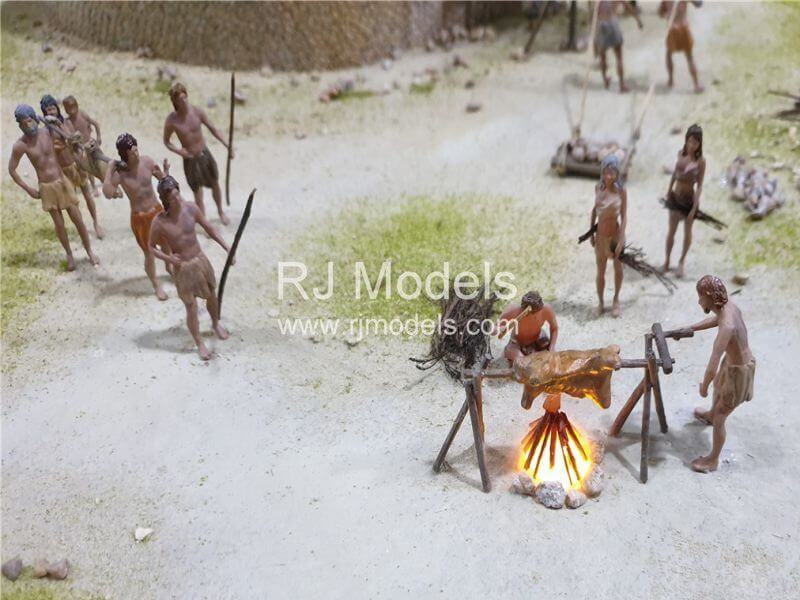 One can imagine the smell of the roast that is prepared by the cooking team filling the air.

The creation of the scenario, to reflect the teamwork between the groups during this era, is the primary role of the model. 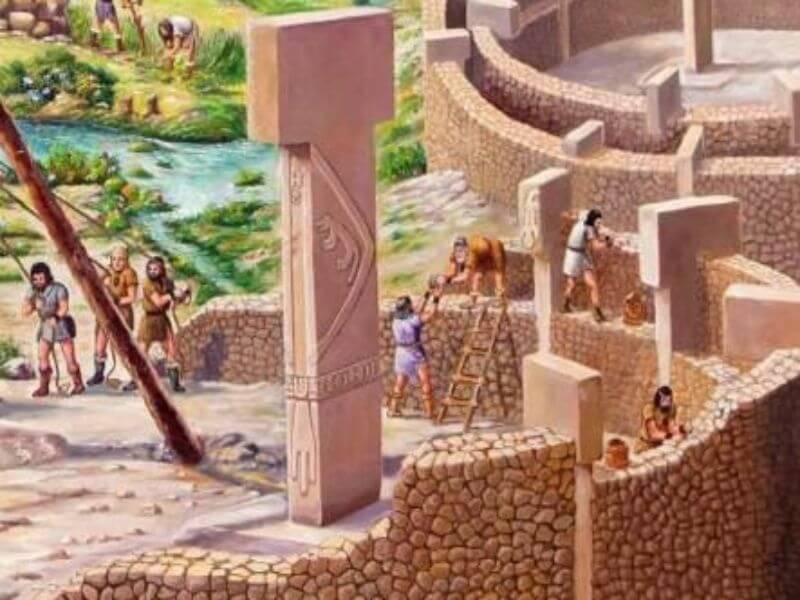 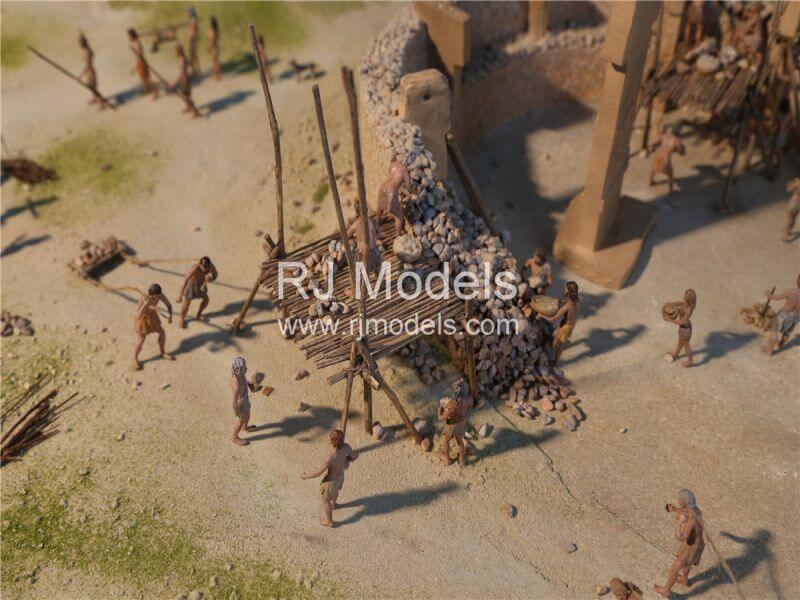 The coordination between the teams was well-organized

Currently, archaeologist excavated not more than 15% of the ruins.

It has, however, already overturned many speculations on the history of human development, from many angles within the archaeology community.

Before the discovery of Göbekli Tepe, the Sumerian was the earliest known civilization.

However, this standpoint may change now.

Humankind learned how to farm and survive in a fixed society before they have the time, the organization, and the natural resources to build temples. 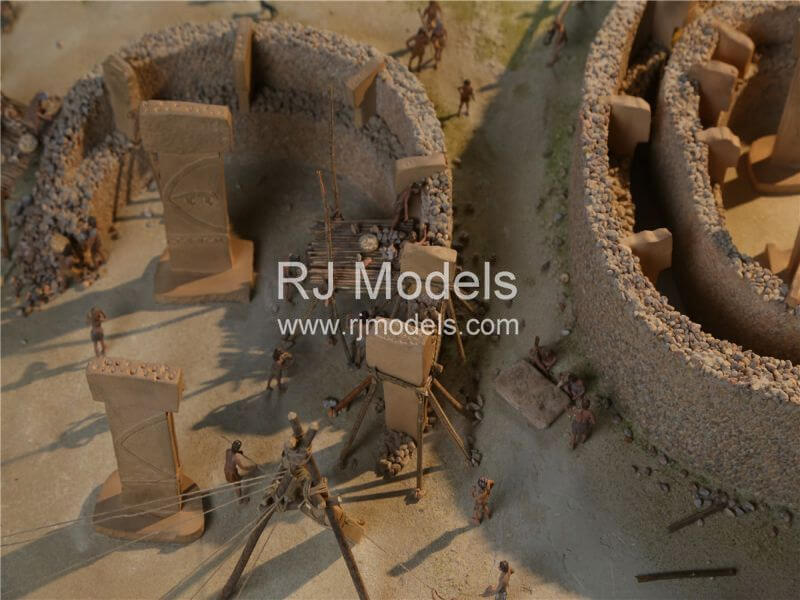 The astonishing thing about Göbekli Tepe is that it overturns the above theory.

It is more likely that religious practices or worship drive humankind to build a prominent place.

It is through this construction process that humanity learned to live in a fixed location, and from here they learned to farm.

With the continuation of the excavation work, there will be more surprises. The model of Göbekli Tepe seems like an ancient version of “Minecraft.”

Imagine the scene from “Night at the Museum” and wonder if one day, the prehistoric man will walk out of the ruin to see the modern civilization. It offers a range of top quality architectural model with a tight deadline for competitive rates.

At every stage, RJ Models aims to provide top-quality architectural models to boost our client’s business to all architecture in the world.