A catamaran model is a type of maritime model with two equal-sized hulls held side by side.
The wide bridging frame connecting two parallel hulls stabilizes the maritime model. It is propelled either by sails or motors. The catamaran model shows how cleverly designed and structured this ship is.
You can not only grasp the general shape of the ship, but also examine components, such as sails, cockpit, etc.
Walking around the catamaran model, you can envision yourself delightfully chatting in the salon, or lying on the fabulous sundeck.
So catamaran model plays an essential role in their processes of work for you.
They ponder over problems while staring at maritime models and thus came up with fantastic ideas! 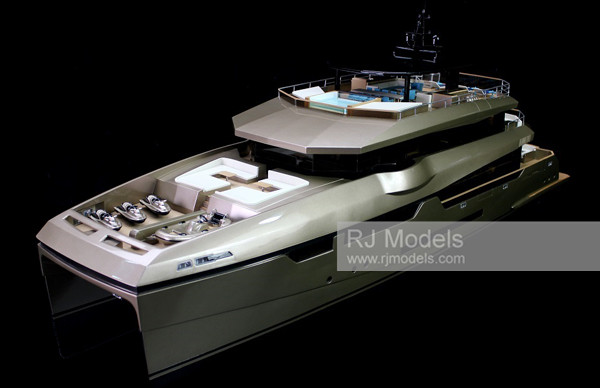 Simple Steps to work with us for custom Maritime Models 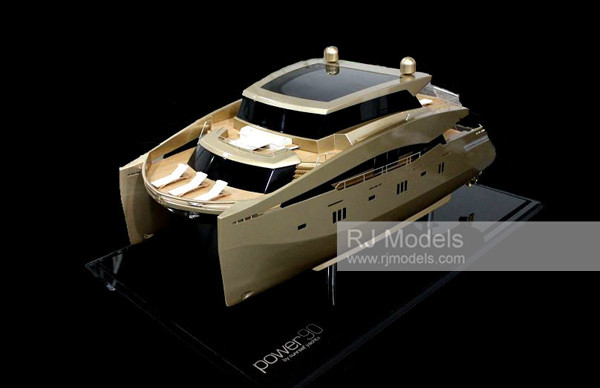 Even though most power cruising catamarans have misnomers such as “pocket” or “cuddy”. The Power C90 designed by Aspen will never give you a feeling like that.
Designers from Aspen have put many hours into designing and full-scale model building. It dedicates to getting all the right elements at the right scale, not at the expense of economic efficiency.
Instead, because of the adoption of asymmetric hull design which uses only a single-engine, rather than the normal twin engines. Its fuel-efficient and hydro dynamically efficient have exceeded other power catamarans.
The production of the catamaran hull costs our yacht model makers a lot of effort. Its asymmetric design requires two different suits of modules, which must be assembled very carefully.
However, once the sophisticated and consummate catamaran model shows in front of everyone and received abundant appreciation from viewers. We know all of the previous efforts are worthy.

With over 500 ship models being created every year, we thrive on maintaining consistency of delivering high quality ship models.

Our ship model makers possess a broad range of experience,with a high reputation for being specialists within our industry.

RJ Models has an extensive team of multinational and experienced shipping professionals in place with tight deadines for your ship models.

Some of Our Clients

Our vision is making the top quality maritime models to everywhere in the globe.