Architectural models tell vivid stories so much better than any other kinds of presentations in Korea.

RJ Models has evolved over the last 26 years from a small-scale model making workshop to a world-class key-player company.

And it takes the leading position in the model making industry in Korea.

Ours headquarter in Shenzhen, and branch companies in Dubai and Istanbul combine expertise in architectural model making techniques.

With the deep and professional understanding of the contemporary design trends and demands in Korea, to produce bespoke scale models.

And Korea’s culture and distinctive architectural accent give RJ Models the chances to fully engage in the art.

This is an office building model in Busan, South Korea.

Busan located on the southeastern tip of South Korea, which is Korea's largest port and second largest city.

And it is one of the busiest ports in the world.

It has always been the link and bridge between an East Asian continent and marine culture.

The architectural model wasd designed by SOM, this Lotte office building has been modified to complement the existing “roof garden”.

It allows customers to maximize the spectacular views of Busan Harbor.

When RJ Models made this architectural model, they put so much energy into the details.

The scale model making experts deliberately created a curved screen that can actually play the show and restore the scene.

In addition to the overall production of the model, RJ Models also produced a 1:100 scale detailed roof model of the building.

It shows the structural aesthetics of the entire office building in Korea.

Longshan District is a concentrated area of electronics technology industry and a wealthy area in Seoul.

It is a landmark office building designed by SOM.

SOM is a world-class architectural firm that specializes in a super high-rise building.

Previously, SOM had cooperated with RJ many times in Dubai and Japan.

This office building model is another successful cooperation between them.

The outer curtain wall of this office building composed of the triangular.

And it makes the architectural model need to pay attention to the precise contrast of the angles.

Any tiny mistake will ruin the whole model.

At the same time, there are two different directions of texture on the triangular curtain wall.

The modelers from RJ Models must also consider the exact same docking when they are made separately. 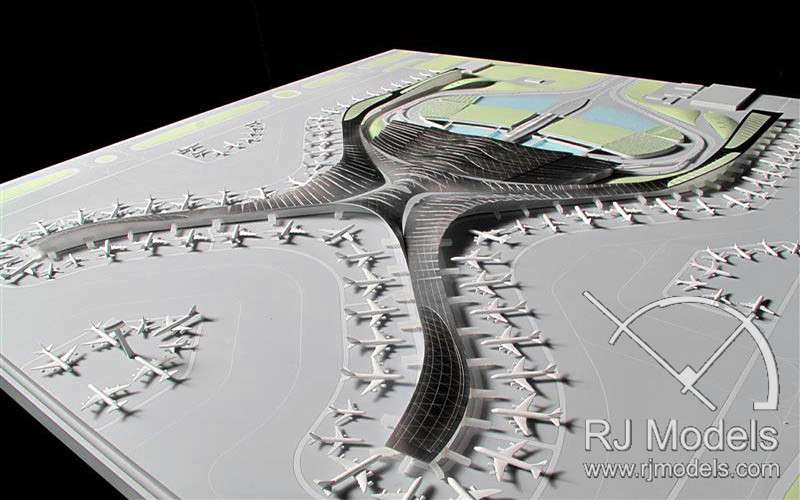 Incheon International Airport Terminal 2 is going to become the main airport in Seoul, advanced sustainable development technology is used to create an efficient, healthy and comfortable environment for people.

The form of the terminal is inspired by the Asian phoenix; in South Korea, it is a mascot that symbolizes authority, longevity, strength, and balance.

The designers integrate a large number of local logos and graphics to echo Korean cultural traditions; for example, local granite and traditional wood are used for the airport floor. 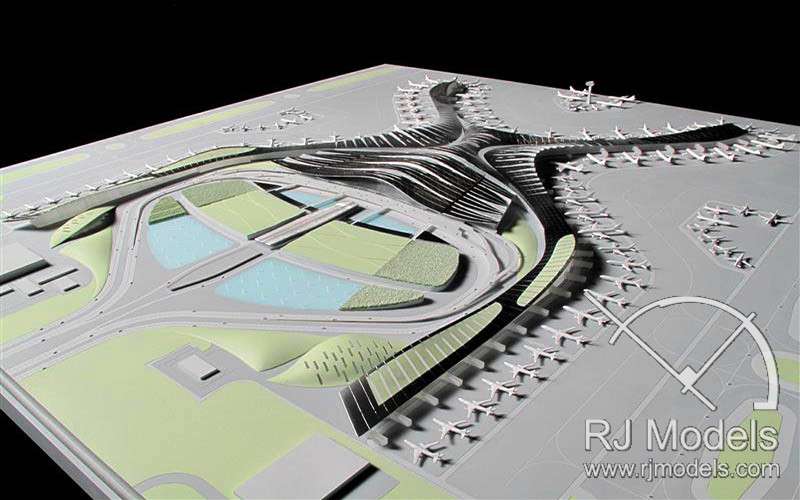 In order to make this airport model perfect, the architectural model makers maintain close communication with the designers.

And they obtain a large amount of detailed drawings from them, lays a good foundation for the model making process.

Architectural model makers spray silver-gray metallic materials on the surface to express the metallic texture of the actual material.

The model is in 1:1500 scale and only in such a small scale can fully display the entire airport.

Despite this, architectural model makers still do their best to add rich scenes in the model.

For examples, model airplanes and baggage carriers, to simulate the real scenarios of an airport in Korea.

In order to transport the model to the exhibition site unscathed,  our professional transportation team to deliver the architectural model.

This is a geographical display model of a university town in Korea.

The high and low undulating terrain, numerous buildings and the pursuit of aesthetics have made RJ Models spend a lot of time on this architectural model.

Since the university town is located on a hilly landform, the terrain is undulating, and architectural model makers build this unique terrain by stacking thin wood plates. 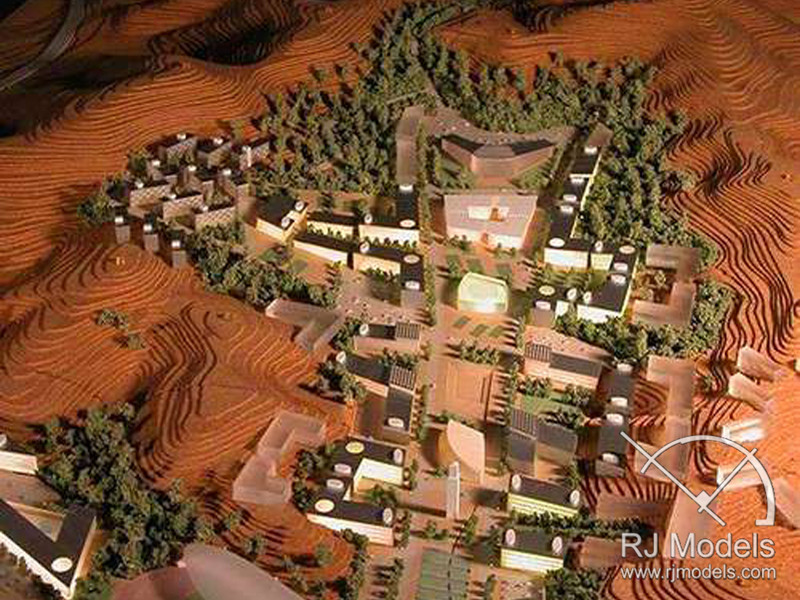 For the staple buildings in the site, model makers truly restore the designers’ intentions and ideas, covering the white walls with black ceilings and engraving sufficient details on them.

For those relatively less important buildings, frosted acrylic blocks are used to outline their shapes, and making a contrast.

This school model is going to be used in exhibition and show government officers and public the future planning and development of that region.

Through it, both local residents and college students, who are coming to study here, can intuitively understand the future life scene.

In order to ensure that the transportation of the architectural model, during the model making process, model makers have divided the model into several parts and mark the serial number in advance.

So the RJ Models’ logistic team can assemble them on site after those scattered parts have been transported to Korea. 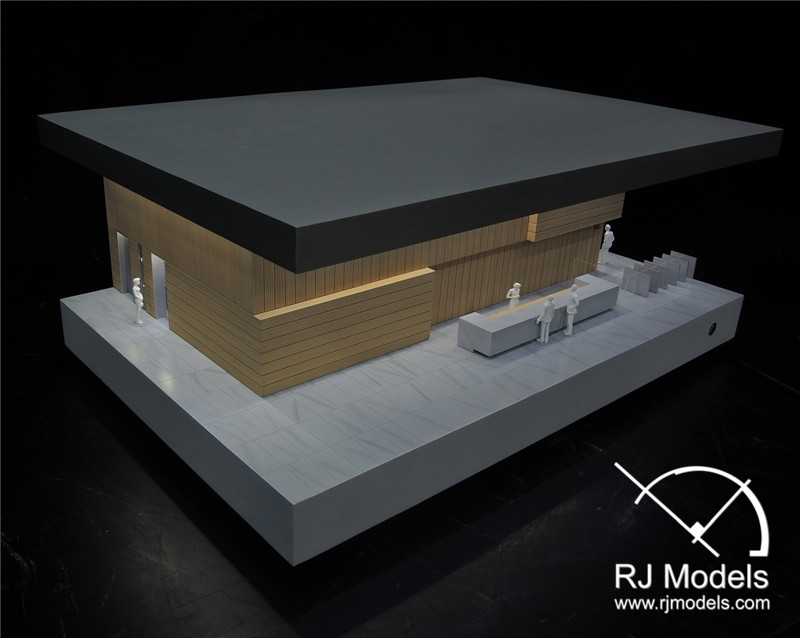 This interior model is for the lobby of Doosan Tower, also known as Doota.

Terry Farrell is responsible for the design of this lobby, who has garnered a strong reputation for contextual urban design schemes.

As well as exuberant works of postmodernism such as the MI6 Building.

As the designer, architectural model makers choose pure and noble materials for the architecture and viewers can have the exalted feeling at the first glance.

Black marble is adopted for the display base of the lobbying model and reflects the rock-specific patterns under the dim light, echoing the lobby's white marble floor.

Reception desk locates in the center of the model, where is easier to form the focus of the sighting.

So, model makers deliberately install several scale people at that place to mimic the checking in and conversation scene in real life.

It is worth mentioning that although the model is small in size and does not have too many curve elements.

Model makers still use CNC engraving machine to cut each tiny part to ensure that the edges of each piece are neat and sharp, matching the noble status.

For the floor slab, model makers use a thick dark gray PVC board to imitate the reinforced concrete slab in the real architecture in Korea.

SOM is one of the world's largest architectural firms, with the main design type of high-rise commercial buildings, and also a pioneer in international style buildings and “glass box” skyscrapers.

SOM has designed many super high-rise skyscrapers in the world, including the John Hancock Center, Willis Tower, and the Burj Khalifa.

In this Korean project, SOM maintains its consistent style, drawing out the shape of the building with a straight line.

Even the podium’s irregular shape is made by geometric flipping.

Out of the usual white PVC board, model makers also use metal materials in the model.

And they cover the surface of the tallest building with the hollow metal plate to illustrate the steel material facade in the design.

The usage of metal sheet greatly increases the realism of the architectural model, but due to the extremely high hardness of the material and the dense windows on the building surface.

It is a big challenge for the engraving work.

Model makers choose a light green model tree for this model, which looks bright and lively, balancing the alienation and hardness brought by the steel facade.

In the past cooperations with SOM, RJ Models has never let them down, always providing the perfect model for their competition.

And it display with its superb craftsmanship and high efficiency.

Hyundai Group is a consortium company that plays a pivotal role in the Korean economy.

SOM, one of the world-leading architectural firms, is responsible for designing of Hyundai’s new industrial park. 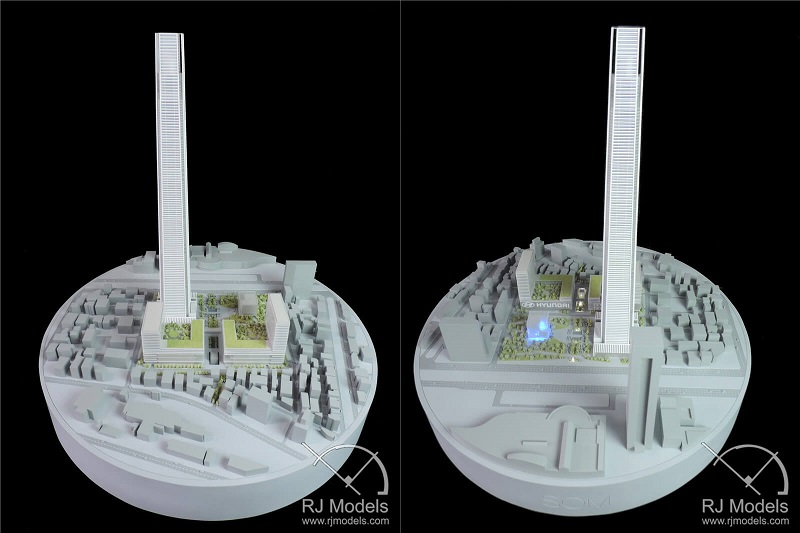 The industrial park is strategically located close to Incheon Airport and Incheon Port and can be reached within 3 hours from Tokyo and Taipei.

There is a super high-rise building over 600 meters located in the central of the industrial park and surrounded by several low-rise buildings.

Model makers place the triangular prism-shaped supertall building in the center of the model.

And the rest of the building is arranged on a circular base centered on it, according to the drawings.

CNC engraving machine is used to cut the facade of the buildings, which has better precision and cleanliness than manual cutting and costs less time.

For the other two relatively important low-rise buildings, the model makers put lawns on the roof of the building and carve Hyundai’s signs and slogans on the facade grille. 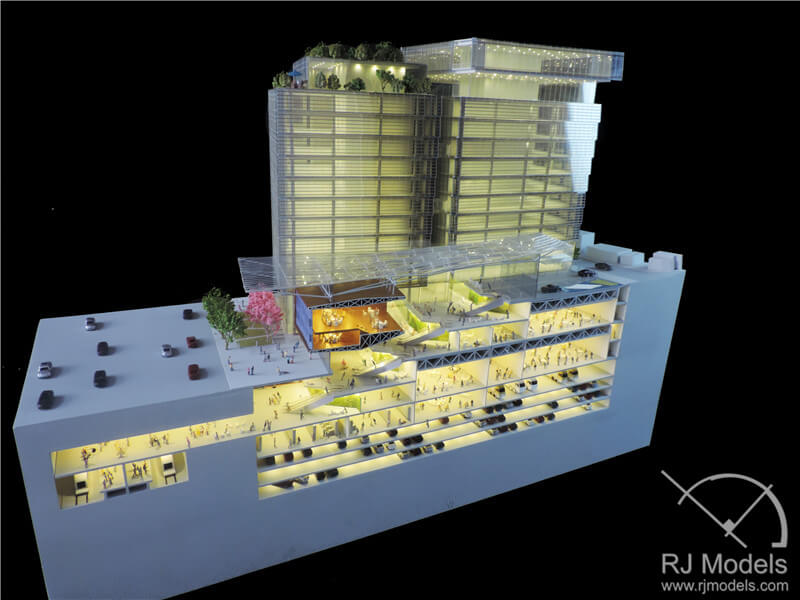 This is an architectural model of a commercial building in South Korea that contains a shopping mall, an apartment building, and a three-story underground car park.

In the design process, the designer incorporated the subway connection into the design.

Architectural model makers use a white PVC box as the base for the model and cut one side to show the audience the internal structure of the building; from this sectional perspective.

The viewer can clearly see the system of the building, including floor slaps, trusses and etc., which are difficult to observe in daily life.

In order to render the real-life atmosphere, different colors of lights are installed in the commercial model.

And not only light the interior of the architectural model, but also reveal different functional areas for customers. 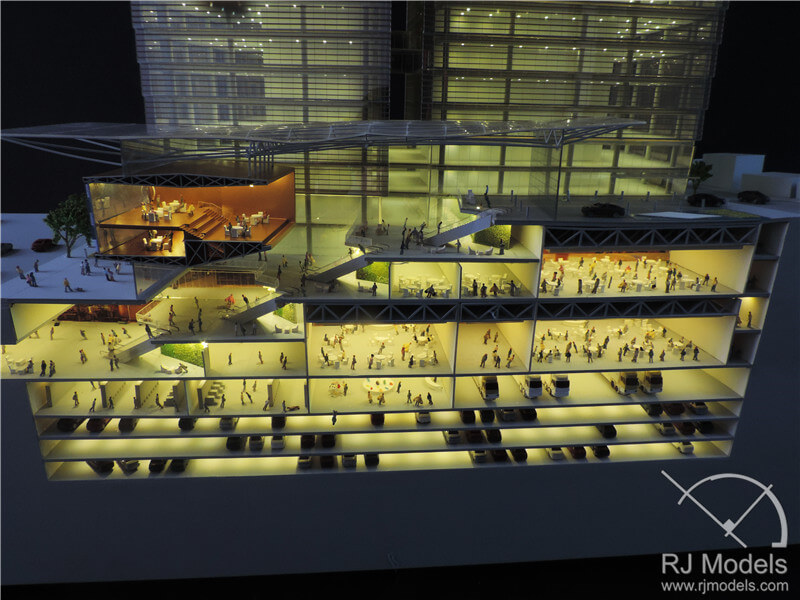 So the model makers choose high-transparency plexiglass as the façade material and cut the outermost layer façade with a CNC engraving machine to illustrate the modern style.

Lastly, there are many scaled people, cars, trees in the model to reproduce the shopping and traffic scenes in life.

Skidmore, Owings & Merrill LLP (SOM) is one of the world's largest and most influential architectural, interior design and urban planning firms.

Since its founding in 1936, they have completed thousands of projects all over the world.

Their reputation stems from the landmarks they create and the relentless pursuit of excellence in design, innovation, and sustainability.

Just because of this, SOM has cooperated with RJ Models form many times.

On the condition that RJ also has a pursuit of perfection in architectural model making.

This is another high-rise official building that SOM designs in Korean and sustain its consistent modern style. 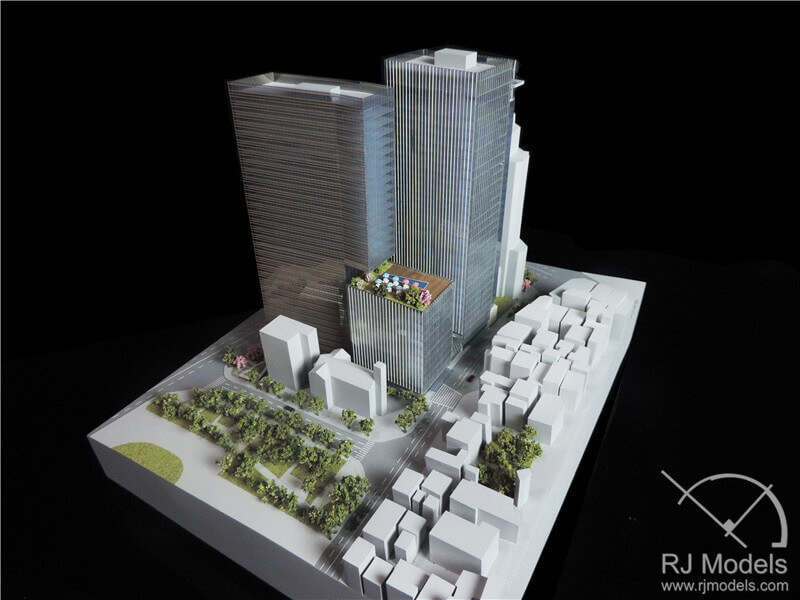 Model makers use plexiglass to make the main building and use unique forging techniques to carve and cut the glass surface and make it more like a real building.

The main buildings’ floor slaps and core tubes are made of white PVC sheets, as well as other relatively unimportant buildings within the site.

The architectural model is set on a gray pedestal and the road is outlined with white lines, creating correspondence and subtle contrast with the buildings.

In addition, in order to eliminate the feeling of dullness brought by large-area metal and glass materials.

The modelers tend to use colors with higher saturation and brightness in the selection of scenes on this site.

And it perfectly balance the overall feeling.

So far, RJ Models has produced a good deal of precise and delicate scale models for clients in Korea to support their planning presentations, public consultations, government approval, and marketing.

It does not only help the real estate developers in Korea to improve sales figures.

But also give the Korea design companies precious mementos of their hard work and achievements.