It is well known that port terminals are the dominant infrastructures that promote city development as well as drive the urban economy.

The port terminal model is an ideal tool that helps to optimize the port and terminal design in the planning stage and the construction process.

A port terminal model may consist of several individual ports with different functions, floating transfer stations, and other supporting facilities.

As the central part of the port terminal model, the terminal model itself needs to ensure it can undertake the estimated passenger flows of both vehicular traffic and the public.

And that’s why most port terminal models have lots of model vehicles and figures added to mimic the bustling Scenario.

The port terminal model is really helpful in the planning and development approval process and in a circumstance where citizens need to know how the new proposed project will affect their future life.

Whether the port terminal model is being displayed in the boardrooms or exhibition halls, it is also a great marketing tool to attract investments or donations for the developer. 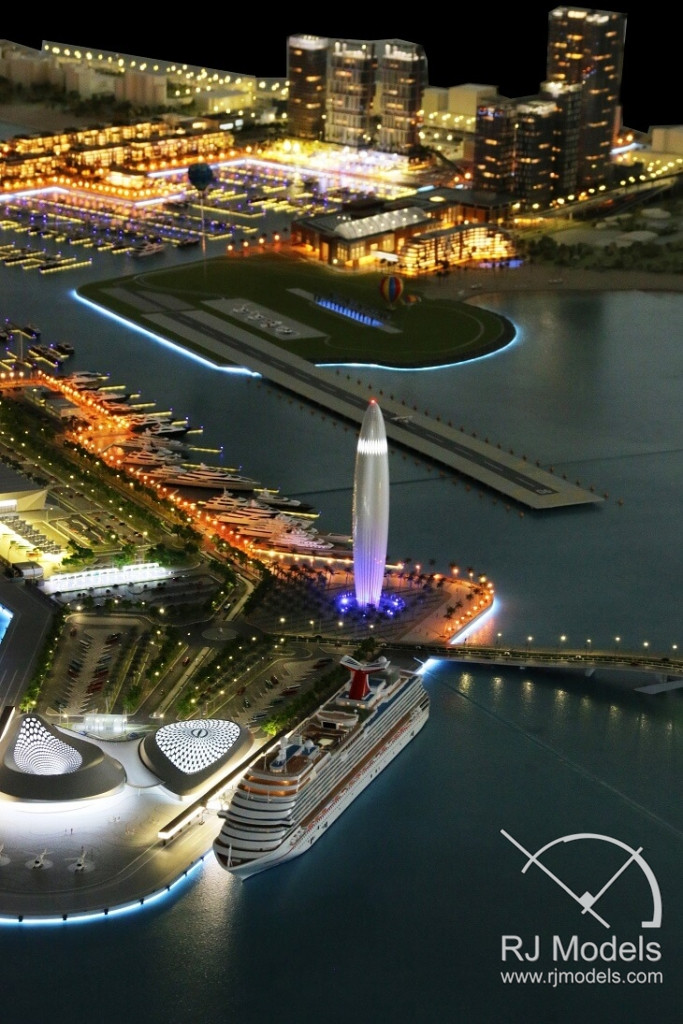 Simple Steps to Work With Us for Cruise Terminal Model 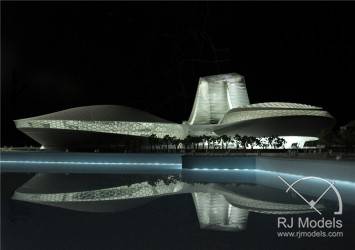 Streamlined architectural design of a building with its beautiful structural variations is often very eye-catching to the viewers.

The use of a uniform color tone when creating such a terminal model makes the lines and silhouette of this kind of structure even more prominent.

The carving machine that carves a pattern on the surface of the terminal model gives the model an intensified sense of structural mass.

The engraved pattern resembles that of a coat covering the terminal model, further enhancing its physical appeal.

The natural contour of Keelung Gateway Port Terminal is a reflection of the landscape of this seaside city.

A connecting terrace interweaves the 70 meters tower with the two port terminal buildings.

The bee-hives skylight windows provide the primary lighting functions and the plants in the central atrium add an abundance of greenery to this elegant structure that has undulating circulation route flowing through the building.

From the terminal model, it is clear that Asymptote plans a generous walking space for the public.

The pathway that flows smoothly from the harbor front to the passengers terminal maintains an inseparable link between the interior space of the building and the outside area.

In this way, the bustling crowds at the dock and the city life both get drawn into the building interior, effectively shortening the distance between the city and the port for departing and arriving passengers.

To portray a realistic display of this new landmark building, RJ Models integrates a large number of miniature human models and dock facilities, creating an overall feeling of warmth and vividness to the model. 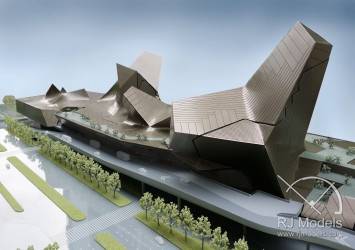 The design of Golden Gate Service Center Port Model by TWA is an annotation of today’s contemporary craftsmanship and style of a building.

We can see this by viewing the port model. The building uses curved perforated metal panels and glass surfaces to form a series of crystalline structure penetrating from the roofs creating an extraordinary dynamic and highly distinguishable feature.

It is, therefore, natural to possess a high expectation of the skills needed in the production of this model. From the gentle transition of the interface at the folds and the joints of the building structure, they are all test of RJ Model maker’s craftsmanship and skills.

The components of the model join perfectly ensuring that the structure moves from the horizontal roof upwards to a vertical formation that gradually evolves into a soft silhouette.

Even though the vertical structure protrudes in different directions, the result is an elegant crystal-like building, senseless but classy.

The entire architectural model speaks deconstructivism. The color separation of the paint is exquisite and gives the facade a perfect equilibrium of a structure that is calm, majestic and yet elegant.

It is impossible for the model not to attract visitors’ line of sight when it comes to the meticulous details such as the trails lined with miniature trees, the delicate mini traffic signs, and the bright lightings that illuminate the entire model scene. 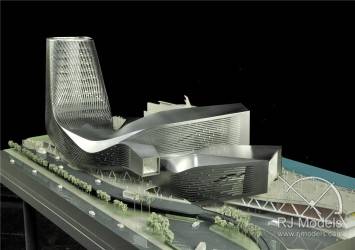 A sleek and long span outer shell with glazed slits following the curve of the structure covers these individual blocks.

The glazed opening of the facade not only provides sufficient light to the interior of the building but also amplifies the internal space and the visual experience.

The port model is constructed using stainless steel and exudes an air of sternness to the structure.

The rigorous and cautious cutting process by the model makers, allows the components to join seamlessly into one structure.

The bright and white interior lighting system brings out the undulation of the structural design, enhancing the model’s artistic feel in the night scene.

The vehicles miniature models use transparent materials, which undoubtedly added a little mystery to this futuristic undulating building.

Crowds of miniature human models in different posture and manners dotted around the cave-like interior of this beautiful piece of artwork.

The entire model scene brings to life a structure that would otherwise only appear in a movie. 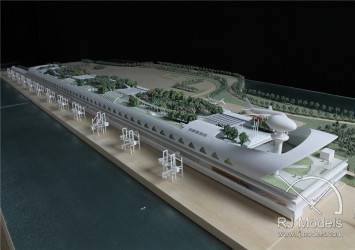 Model making is a precise and meticulous task that requires patience.

The lush plantation on the roof forms the park area that stands like a mini forest.

On the landscaped terrace is the distinctively cut solar panels.

The terrace railing is a wall lined neatly with triangular windows and the walls extend upwards towards the center to form the canopy.

The whole building provides 5,600 square meters of commercial area. Upon completion, the cruise terminal building can handle up to 3,000 passengers per hour.

There is also a visitor service center. At the front end of the building model is a heliport, providing the opportunity for the tourists to have a helicopter tour of Victoria Harbor.

Unusually, the port model maker sits the terminal model on a wooden panel.

The natural texture and wood vein complement the white outer shell of the port model building and the lush green plants of the terminal model.

The entire set up creates an attraction that is also visually pleasing. 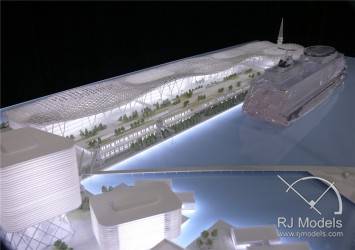 The port model constructs with white material together with the roof terrace open space design concept gives the entire model a sense of transparency.

Rod pillars lifted the undulating canopy, which resembles that of the waves above a spacious public square area, resulting in a structure that is graceful and elegant.

The two-tier roof of this port model is the design focus of this project and consists of hollow patterns carved out by a 3D engraving machine on the curved surface.

When the light shines through the rooftop, it casts lattice shadows onto the ground of the public square as if dressing the building with a layer of gauze.

Other than highlighting the transparency of the model cruise ship with plexiglass, many thoughts also go into the model lighting arrangements.

The model makers design a LED light belt that goes in the join between the model terminal ground and sea and goes around the model.

That provides an illusion that the cruise terminal is floating on the water, and at the same time giving the port model a sublime feel. 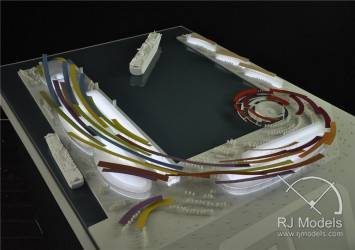 Fluttering ribbon-like structures link each of these modular buildings.

While small public squares make the transition from one building to the next with scattered corners that give these public spaces a natural advantage for creating surprises.

The relatively distanced relationship between a city and its airport model is different from the very close connection between a port and a city.

The involvement of small public squares can result in the coastal city glowing with new vitality.

Looking at the port model of the harbor with bird’s eye view, visitors can prognosticate the interesting space and the poetic landscape design.

The port model can also help architects explain their design concepts to the design judging panel and the public in a more vivid way.

RJ Models possess a wealth of experience in the field of manufacturing models for competition.

The ingenuity used in their design plans allows the port model to speak and also to give it artistic sense. 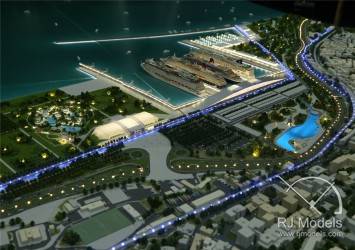 The city planning model of Istanbul is enormous.

As Turkey’s most significant travel destination, seaport and industrial center, the harbor plans in the Istanbul city plan model is naturally the most eye-catching segment of the exhibit.

Besides the use of cool colors LED lighting system to bring out the mysterious property of the ocean, the port model also delicately presents the geometrical planning of the city’s green space against the harbor with a pleasing model climate design.

The cruise ship and yacht model on display that comes with a surprising number of realistic details is a show of RJ Models mastery of model making skills.

The neat presentation of the cabin windows, the exquisite quality of the decking’s, and the precise evenness of the spray paint is undoubtedly proof of the model makers in Tuekry‘ meticulous craftsmanship.

The sturdy and yet smooth material used on the cruise ship model exudes a noble and luxurious atmosphere.

The lights on the coastline outline the gorgeous silhouette of the harbor, giving the people the coastal boundary and the bustling night scene characteristic of a seaside city to look forward to.

Why RJ Models Can Make Your Model The Top

RJ Models has an extensive team to ensure the highest-quality result whilst complying with tight deadlines.

Our Shenzhen factory prides itself as the largest facility of its type in the world since 1995.

RJ Models has an extensive team is committed to individual customer solutions and ensuring quality in whatever we do.

Our priorities include distributing our installations exclusively and worldwide.

Some of Our Clients

Global Shipping For Any of Cruise Terminal Model

Send us Your Project!
Scroll to Top